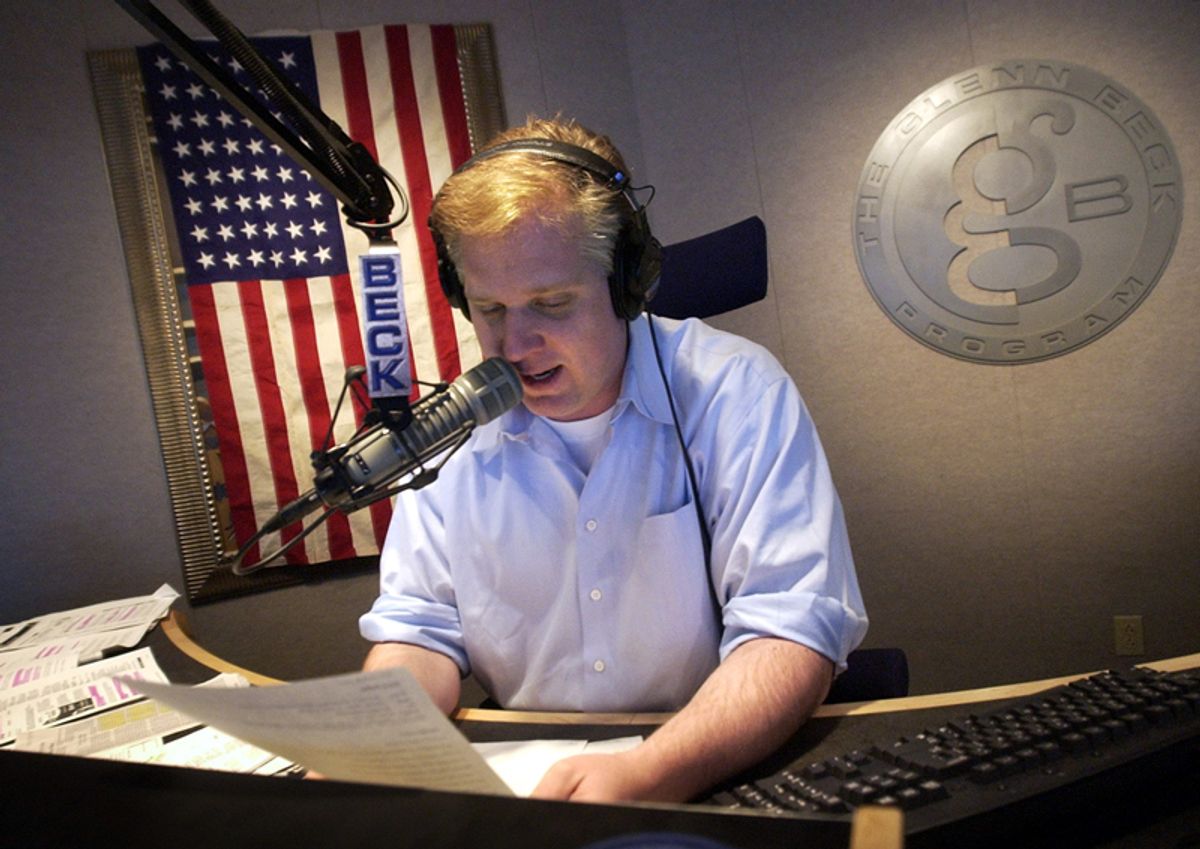 ** FILE - HOLD FOR STORY BY MANUEL VALDES ** In this March 12, 2003 file photo, conservative radio and television personality Glenn Beck is shown doing his radio show in Bala Cynwyd, Pa. The mayor of Mount Vernon, Wash., plans to give Beck, now a Fox News Channel personality, a key to the city on Sept. 26, 2009, a move that has drawn protests in Mount Vernon, where Beck spent part of his childhood. (AP Photo/Mike Mergen, file) (Mike Mergen)
--

On his Monday radio show, Glenn Beck highlighted claims that before he started targeting a little-known, left-leaning organization called the Tides Foundation on his Fox News TV show, “nobody knew” what the nonprofit was.

Indeed, for more than a year Beck has been portraying the progressive organization as a central player in a larger, nefarious cabal of Marxist/socialist/Nazi Obama-loving outlets determined to destroy democracy in America. Beck has routinely smeared the low-profile entity for being staffed by “thugs” and “bullies” and involved in “the nasty of the nastiest,” like indoctrinating schoolchildren and creating a “mass organization to seize power.”

As Media Matters reported, the conspiratorial host had mentioned (read: attacked) the little-known progressive organization nearly 30 times on his Fox program alone since it premiered in 2009, including several mentions in the last month. (Beck is the only TV talker who regularly references the foundation, according to our Nexis searches.)

So, yes, Beck has done all he can to scare the hell out of people about the Tides Foundation and “turn the light of day” onto an organization that actually facilitates nonprofit giving.

And guess what? Everybody in America would have found out about the Tides Foundation last week if Byron Williams had had his way. He's the right-wing, government-hating, gun-toting nut who strapped on his body armor, stocked a pickup truck with guns and ammo, and set off up the California coast to San Francisco in order to start killing employees at the previously obscure Tides Foundation in hopes of sparking a political revolution.

Thankfully, the planned domestic terrorist attack never came to pass because California Highway Patrol officers pulled Williams over for drunk driving on his way to his killing spree. Williams quickly opened fire, wounding two officers during a lengthy shootout. Luckily, Williams wasn’t able to act out the ultimate goal of his dark anger -- fueled by the TV news he watched -- about how “Congress was railroading through all these left-wing agenda items,” as his mother put it. Williams wasn’t able to open fire inside the offices of the Tides Foundation, an organization “nobody knew” about until Glenn Beck started targeting it.

And thankfully, Williams wasn’t able to take his place alongside a growing list of domestic, anti-government terrorists, such as the recent Pentagon shooter, the Holocaust Museum gunman, the kamikaze pilot who flew his plane into an IRS building in Austin, Texas, and the Pittsburgh cop-killer who set up an ambush because he was convinced Obama was going to take away his guns.

All the vigilante attacks appear to have been fueled by an almost pathological hatred for the U.S. government -- the same open hatred that right-wing bloggers, AM talk radio hosts, and Fox News' lineup of anti-government prophets have been frantically fueling for the last year, pushing doomsday warnings of America's democratic demise under President Obama.

And the sad truth is we’re going to see more like Byron Williams. We’re going to see more attempts at vigilante violence during the Age of Obama simply because the right-wing media, led by Beck, continue to gleefully (albeit irresponsibly) stoke dangerous fires with the kind of relentlessly incendiary rhetoric that has no match in terms of modern-day, mainstream use in American politics or media.

And don’t forget about the unhinged response when healthcare reform was passed in March: “Get down on your knees and pray. Pray. It's September 11th all over again, except that we didn't have the collapsing buildings.” After financial reform passed last week, Beck told his audience, “Your republic is over.”

Meanwhile, Andrew Breitbart’s website recently tagged Obama as the “suicide-bomber-in-chief,” while the conservativeWashington Times just last week published an Op-Ed -- by a former congressman, no less -- asserting the president poses more of a threat to America than al-Qaida.

Note that the radicial right’s media rhetoric is no longer even political in a partisan sense. Instead, it’s purely revolutionary. It isn’t, “We think taxes should be lower” or “Obama should be more hawkish overseas.” It’s, “There’s an insidious and deadly plot afoot by Democrats and progressives to strip Americans of their freedom and this country of its greatness.” Obama is now the incarnation of evil (the Antichrist?), and his driving hatred for America, as well as for democracy, runs so deep that he ran for president in order to destroy the United States from inside the Oval Office.

Rush Limbaugh: "Our country is being overthrown from within."

And this summer, the latest toxic twist to that line of attack is that Obama is destroying America on purpose in order to exact revenge from white America for the historic sin of slavery. (Think: Black Manchurian Candidate.) The GOP Noise Machine is now mixing a vile cocktail by stirring revolutionary rhetoric with hateful race-baiting.

It’s impossible to argue that today’s avalanche of insurrectionist rhetoric doesn’t have a real-world effect. Or that those on the fringes don’t find comfort in seeing and hearing their worst fears legitimized on AM radio and Fox News.

The consequences of the doomsday programming seem entirely predictable. As Jeffrey Jones, a professor of media and politics at Old Dominion University, recently explained to the New York Times in regard to Beck's rhetoric, "People hear their values are under attack and they get worried. It becomes an opportunity for them to stand up and do something."

Indeed, the relentless message that right-wing audiences hear is unequivocal and inescapable: Do something! Take action!

And last week, Byron Williams, likely inspired by Glenn Beck's Tides obsession, grabbed his guns and set out to do just that.