The final lesson of BP

Not much has changed since the spill: Big money corporations are still free to influence politics 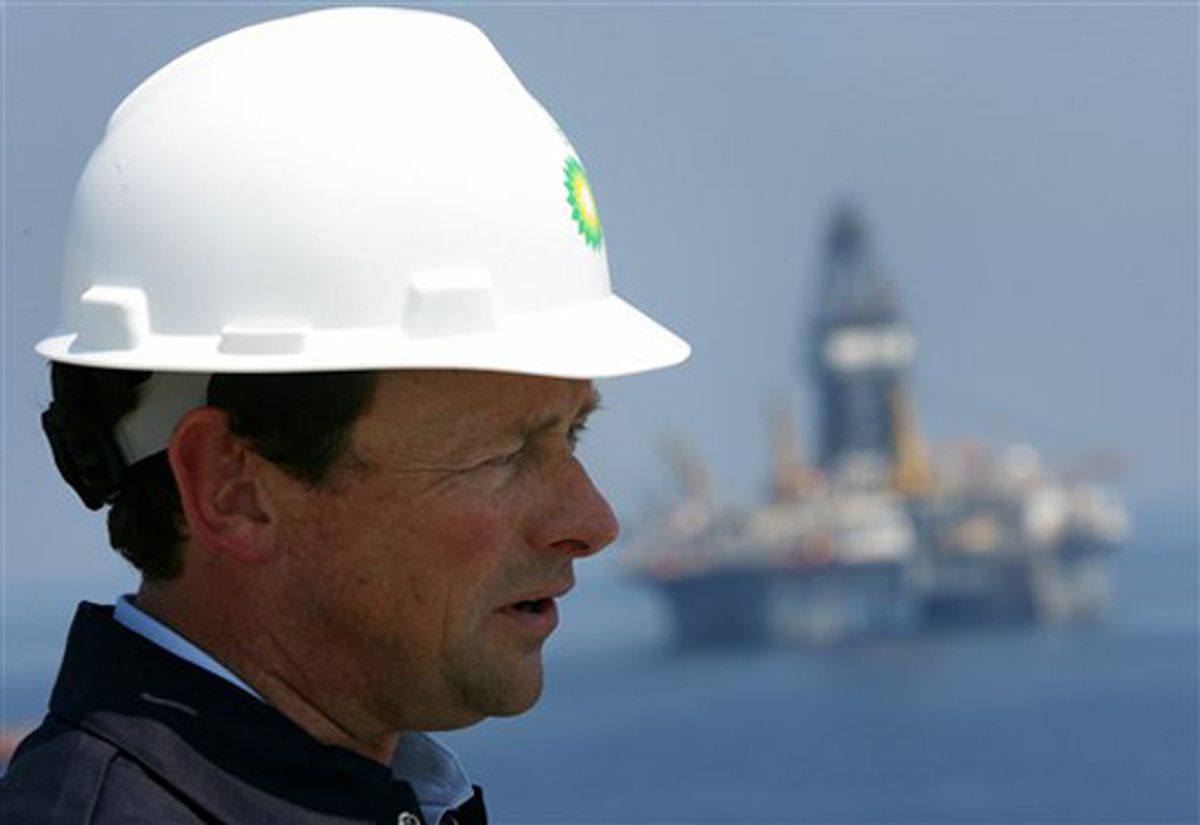 FILE - In this May 28, 2010 photo, BP CEO Tony Hayward is aboard the Discover Enterprise drill ship during recovery operations in the Gulf of Mexico, south of Venice, La. Hayward, who became the face of BP's flailing efforts to contain the massive Gulf oil spill, will step down as chief executive in October and be offered a job with the company's joint venture in Russia, a person familiar with the matter said Monday, July 26, 2010. (AP Photo/Sean Gardner, Pool, File) (Sean Gardner)
--

BP is starting over. It just named a new American president and its finances are looking up. BP’s second-quarter report showed surprisingly strong revenues of $75.9 billion, beating Wall Street’s estimates. (This includes a $32.2 billion writedown along with the $20 billion liability fund that the Obama Administration wanted.) The company has started to sell $30 billion of its assets to ensure it has all the money it needs to pay any liability claims. No wonder several Wall Street analysts are suggesting BP stock as a terrific buy.

It doesn’t seem to matter BP was responsible for the worst environmental disaster in American history. Consumers worldwide – including Americans – continue to slurp up its oil.

But wait a minute. If BP emerges from this debacle fatter and happier than anyone imagined a few months ago, whatever happened to the idea of corporate accountability? Does this mean any giant corporation can wreak havoc and then get back to business as usual?

Corporations aren’t people. They have no brains, no consciences, no capacity for intent or guilt. Every one of their moveable parts can be replaced, just like BP’s former CEO Tony Hayward was replaced. Corporate accountability and responsibility are meaningless concepts. Corporations exist for only one purpose: to make money.

If we want corporations to act differently, we have to force them to do so through laws that are fully enforced and through penalties higher than the economic benefits of thwarting the laws.

Here’s the real outrage: In the wake of the BP spill, essentially no laws have been changed – not even a ridiculously low cap on damages private parties can collect from oil companies. Senate Republican leaders said Wednesday they wouldn’t support a bill retroactively removing the liability cap; and not even Democrats Mary Landrieu (D-La) and Mark Begich (D-Alaska) will support it.

Why isn’t Congress doing more – not only removing the cap on civil liability but also raising the level of penalties oil companies have to pay for violating safety and environmental regulations, permanently prohibiting deep-water drilling, and enacting a carbon tax?

Because of Big Oil’s political clout.

The same anthropomorphic fallacy that accords human attributes to giant corporations like BP distorts clear thinking about how to limit their political influence.

Consider the grotesque Supreme Court decision earlier this year in Citizens United v. Federal Election Commission, which gave corporations the status of people with First Amendment rights to spend unlimited amounts of money on political ads. Citizens United ranks right up there with Bush v. Gore and Dred Scott as the most brainless and irresponsible Supreme Court decisions in history.

In March, the District of Columbia Court of Appeals decided that in light of Citizens United, there was no longer any basis for limiting contributions to so-called independent committees set up to support or oppose particular candidates. (Such committees are known as 527’s, after a loophole clause in the campaign finance laws.) The old contribution limit was $69,900 every two years. Now even that’s gone.

And the Federal Elections Commission has just interpreted these two court decisions to mean corporations, not just individuals, can now give unlimited amounts of money to 527’s.

To top it off, Tuesday the Senate failed (by only a few votes) to pass the “Disclose Act,” that would have forced corporate sponsors of campaign ads to reveal themselves and not hide behind innocuous sounding names like “Americans for America.” The bill also would have prohibited campaign ads run by U.S. subsidiaries of foreign companies. (Think BP.)

Now all the limits are gone and the gloves are completely off. Even BP, incorporated in the UK, is officially free influence American politics to its heart’s content.

The will of the American people is being subordinated to the demands of giant money-making machines called global corporations that can now spend or threaten to spend unlimited amounts of money in support of any politician willing to help them make more and against any who might cause them to make less.

This is the final lesson of BP.

What should you do? As with the loophole-ridden finance reform law, and the new health law that richly rewards Big Pharma — get angry, not cynical. Commit to getting big money out of politics, even if it takes us years.