This mismatched buddy comedy may be fake Apatow, but Carell and its dazzling cast get close to the real thing 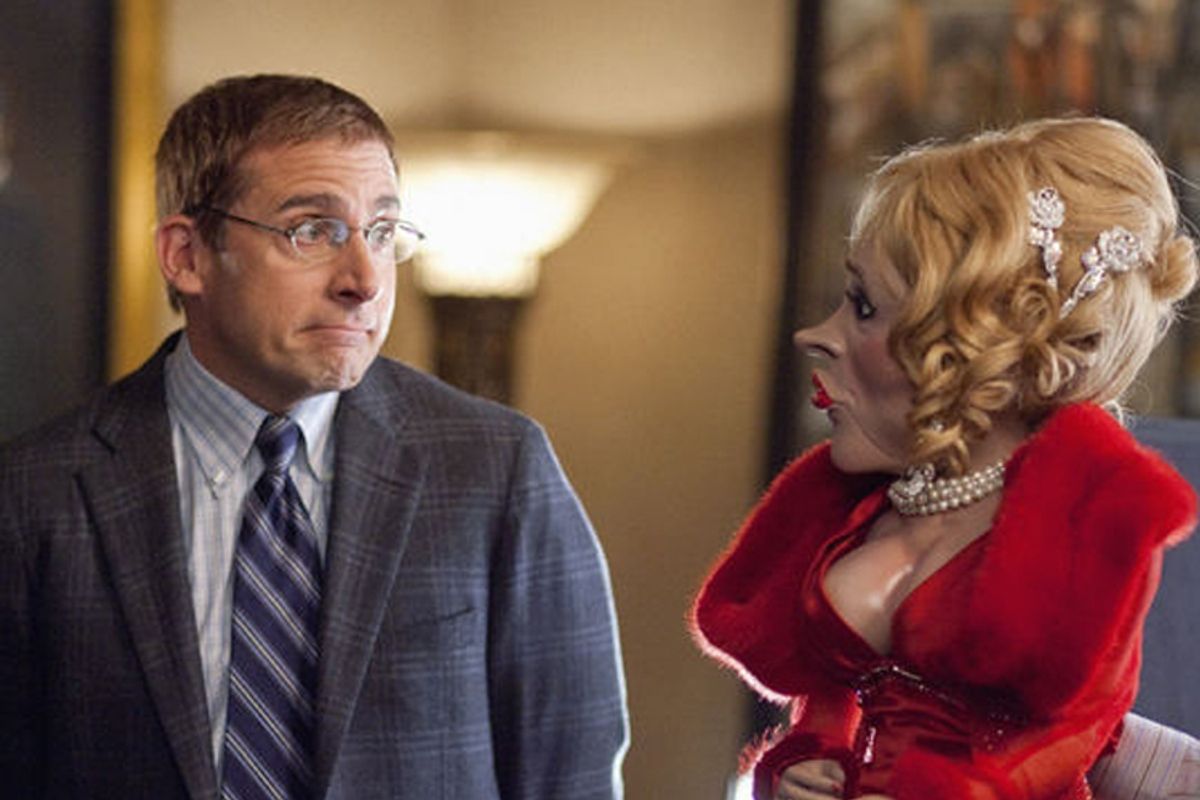 Steve Carrell in "Dinner for Schmucks."
--

American movie comedy operates within such narrow limits, most of the time, that even relatively minor innovations -- like the nerdy-absurdist sweetness, or nerdy-sweet absurdism, of current comedy king Judd Apatow -- can seem like a big deal. One sure sign that Apatow's shtick is descending into formula is how cannily it can be cloned in a minor but reasonably amusing Hollywood concoction like "Dinner for Schmucks." Adapted from a 1998 hit by French comedy veteran Francis Veber (released here as "The Dinner Game") and fueled by a lovable-loser star turn from rubber-faced Steve Carell, "Dinner for Schmucks" may be a more successful Apatow imitation than his last several films as producer or director.

I had to read through the credits carefully a couple of times (where we find both Veber and Sacha Baron Cohen listed as executive producers) to be absolutely sure that "Dinner for Schmucks" wasn't an Apatow project at some remove. I should have known better. Apatow's movies fail (when they do) in a different way than this one does, and I'd like to believe that he'd never work with a script that offered such a bland and miscellaneous collection of gags and situations. (Veber's original screenplay was adapted by David Guion and Michael Handelman.) Now, some of those gags are pretty damn funny, and Carell's performance as Barry, a socially inept IRS employee and mouse-taxidermy enthusiast targeted by rising financial whiz Tim (Paul Rudd) as his guest for the titular make-fun-of-weirdos dinner, is nothing short of magnificent.

It's a character we've seen before, perhaps dozens of times: the isolated womanless nerd-boy, potentially tragic and dangerous. But Carell never relies on the most obvious forms of shtick: Yes, Barry apparently wears the same nylon windbreaker every day, in an indescribable hue between blue and lavender, but his appearance is only slightly dorkier than average, and you'd pass him on the street without a glance. Carell plays him as a strange admixture of shyness, dignity, naiveté and a total lack of appropriate boundaries, so that every time you start to get sweet on Barry, he does something that makes him seem unmanageable and untrustworthy, like going through Tim's possessions or answering IMs not addressed to him that involve panty-clad booty photos.

As is typical of Hollywood comedies, there's lots of great stuff around the margins, including English Amazon Lucy Punch as Darla, the psycho-stalker babe who's sending Tim those IMs, and nice turns from Bruce Greenwood, Ron Livingston and Larry Willmore as Tim's asshole co-workers. Best of all, perhaps, is New Zealand actor Jemaine Clement (of "Flight of the Conchords" and "Eagle vs. Shark") as Kieran, a smoldering, intensely self-involved artist who paints only giant canvases of himself pursuing various sexual and sensual activities. As Barry observes, when face to face with one of Kieran's paintings, "A very attractive man! He can fit a whole octopus into his mouth!"

But all that is basically window dressing around the central relationship between Tim and Barry, who meet when the latter is picking up a dead mouse from the street and the former mows him down with his Porsche. That sets the tone: Tim has promised his beautiful art-dealer girlfriend, Julie (a purely decorative role for Stephanie Szostak), that he won't participate in the dinner-table mockery sessions presided over by Fender (Greenwood), his financial firm's CEO. But he does want the promotion that's being dangled, and he didn't count on fate introducing him to a guy who has constructed diorama reproductions of Leonardo's "Last Supper" and Munch's "Scream," using preserved mice in doll clothing.

In fairness, director Jay Roach (of the "Meet the Parents" and "Austin Powers" series) faces a tough task here: He's got to balance the audience's natural identification with Tim, the putatively normal protagonist, with its instinctive pity for lonely and clueless Barry. (Who reacts to the most hackneyed nostrums as if he's never heard them before. "Everything happens for a reason," he murmurs after Tim, wonderingly. "Did you come up with that?") I'm not giving away too much in telling you that the real subject of "Dinner for Schmucks" is not the eponymous dinner -- which actually occupies only a few minutes of the film -- but the battle over Tim's soul, into which Barry forges like a destroyer-angel with a flaming sword.

Problem is, Tim basically is a dick, and Rudd's earnest efforts to un-dick him only go so far. He's entirely too willing to throw an innocent stranger under the train for the sake of his meaningless career, and he lacks enough interesting texture to serve as the story's moral center. Sure, Barry turns out to be the hero, in a certain sense, but the movie isn't really about him or about Kieran or Darla or Therman (Zach Galifianakis), Barry's bearded IRS colleague and sinister master of mind control -- all of whom are way more compelling.

Of course Tim's sins against Barry are paid back with interest in the form of comic chaos, but it never seems like quite enough pain to make the dude seem likable. Let's face it: Porsche-packing high-finance dudes who rape and kill "distressed assets" just don't rate high on the compassion meter these days. Kieran, the octopus-eating, zebra-fisting artist (I'd better not explain that any further), may be unbelievably pompous, but at least he isn't a soulless corporate fuckwad. When a whole series of Murphy's Law misunderstandings -- culminating, somehow, with Tim on his knees in a fancy restaurant, proposing to nutso Darla with a ring he intended for Julie -- leads Julie to run away to the immense sexual metaphor that is Kieran's goat ranch, I was all like, you go, girl! He's just not that into you! (Kieran, to Barry: "Have you ever lived among a herd of goats, for months at a time, as one of them?" Barry: "No." Kieran, mildly: "That surprises me.")

As that last paragraph suggests, Rudd and Carell have some genuinely insane scenes of involuntary male bonding, but nothing Jim Carrey and Matthew Broderick didn't already cover in the far superior "Cable Guy" (which hovers over this movie like a leering, spectral ancestor) with a lot more disturbing homoerotic energy. The briefest and fairest way to put it is that "Dinner for Schmucks" has more laughs than your average dumb-ass comedy -- it's roughly 2 million percent funnier than the unwatchable Adam Sandler vehicle "Grown Ups," e.g. -- but that by the time we actually reach the dinner table most of them have been expended. As is customary, all the disorderly or anarchistic possibilities of its premise get channeled back toward a message of symbolic pseudo-redemption, which is what Hollywood movies have to deliver at all costs.