Were lives really messier in the "Mad Men" era?

In the N.Y. Times, Katie Roiphe writes that we've lost our taste for sin -- but the facts argue otherwise 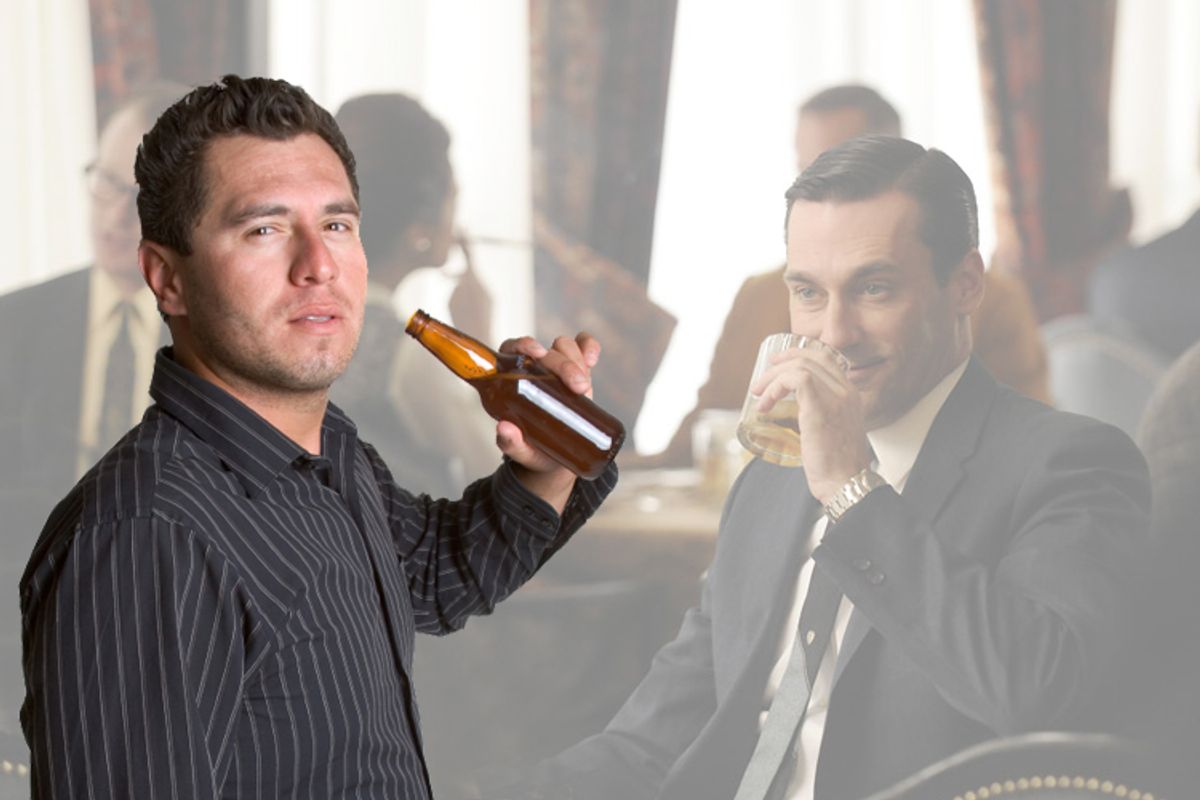 The pristine past beckons, simultaneously so shiny and scrubbed, so rough and primitive. Take, for example, the many ways we love "Mad Men." We envy Don Draper's easy swagger. We swoon at reliving the beginning of the end of our cultural innocence. And as Katie Roiphe explained in the New York Times this weekend, we are helpless when faced with "the allure of messy lives" -- as she puts it, "the pouring of cocktails in the office, by the lighting of cigarettes, by the extramarital carousing."

How much messier was the "Mad Men" era than our own tangled-up, rumpled time? We may smoke fewer cigarettes, but we're likely cheating just as much. A Gallup report Friday shows that the percentage of Americans who consume alcohol is at 67 percent -- not just a 21-year high but higher than it was in the Draper heyday of 1963. We're also holding steady on drug abuse. USA! USA!

Yet when Roiphe writes of "how much better, saner, more sensible our own lives are" and "the tameness of contemporary sins," it sounds like it ought to be correct. We care about the ice caps and our cholesterol levels and attend sexual harassment seminars and recycle now, right? We must be atoning for somebody's crimes. Wasn't it easier somehow when we didn't have to give a crap?

It's true that there's nothing inherently hot, sexy or I-don't-give-a-damn about the question "Does this contain gluten?" And sure, in certain privileged circles you might get the stink eye for not buying organic or shrugging with indifference at the prospect of a Pilates class. But while idealizing the sins of the past -- and conspicuously not mentioning its far more accepted sins of racism, sexism and homophobia -- Roiphe sells our modern taste for vice short.

She writes with astonished awe of Mary McCarthy's boasts about her cocktail consumption and of sleeping with three different men in one 24-hour period. Clearly, Roiphe is unfamiliar with the perfect storm of one-upsmanship that is college students and Twitter updates. (Three words: O. M. G.) It's not just crazy kids, either -- an adult woman is no longer automatically tarred with the strumpet brush if she has multiple partners, and the Gallup numbers show a dead equal percentage of self-professed drinkers in the 35-54 age group as the 18-34 one. Katie Roiphe, maybe you're just partying with the wrong people.

Our forms of vice change -- from martinis at lunch to ordering another bottle of wine at dinner, from quietly swallowing a few Mother's Little Helpers to hitting your friends up for Vicodin, from groping your secretary in the office to arranging a tryst with your high school flame via Facebook. It's clear that today isn't like the past. Most of us don't have ashtrays in our offices and our parents didn't sext each other during their courtships. Yet human nature, at its essence, probably doesn't change. We are neither more virtuous nor less; we just wear cheaper clothes. But we are Americans, dammit. And we are very, very efficient at being naughty, feeling bad about it, and assuming, with all our romantic yearning for what we can't have, that our grandparents had it figured out.