ACLU, CCR seek to have Obama enjoined from killing Awlaki without due process

The first step: Overcoming the government's claimed power to deny U.S. citizens the right to a lawyer 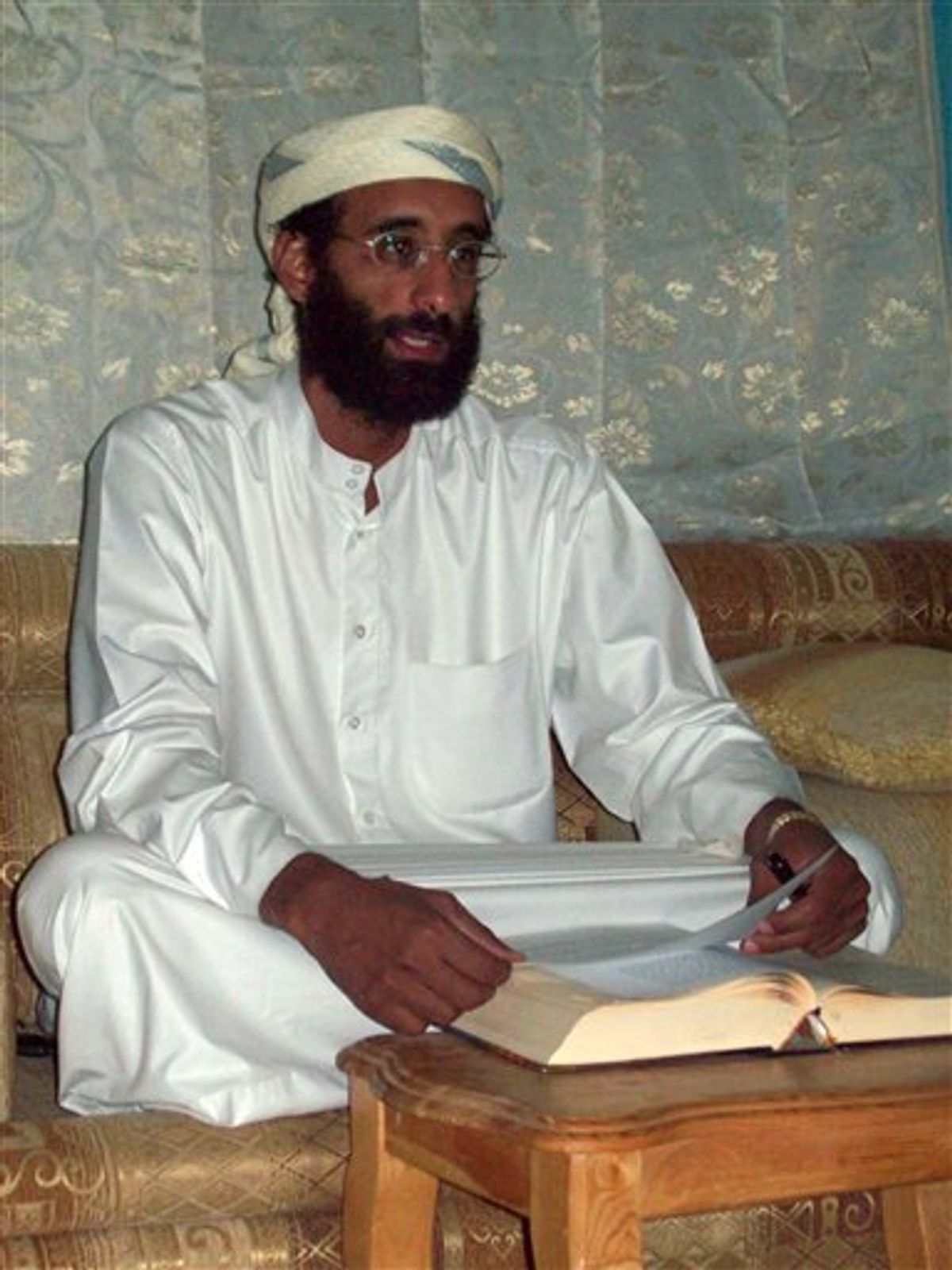 A major legal challenge to one of the Obama administration's most radical assertions of executive power began this morning in a federal courthouse in Washington, DC.  Early last month, the ACLU and the Center for Constitutional Rights were retained by Nasser al-Awlaki, the father of Obama assassination target (and U.S. citizen) Anwar al-Awlaki, to seek a federal court order restraining the Obama administration from killing his son without due process of law.  But then, a significant and extraordinary problem arose:   regulations promulgated several years ago by the Treasury Department prohibit U.S. persons from engaging in any transactions with individuals labeled by the Government as a "Specially Designated Global Terrorist," and those regulations specifically bar lawyers from providing legal services to such individuals without a special "license" from the Treasury Department specifically allowing such representation.

On July 16 -- roughly two weeks after Awlaki's father retained the ACLU and CCR to file suit -- the Treasury Department slapped that label on Awlaki.  That action would have made it a criminal offense for those organizations to file suit on behalf of Awlaki or otherwise provide legal representation to him without express permission from the U.S. Government.  On July 23, the two groups submitted a request for such a license with the Treasury Department, and when doing so, conveyed the extreme time-urgency involved:  namely, that there is an ongoing governmental effort to kill Awlaki and any delay in granting this "license" could cause him to be killed without these claims being heard by a court.  Despite that, the Treasury Department failed even to respond to the request.

Left with no choice, the ACLU and CCR this morning filed a lawsuit on their own behalf against Timothy Geithner and the Treasury Department.  The suit argues that Treasury has no statutory authority under the law it invokes -- The International Emergency Economic Powers Act  -- to bar American lawyers from representing American citizens on an uncompensated basis.  It further argues what ought to be a completely uncontroversial point:  that even if Congress had vested Treasury with this authority, it is blatantly unconstitutional to deny American citizens the right to have a lawyer, and to deny American lawyers the right to represent clients, without first obtaining a permission slip from Executive Branch officials (the Complaint is here).  As the ACLU/CCR Brief puts it:  "The notion that the government can compel a citizen to seek its permission before challenging the constitutionality of its actions in court is wholly foreign to our constitutional system" and "[a]s non-profit organizations dedicated to protecting civil liberties and human rights, Plaintiffs have a First Amendment right to represent clients in litigation consistent with their organizational missions."  The Brief also argues that it is a violation of Separation of Powers to allow the Executive Branch to determine in its sole discretion who can and cannot appear in and have access to a federal court.

Today's lawsuit seeks, on an emergency basis, an Order declaring the Treasury Department's asserted power to be without statutory authority and/or in violation of the U.S. Constitution, and to bar the U.S. Government from imposing any penalties whatsoever (criminal or otherwise) on the ACLU and CCR for providing legal representation to Awlaki.  Assuming the court issues such an order, the next step will be for a lawsuit to be quickly filed on Awlaki's behalf to enjoin his targeted assassination.

It's rather amazing that the Federal Government asserts the right to require U.S. citizens and American lawyers to obtain government permission before entering into an attorney-client relationship -- all because these officials decided on their own, with no process, to call the citizen a "Global Terrorist."  It's difficult to imagine a more blatantly unconstitutional power than that.  What kind of an American would think the Government has the power to decide whether citizens may or may not be represented by lawyers?  Then again, this is an administration that asserts the power to choose American citizens for targeted killings far from any battlefield with no due process of any kind -- and plenty of its supporters are perfectly content with this -- so nothing should really be surprising.

If one really thinks about it, it's an incredible spectacle that a lawsuit is being filed with the aim of having Barack Obama enjoined by a Federal Court from killing an American citizen, far away from any battlefield, without any due process whatsoever.  That such a suit was never filed during the Bush years, but is now necessary under the rule of this Constitutional Scholar almost a decade after the 9/11 attack, speaks volumes about many important facts.

The Awlaki lawsuit, if it can proceed, will likely face serious obstacles, beginning with the same warped tactic which both the Bush and Obama administrations have repeatedly invoked to shield illegal surveillance and torture from judicial scrutiny:  first, refuse to confirm whether such a program exists (notwithstanding public admissions that it does) on the ground such matters are "state secrets," and then, with Kafkaesque perfection, insist that the lawsuit must be dismissed because (thanks to the Government's refusal to acknowledge it) there is no evidence that Awlaki is subject to such an assassination program and thus lacks "standing" to sue.  It's also possible that a federal judge will be highly reluctant to restrain the President from targeting alleged Terrorists, or will view the AUMF as constituting Congressional authorization for the President to kill anyone who is allegedly associated with Al Qaeda no matter where they are found (on the ground that the whole world is a "battlefield"), particularly if they're alleged (without proferred evidence) to be involved in ongoing, imminent Terrorist plots.

But whatever anyone thinks of those issues, it should offend every American that the Government purports to have the power to ban lawyers from representing citizens without its permission, which (as it's doing here) it can withhold without explanation and in its sole discretion.  Does any American want the Government to have that power with respect to citizens:  to bar lawyers, under the threat of criminal prosecution, from representing you if the Government calls you a Terrorist?  That's the power the Obama administration is asserting and, in this case, actively wielding.  A court will now decide if it has the legal authority to do that, and if the court decides it does not, the next step will be a lawsuit brought on behalf of Awlaki contesting Obama's authority to order American citizens killed without any criminal charges or due process.  The Obama administration should be very proud of itself.

UPDATE:  Politico's Josh Gerstein reports that the administration has magnanimously deigned to grant permission to the ACLU and CCR to represent Awlaki's father (and Awlaki's interests).  The primary effects of this decision are two-fold:  it (1) moots the ACLU/CCR's legal challenge to the administration's licensing scheme, thus enabling them to avoid this legal challenge (and thus continue to wield this asserted power until someone else challenges its legality), and (2) ensures that the ACLU and CCR will now promptly file the lawsuit seeking to enjoin the administration from killing Awlaki without criminal charges or any other due process of any kind.  Gerstein is a good reporter and his article on the administration's response to this lawsuit is worth reading.