The enthusiasm gap and you

The right has learned to weather political storms. It's time progressives do the same 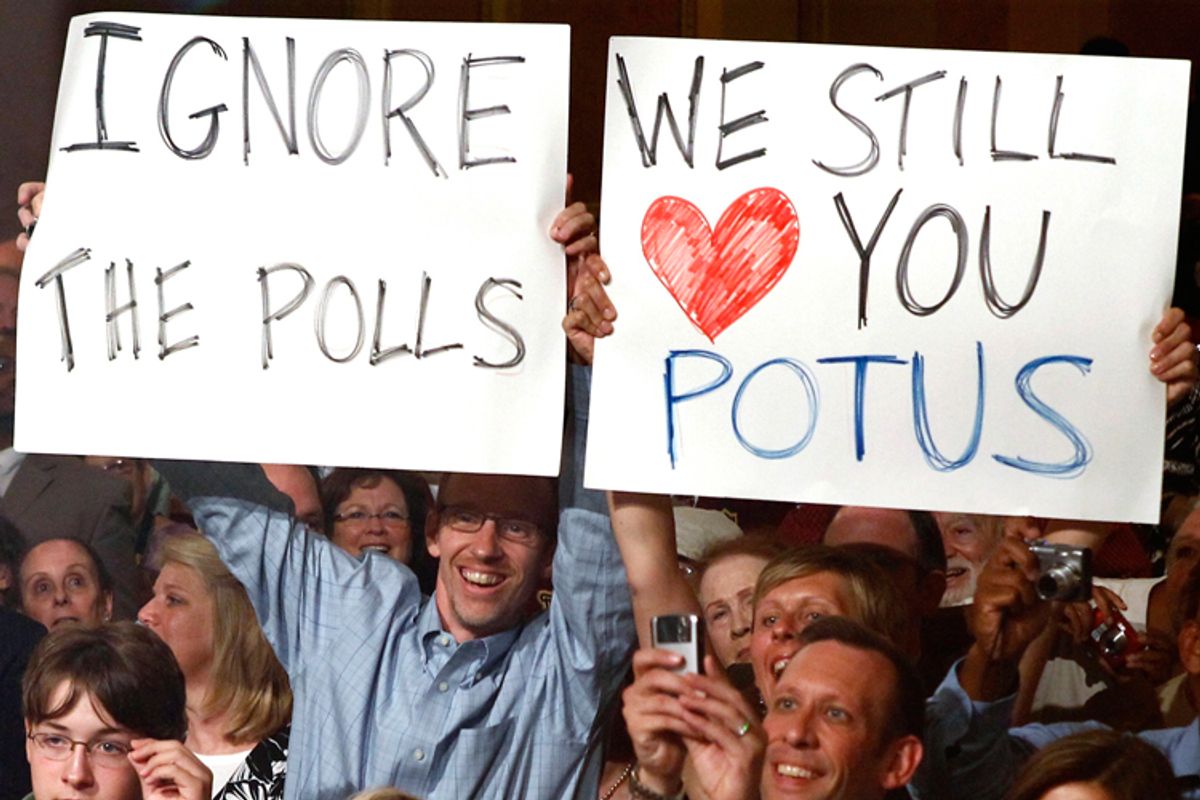 A friend whom I’ll call David raised a ton of money for Democrats in 2008 and now tells me they can go to hell. He’s furious about the no-strings bailout of Wall Street, the absence of a public option in health reform, financial reform that doesn’t cap the size of banks or reinstate the Glass-Steagall wall between investment and commercial banking, and a stimulus that was too small to do much good but big enough to give Republicans a campaign issue. He’s also upset about tens of thousands of additional troops being sent to Afghanistan, a watered-down cap-and-trade bill that’s going nowhere, and no Employee Free Choice Act. David won’t raise a penny this fall and doubts he’ll even vote. "I busted my chops getting them elected, and they caved," he fumes. "They’re all lily-livered wimps, and Obama has the backbone of a worm."

Tea Partiers are getting all the press. But the anger on the left, including much of the Democratic base, is almost as intense.

The pattern isn’t new. I remember a gloomy fall 16 years ago when as secretary of labor I traveled around the country trying to rev up the base for the 1994 midterms. I found anger and disillusionment then, too. Of course, Clinton hadn’t accomplished nearly as much as Obama. In fact, he’d pushed initiatives like NAFTA that infuriated the base.

When Republicans control Congress or the White House, their base can get restless but doesn’t seem to suffer the same disillusionment. Republicans stood by Ronald Reagan in the 1982 midterms and rallied enthusiastically for his reelection in 1984. They were out in force for George H.W. Bush’s 1990 midterm as well as George W. Bush’s in 2002 and his 2004 reelection.

First, the Republican base keeps the heat on after elections so Republican officeholders accomplish what they promise and are less likely to compromise in the first place. The Republican base fueled the Reagan and George W. Bush tax cuts and penalized George H.W. Bush only after he reversed his "read my lips" pledge not to raise taxes.

The Republican base is part of a conservative movement. The Democratic base, by contrast, is a loose coalition that elects a new president and then goes home, expecting the new president to deliver miracles.

When I ask David what he’s done over the last 18 months to push for a more progressive agenda, he says he e-mailed senators in support of a public option and signed a Sierra Club petition for cap-and-trade. "On Afghanistan I even called the White House to tell the president not to send more troops. What else am I supposed to do?"

David thinks of himself as an individual with strong progressive views about specific issues rather than as a member of an ongoing movement with a larger vision of what America should be.

Washington’s network of progressive advocacy groups is just like David. Each has a narrow bandwidth (health, environment, labor, women’s rights) with a national constituency that donates money and sends members of Congress e-mails as requested about particular initiatives.

These groups are staffed by overworked 20-somethings and headed by people who enjoy being minor celebrities at Washington fundraisers and occasional visitors to the White House.

But these groups don’t mobilize people back where they live, and they’re no substitute for a broad progressive movement.

A movement connects the dots across issues and reveals a larger wrong that must be righted.

When it comes to misuse of power, Americans carry two deep-seated fears — of big government taking over and of big business and Wall Street running amok. Both are sometimes justified, but the political response is lopsided. The conservative movement adeptly fits almost every morsel of news to the first fear, giving its members an animating cause: Reduce government.

A progressive movement would focus on the second fear, seeking to protect average working people from the depredations of big business and Wall Street. Given what has occurred in recent years -- from Enron and WorldCom through the devastation brought on by Wall Street, to the price-gouging by health insurers like WellPoint and Big Pharma, right through BP -- there is no absence of dots to be connected.

Average Americans are hurting. But their pain isn’t coming from government. It’s coming from an economy whose benefits are concentrating ever more at the top, whose giant corporations are controlling ever more of our democratic process, and whose costs and risks are becoming ever more burdensome for the middle class and the poor. Public schools, parks and libraries are closing or reducing hours and staff. Median hourly wages are dropping. Unemployment is at levels not seen in decades; long-term joblessness hasn’t been this bad since the 1940s. Social safety nets -- unemployment insurance, Social Security and Medicare -- are endangered.

Yet corporate profits are reaching unprecedented levels, and the richest Americans — CEOs, other top corporate executives, investment bankers and hedge-fund managers — are raking in as much or more than before the Great Recession.

With the election of Barack Obama, many on the left found comfort in the belief that a single man could make transformative change without powerful tailwinds behind him. But that was a pipe dream. No person can do it alone.

I can understand your disillusionment with a president and representatives that seem to bend to the prevailing winds from the right. But if you and David and other progressives wallow in your cynicism we’ll be in much bigger trouble as a nation than we are now.

Here’s what I learned during my years in Washington: Nothing good happens there unless Americans outside Washington are sufficiently mobilized, energized and organized to make sure it gets done.

Be angry, but channel your anger toward constructive change. This fall, work for the reelection of politicians, or for candidates to replace them, who support a genuinely progressive agenda. And lend your hand to the creation and continued sustenance of a powerful progressive movement in America.