A new Brookings poll reveals the harmful effects of our foreign policy, including toward Israel 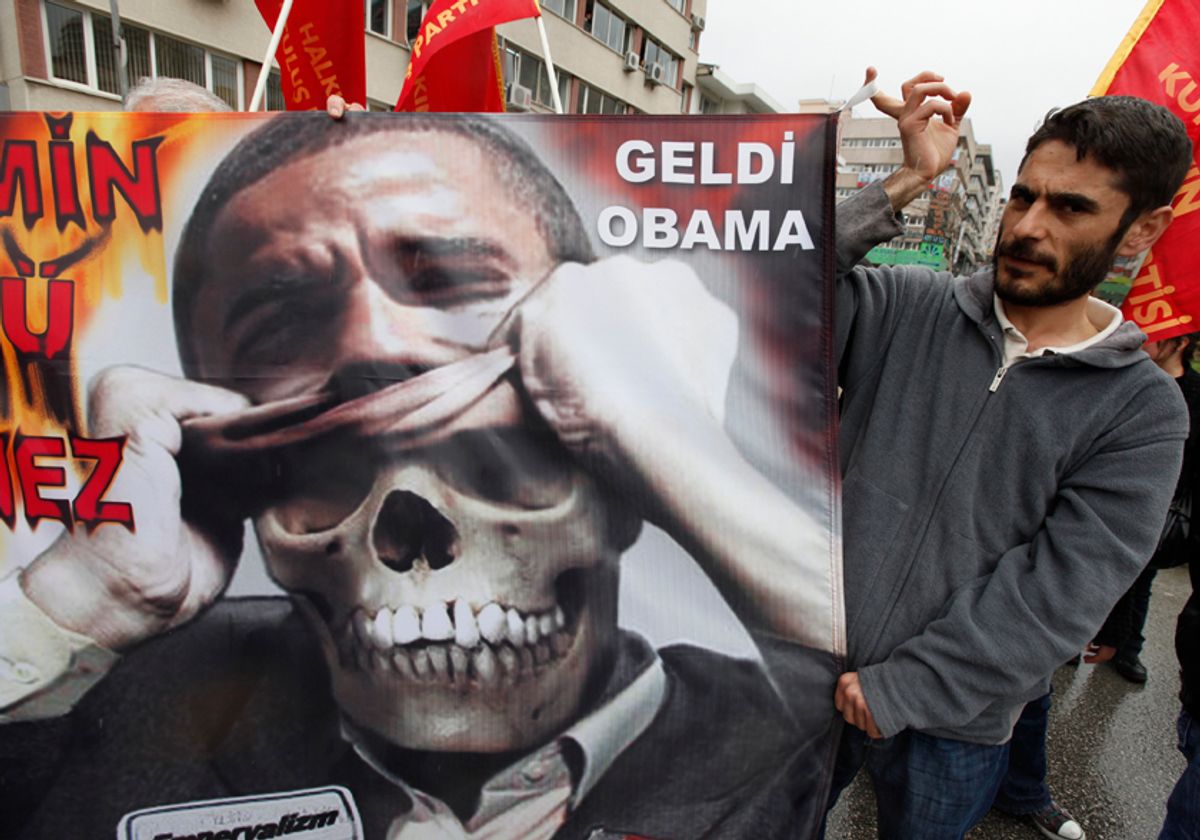 Demonstrators hold an anti-U.S. President Barack Obama poster during protests in downtown Ankara April 6, 2009. Obama is visiting Turkey on the last leg of an eight-day trip that marks his debut as president on the world stage, is a recognition of the secular but predominantly Muslim country's growing clout and Washington's desire for its help to solve confrontations and conflicts from Iran to Afghanistan. REUTERS/Pawel Kopczynski (TURKEY POLITICS CONFLICT) (Â© Pawel Kopczynski / Reuters)
--

In June, a Gallup poll revealed a substantial decline in public opinion in the Muslim world toward both the U.S. and Barack Obama personally, with approval ratings in many key nations collapsing to Bush-era levels.  Now, a new poll from the Saban Center at the Brookings Institution -- in conjunction with the University of Maryland and Zogby -- reveals many of the same developments and, in some cases, even worse ones.  The poll, taken during the first two weeks of July in six predominantly Muslim nations (Egypt, Saudi Arabia, UAE, Morocco, Lebanon and Jordan), found -- in the words of the summary -- "a substantial change in the assessment of President Obama, both as President of the United States and of Obama personally."

Two charts in particular show just how substantial is the collapse in public opinion in the Muslim world in the last year alone: 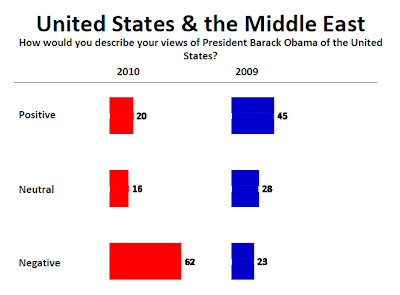 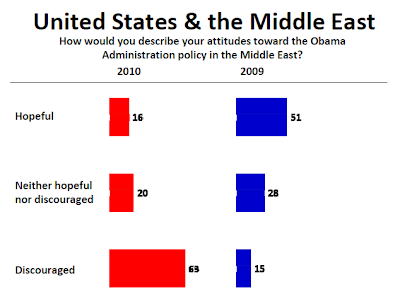 For the question of which world leader they most admire, Turkey Prime Minister Recep Erdgoan was first (with 20%), Venezuelan President Hugo Chavez was second (with 13%), while 12% named Iranian President Mahmoud Amedinajad (Hezbollah leader Hassan Nasrallah and Osama bin Laden were named by 9% and 6%, respectively, while Barack Obama did not make the list).  And when asked their personal view of Obama, a majority (51%) say they both view him unfavorably and are pessimistic about his foreign policy, while 38% say they view him favorably but do not believe "the American system" will allow him positive policy changes.  Only 5% -- 5% -- say they view him favorably and are optimistic about his foreign policy.  When asked which two countries outside of their own region play the most positive role in the Middle East, the U.S. falls at the bottom of the list (with 6%), behind France, Turkey, Saudi Arabia, and five other countries (including Syria).

For all the controversy raised by anyone who claims that our ongoing, steadfast, one-sided support for Israel plays a significant role in generating anti-American sentiment in the Muslim world, this poll leaves no doubt that this is so.  That issue was listed as the primary cause -- far and away -- of negative views toward the Obama administration: 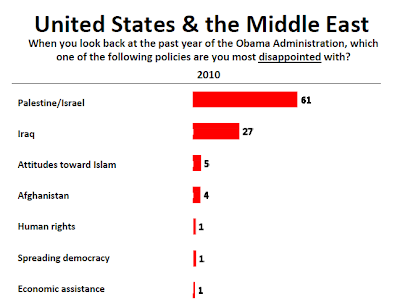 The centrality of American policy toward Israel was reflected over and over in this data.  In response to being asked which two steps the U.S. could take to improve their view, these were the top three answers:  an Israel-Palestine peace agreement (54%), withdrawing from Iraq (45%), and stopping aid to Israel (43%).   When asked which two factors were the most important in driving U.S. policy in the Middle East, the answers were:  protecting Israel (49%), controlling oil (45%), weakening the Muslim world (33%).

There were other revealing responses here.  Contrary to the stereotype that most Muslims and Arabs are devoted to the destruction of Israel regardless of a peace agreement, 86% say they are prepared for peace if Israel returns all 1967 territories, while only 12% say that Arabs should continue to fight Israel even if that happens.  When asked if Iran is developing nuclear technology in order to build a weapon or for peaceful purposes, a clear majority (57-35%) believe it's to build a weapon, but overwhelmingly believe Iran "has the right" to develop nuclear technology and even believe (57-20%) that it would be a net positive for the region if they obtain nuclear weapons.

It goes without saying that the U.S. -- just like any other country -- should not determine its policies based exclusively on what makes it popular in the Muslim world.  But a consensus had arisen in the Foreign Policy Community -- and it was certainly a major plank in the Obama campaign -- that multiple U.S. interests (beginning with our ability to deter Terrorism) would be served by improving how the U.S. is viewed in the Muslim and Arab world.  That objective is plainly failing, despite how receptive (even eager) people in that region were to change their views about the U.S. in the wake of Obama's election.  And whatever else is true, there's no denying that a major impediment to achieving that national objective is our policy toward Israel and especially our tolerance for its unwillingess to make peace the Palestinians.