"Twelve": On the intoxicating badness of Joel Schumacher

The director has built his career on pretentious emptiness. His new quasi-porn prep-school fantasy lives up to it 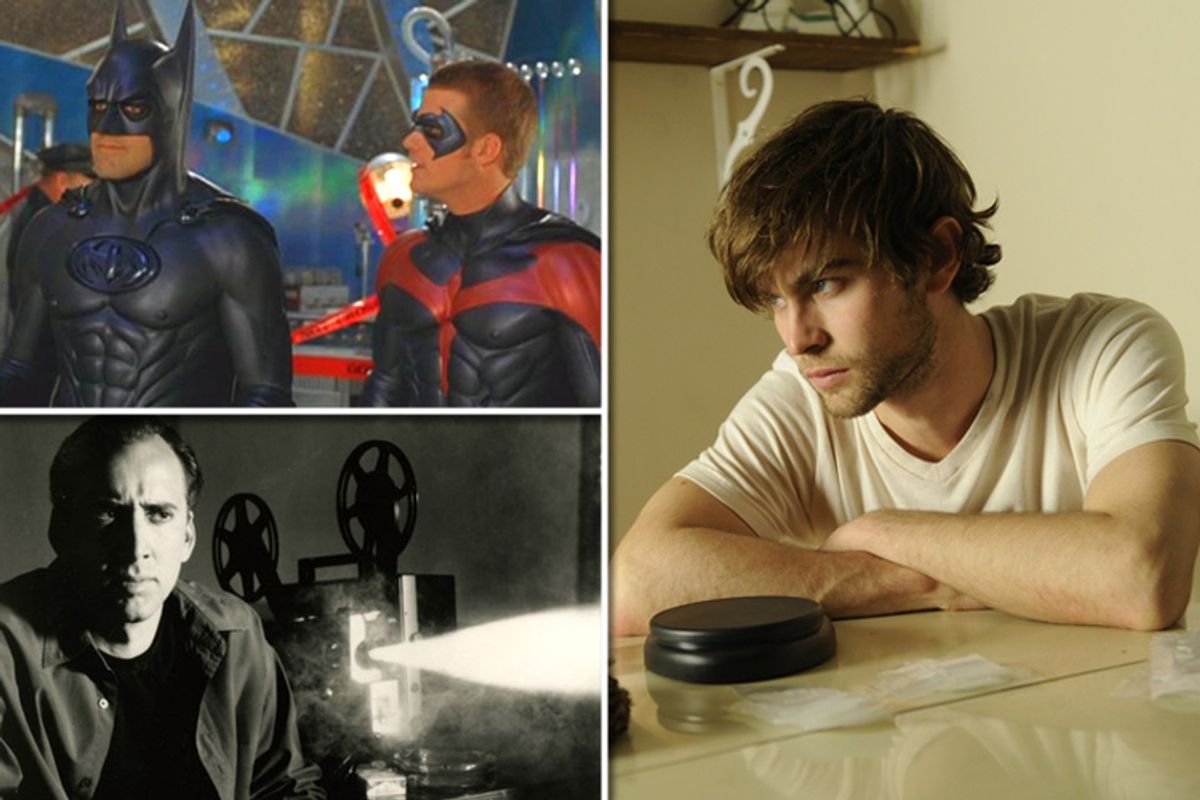 There's nobody in American movies quite like Joel Schumacher, God love him. Allow me to describe a scene in his new film "Twelve," a relatively low-budget independent production that Schumacher himself has described as "'Gossip Girl' on steroids." Our protagonist is a soulful, haunted New York drug dealer called White Mike (played, in fact, by "Gossip Girl's" Chace Crawford), an outsider both in the privileged Upper East Side world of his customers and the Harlem criminal demimonde of his principal supplier (played by Curtis Jackson, aka the rapper 50 Cent). See, I guess his name is Mike, and he's white.

Anyway, after learning that his beloved cousin Charlie has been killed in a drug deal gone wrong -- given what we see in the movies, it's amazing drug deals ever go right -- White Mike walks alone through the deserted late-night streets of Manhattan. Then he finds an open, empty church and goes inside. The images are sleek, stylish and beautifully composed; Schumacher has always had an eye for architecture, as well as for masculine and feminine pulchritude. The scene requires no explanation, and any reasonable director might be content to leave us alone with White Mike's artful three-day stubble and the church and our own thoughts.

But across almost 30 years of hits and flops, $100 million-plus Hollywood pictures and indies shot in three weeks -- from "St. Elmo's Fire" and "The Lost Boys" to "Batman & Robin" to "The Phantom of the Opera," he's a gift that keeps on giving -- Schumacher has never allowed himself to be governed by reason or restraint, or for that matter by good taste. And so it is that White Mike's moment of silent contemplation has to be narrated, by no less impressive an authority than longtime Schumacher pal Kiefer Sutherland, who yada-yada-yadas through the whole movie in the worldly-wise tones of a boho dad giving his young'uns some Straight Talk about Sex, Drugs and Today's Youth. "This is what people do at times like this," Sutherland intones while White Mike gazes blankly at the altar. "It either helps or it doesn't, and so what."

Thank you for telling me exactly what to think about that moment, Joel and Kief. I'm so grateful that you didn't permit me even a second of doubt! Jordan Melamed's screenwriting technique seems to have involved transcribing Nick McDonell's 2002 novel and handing it over to Sutherland. This movie's like an audiobook, accompanied by visuals from a 7-year-old copy of Vogue.

I've been fascinated by Schumacher for years, and based on the oohs and ahs and murmurs I hear from other critics and film buffs when I mention his name, I'm not alone. I'm pretty sure that a review I wrote 11 years ago about "8mm," his ludicrous and offensive odyssey-into-porn thriller starring Nicolas Cage, marks the most pissed-off I've ever gotten at any movie or director. (I can barely remember the movie today, but I wrote that it made me "flat-out depressed about human life.") Yet the combination of ingredients that make Schumacher seem simultaneously compelling and idiotic isn't easy to summarize; he's certainly not the only stylish Hollywood craftsman who makes crappy movies.

As I wrote in 1999, Schumacher has a particular gift for making sleek, portentous, pseudo-profound films that seem socially relevant and of the moment, but that nobody ever wants to watch again. That's an excellent description of "Twelve," which is set in a quasi-pornographic fantasy version of Manhattan prep-school culture and adapted from McDonell's best-seller, published when the author was 18. (Given that McDonell was self-consciously imitating Jay McInerney's "Bright Lights, Big City," I guess that makes his book imitation-imitation-Fitzgerald.) But ladies and gentlemen, I have already said the worst possible shit about Joel Schumacher, and I come here today to praise him, not to bury him.

Schumacher would hold no power over me -- or anybody else, most likely -- if he weren't a gifted, serious and passionate filmmaker who clearly loves what he does. There, I said it! That's what separates him from, say, the Tony Scotts of the Hollywood game, the burned-out hacks who create prepackaged product loaded with overamped style and technical expertise, but who clearly don't give a shit. They're in it for the money or the drugs or the penumbra of glamour and hotness or the poolside babes and expensive brunches at the Beverly Hills Hotel, and once that all dries up they'll piss off to some crumbling European estate to pickle themselves in white Burgundy.

I'm sorry, but Joel Schumacher doesn't roll like that. He'll turn 71 later this month, and if he wanted a chance to retire gracefully and on his own terms, he could have taken it: a few executive-producer gigs, a seat on the boards of a couple of L.A. nonprofits, and so on. His career as a top-line Hollywood director pretty much ended with the 1997 debacle of "Batman & Robin," which was critically derided as an incoherent homoerotic-camp spectacle and, far worse, failed to make money. In the DVD commentary for that muddled morass of a film, Schumacher actually apologized to disappointed Batman fans, and I can't remember a single example of a Hollywood director doing that, ever.

Since then he's been hustling on the margins of the industry, using his connections to actors and producers to generate funding for a series of small and middle-size independent films. He launched Colin Farrell's American film career in "Tigerland," presided over the unlikely pairing of Anthony Hopkins and Chris Rock in "Bad Company," directed Cate Blanchett as murdered Irish journalist Veronica Guerin and tried to turn Jim Carrey into a thriller star with "The Number 23." To a large extent, he's been cashing in on his long-standing reputation as a mensch and a tremendously likable guy. Almost every actor who's ever worked with Schumacher speaks of him highly; the only time I've ever met Julia Roberts (who was in "Flatliners" in 1990), she described him as "total Mr. Genius Man."

You will notice how elegantly I have ducked the question of whether any of these movies is any damn good. Let's give some props for "Tigerland," a Vietnam-era drama that's taut and effective and made with very un-Schumacher-like restraint (perhaps because of its low budget). They're all capably or even elegantly crafted, with some striking shots and loving attention paid to the actors' faces and bodies. Yes, Schumacher is among the relatively small number of out gay directors in American film, and has never been known to resist putting beautiful young men on screen. But I'm not selling coded homophobia here: In "Twelve" and numerous other films, he lavishes at least as much attention on the curves, peaks and valleys of the female form.

No, I'm afraid we're talking about an entire career of pretty, sincere, pretentious and often risible crapola, a peculiar but intoxicating blend of badness that is brewed to near perfection in "Twelve." The title refers to a mysterious but deadly designer drug, some kind of coke-Ecstasy blend that causes aspiring bad-girl Jessica (Emily Meade) to recite the Gettysburg Address to herself while OD'ing in somebody's bathroom. You think I'm kidding, don't you? Meade gets all the good scenes; the next time she takes Twelve, she collapses in her own closet wearing a magazine-ready bra-and-panty set, while all her childhood stuffed animals talk to her in weird, whiny little voices: "Oh no! All gone! All gone!" As we all know from generations of scary, moralistic drug movies, the next step for cute white-girl addicts when the drugs and money are gone is surrendering their virginity to Big Scary Black Guys (for whom 50 Cent serves here as synecdoche).

Meanwhile, drug-dealing White Mike is lying through his teeth to good-girl Molly (Emma Roberts), who loves him despite the fact that he acts massively irritated to be in her presence. "I'm totally writing a report on 'The Plague' by Camus," she tells him. (Metaphor! Allegory! Analogue!) Whatever, baby, I've got to go do something, he replies, before he returns to his romantic lone-wolf existence selling weed to private-school wiggas in a Central Park tunnel. The whole thing culminates in a "Taxi Driver"-style apocalypse, when a 'roided-out military-school runaway shoots up the biggest party of the year, killing not quite enough of the insufferable little creeps that Schumacher can't decide whether he's pitying, mocking or pimping out. And even that won't shut up Kiefer Sutherland.