Marriage and the role of the state 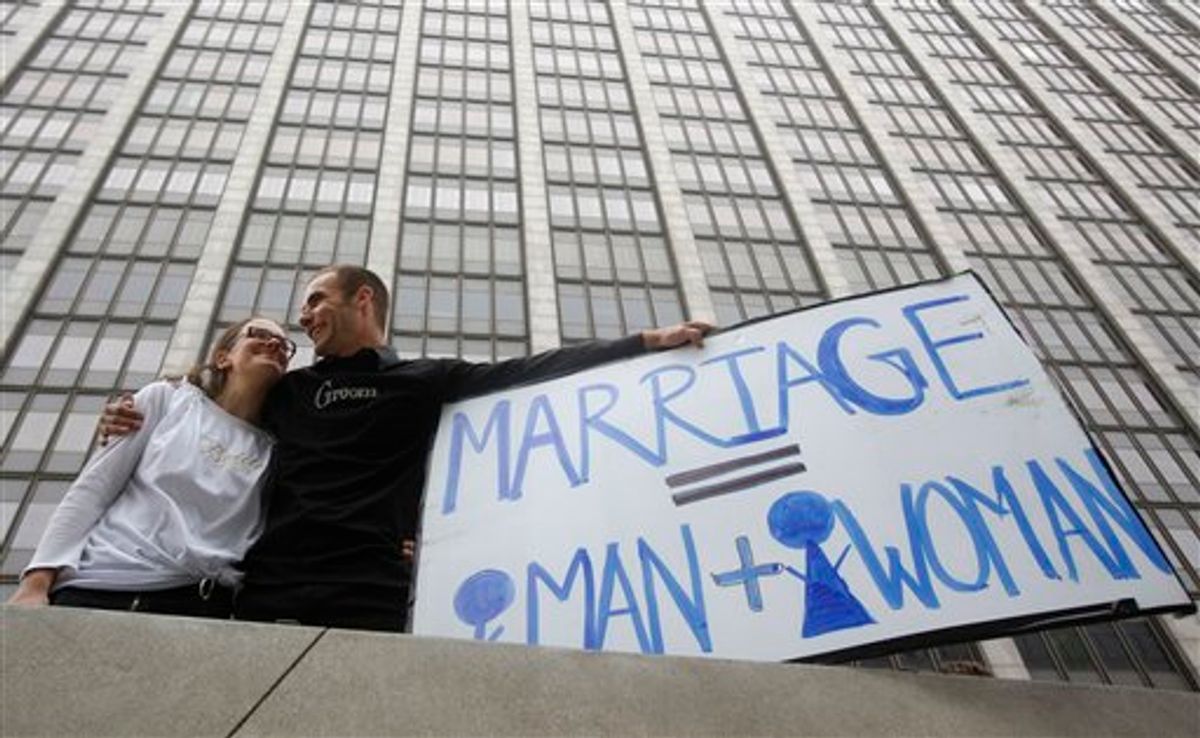 Nadia Chayka, left, and her fiance Luke Otterstad, both proponents of Proposition 8, hold up a sign outside of the Phillip Burton Federal Building in San Francisco, Wednesday, Aug. 4, 2010. The first word on whether California's same-sex marriage ban can survive scrutiny under the U.S. Constitution is expected to come down Wednesday when a federal judge issues his ruling in a landmark case challenging the voter-approved Proposition 8 as an unlawful infringement on the civil rights of gay men and lesbians. Attorneys on both sides have said appeals are certain if Chief U.S. Judge Vaughn Walker does not rule in their favor. (AP Photo/Jeff Chiu) (AP)
--

Ross Douthat uses his New York Times column today to put what he undoubtedly considers to be the most intellectual and humane face on the case against marriage equality.  Without pointing to any concrete or empirical evidence, Douthat insists that lifelong heterosexual monogamy is objectively superior to all other forms of adult relationships:  such arrangements are the "ideal,"  he pronounces.  He argues that equal treatment of same-sex marriages by secular institutions will make it impossible, even as a matter of debate and teaching, to maintain the rightful place of heterosexual monogamy as superior:

The point of this ideal is not that other relationships have no value, or that only nuclear families can rear children successfully. Rather, it's that lifelong heterosexual monogamy at its best can offer something distinctive and remarkable -- a microcosm of civilization, and an organic connection between human generations -- that makes it worthy of distinctive recognition and support. . . . .

If this newer order completely vanquishes the older marital ideal, then gay marriage will become not only acceptable but morally necessary. . . . But if we just accept this shift, we're giving up on one of the great ideas of Western civilization: the celebration of lifelong heterosexual monogamy as a unique and indispensable estate.  That ideal is still worth honoring, and still worth striving to preserve. And preserving it ultimately requires some public acknowledgment that heterosexual unions and gay relationships are different:  similar in emotional commitment, but distinct both in their challenges and their potential fruit.

But based on Judge Walker's logic -- which suggests that any such distinction is bigoted and un-American -- I don't think a society that declares gay marriage to be a fundamental right will be capable of even entertaining this idea.

This argument is radically wrong, and its two principal errors nicely highlight why the case against marriage equality is so misguided.

First, the mere fact that the State does not use the mandates of law to enforce Principle X does not preclude Principle X from being advocated or even prevailing.  Conversely, the fact that the State recognizes the right of an individual to choose to engage in Act Y does not mean Act Y will be accepted as equal.  There are all sorts of things secular law permits which society nonetheless condemns.  Engaging in racist speech is a fundamental right but widely scorned.  The State is constitutionally required to maintain full neutrality with regard to the relative merits of the various religious sects (and with regard to the question of religion v. non-religion), but certain religions are nonetheless widely respected while others -- along with atheism -- are stigmatized and marginalized.  Numerous behaviors which secular law permits -- excessive drinking, adultery, cigarette smoking, inter-faith and inter-racial marriages, homosexual sex -- are viewed negatively by large portions of the population.

The State's official neutrality on the question of marriage does not even theoretically restrict Douthat's freedom -- or that of his ideological and religious comrades -- to convince others of the superiority of heterosexual monogamy.  They're every bit as free today as they were last week to herald all the "unique fruit" which such relationships can alone generate, in order to persuade others to follow that course.  They just can't have the State take their side by officially embracing that view or using the force of law to compel it.

But if the arguments for the objective superiority of heterosexual monogamy are as apparent and compelling as Douthat seems to think, they ought not need the secular thumb pressing on the scale in favor of their view.  Individuals on their own will come to see the rightness of Douthat's views on such matters -- or will be persuaded by the religious institutions and societal mores which teach the same thing -- and, attracted by its "distinctive and remarkable" virtues, will opt for a life of heterosexual monogamy.  Why does Douthat need the State -- secular law -- to help him in this cause?

Second, Douthat is quite confused about what Judge Walker actually ruled.  He did not decree that there are no legitimate moral, theological or spiritual grounds for viewing heterosexual marriage as superior.  That's not what courts do.  Courts don't rule on moral, theological or spiritual questions.  Such matters are the exclusive province of religious institutions, philosophers, communities, parents and individuals' consciences, but not of the State.  That's the crux of this judicial decision.

Thus, one can emphatically embrace every syllable of Judge Walker's ruling while simultaneously insisting on the moral or spiritual superiority of heterosexual marriage.  There would be nothing inconsistent about that.  That's because Judge Walker's ruling is exclusively about the principles of secular law -- the Constitution -- and the legitimate role of the State.  That legitimate role ends where the exclusively moral and religious sphere begins.  That's why we call it "secular law."  Judge Walker's ruling concerns exclusively secular questions and does not even purport to comment upon, let alone resolve, the moral and theological questions which Douthat frets can no longer be "entertained" in a society that affords legal equality to marriage.

The court ruled opposite-sex-marriage-only laws unconstitutional not because it concluded that heterosexual and homosexual marriages are morally equal, but rather, because it's not the place of the State (or of courts) to make such moral determinations.  Moral and theological debates are to be resolved in the private square -- through the kinds of discussions Douthat claims he wants to have -- not by recruiting the State to officially sanction one moral view or the other by using law to restrict moral choices.  Judge Walker, citing decades of clear precedent on that question, made as clear as can be that the issue Douthat seems to think was resolved by his ruling -- namely, whether heterosexual marriages are morally or spiritually superior -- is the exact issue he refused to adjudicate, precisely because those are the issues that courts have no business addressing and the State has no business legislating (emphasis added):

The arguments surrounding Proposition 8 raise a question similar to that addressed in Lawrence [which declared criminal prohibitions on same-sex sodomy to be unconstitutional], when the Court asked whether a majority of citizens could use the power of the state to enforce "profound and deep convictions accepted as ethical and moral principles" through the criminal code. 539 US at 571. The question here is whether California voters can enforce those same principles through regulation of marriage licenses. They cannot. California’s obligation is to treat its citizens equally, not to "mandate [its] own moral code." Id (citing Planned Parenthood of Southeastern Pa v Casey, 505 US 833, 850, (1992)). "[M]oral disapproval, without any other asserted state interest," has never been a rational basis for legislation. Lawrence, 539 US at 582 (O'Connor, J, concurring).

The court did evaluate the question of whether there is convincing evidence demonstrating tangible, empirical benefits to recognizing only heterosexual relationships, and found -- as have the overwhelming bulk of social scientists -- that no such evidence exists.  That's why it's unconstitutional to continue to exclude same-sex couples from the legal institution of marriage:  because none of the empirical or utilitarian justifications legitimately considered by the State can support that exclusion.

But the moral, theological and spiritual questions about marriage are every bit as open and unconstrained as they were before.  Just as is true with a whole host of questions on which the State takes no position, private actors are completely free to venerate some marriages and stigmatize others.  Churches, synagogues and mosques are free -- as they should be -- to sanction only those marriages which their religious dogma recognizes.  Parents are completely free to teach their children that certain marriages are superior and others immoral.  And columnists like Douthat are free to argue that the relationships they want to have are not just best for themselves but are, as an objective matter, morally and theologically superior.

They just can't misuse secular law to institutionalize those views or coerce others who don't accept them into having their legal rights restricted based on them.  But if they're as right as they claim they are, they shouldn't need to coerce others into acceptance through legal discrimination.  Their arguments should prevail on their own.  The fact that they believe they will lose the debate without that legal coercion speaks volumes about how confident they actually are in the rightness and persuasiveness of their views.

UPDATE:  On an unrelated note, I have a new essay on the Surveillance State -- entitled "The Digital Surveillance State: Vast, Secret, and Dangerous" -- for the Cato Institute's Unbound, which can be read here.  Over the next week, several analysts with expertise in this area will be commenting on that essay and engaging in a discussion of the issues it raises, and I'll respond.  I'll post links as that discussion develops.