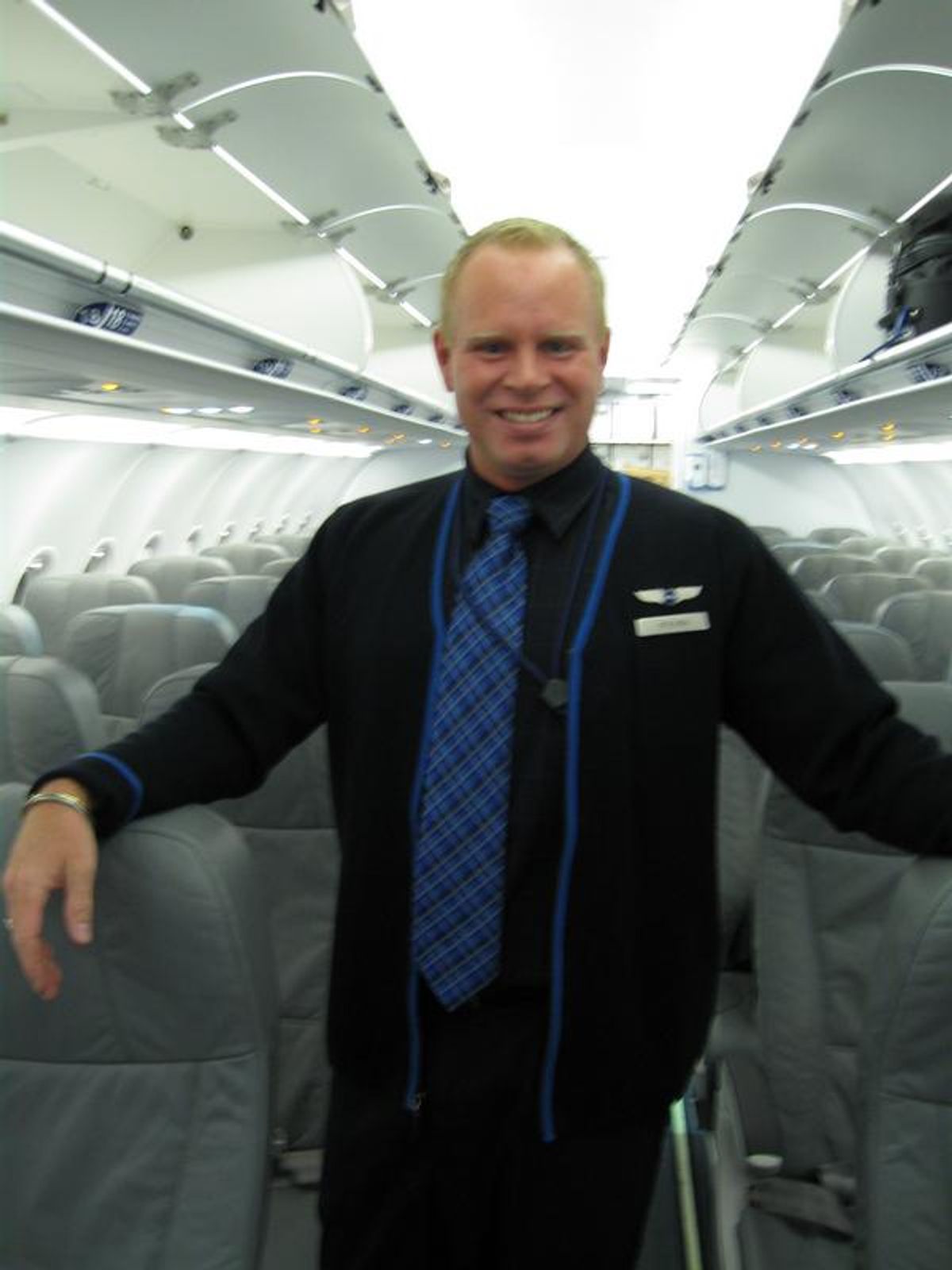 Steven Slater is the Susan Boyle of fed-up employees. On Monday morning, he was just a regular underappreciated working stiff. By evening, he was a viral sensation, the man who stepped up to a microphone and did what so many of us have dreamed of doing -- only bigger, better and more dramatically than we'd probably ever imagined. Oh, he dreamed a dream, all right.

But as you've no doubt read via the news story forwarded round the world, Mr. Slater is no shy British lady with musical aspirations. He was, until very recently, a JetBlue flight attendant. While a flight from Pittsburgh to New York was taxiing on the runway around noon yesterday, as is the custom on planes everywhere, a passenger jumped up to get her belongings from the overhead before the captain had turned off the seat belt sign. Slater asked her to sit down. The passenger refused, and her luggage hit Slater in the head. And when Slater's demand for an apology was allegedly met with a "Fuck you," he didn't respond with a tight-slipped smile and a "Buh bye."

Instead, he got on the plane's public address system, and as the plane pulled up to the gate, said something to the effect of, "To the fucking asshole that told me to fuck off, it’s been a good 28 years!" He then grabbed some beer off the beverage cart, activated the inflatable evacuation slide, slid off the plane, ran to the parking lot and drove home. When officials caught up with him to arrest him for his shenanigans, he was allegedly having sex with his boyfriend. He's charged with criminal mischief, reckless endangerment and trespassing.

This is what we on the Internet like to call EPIC.

Until yesterday, you probably didn't know that this was exactly what the perfect kiss-off would look like. But once you read about it, didn't you think, why yes, come to think of it, it would involve cursing, beer, sex and jumping out of a plane? Of course you did. That's why you posted the story on your Facebook page. That's why within hours, Slater had become a star – a reminder that with one noteworthy action, a person can gain fame faster than it takes JetBlue to get from Pittsburgh to New York. He now has a Facebook fan page with over 10,000 members, a Wikipedia entry and of course, an outcropping of "FREE STEVE SLATER" T-shirts.  As ready as the Internet community always is to tear you down, when we love somebody ballsy enough to take that freak flag and wave the living daylights out of it, we really, really love him. Just ask the Trololo guy.

Slater's actions were assuredly grand and possibly a tad overzealous. As New York Police Commissioner Ray Kelly understatedly told CNN, "It's a strange way to quit, let's put it that way. I don't think he'll be able to come back." Yet his hall of fame-worthy exit cut right to the heart of a sentiment felt by anyone who's ever had to take crap from customers for a living, toiled in quiet desperation for an impersonal corporation, or looked at a paycheck and thought, "Are you kidding me?" Or as Drew Carey once said, "You hate your job? There's a support group for that. It's called everybody, and they meet at the bar." If you have never had a job that you fantasized elaborately about storming out on, you just haven't been working long enough. Suffice to say the news of Slater's exit made me wish I could get in a time machine and go back to the last day of my year in nonprofit. And that the museum I worked for had an emergency chute.

The economy sucks. The unemployment rate hovers at nearly 10 percent. We're losing our health insurance, and our homes are being repossessed. That Slater has also, according to reports, been caring for his dying mother gives his desperate act a deeper resonance. Who quits his job at a moment like this? A guy we love, apparently. Nutty as his action may have been, it was a "We're not gonna take it" win for working stiffs everywhere, a reminder that we actually do have a choice in life, somewhere in between sucking it up and opening fire in a post office. What he did was crazy, but half the people you know are kvetching about how they "can't quit" their terrible, soul-sucking jobs -- and what's sane about that?

When the sword of Damocles is hanging over your head, it is a bad time to be reckless. That's exactly what Steve Slater was. He threw it all away. He jumped. Few would have the moxie to leap after him, but look how many there turned out to be on the ground, waiting to cheer for his landing. For everyone who's ever been abused in the line of duty, for everyone who's ever been a cog in the machine, score one against helplessness.