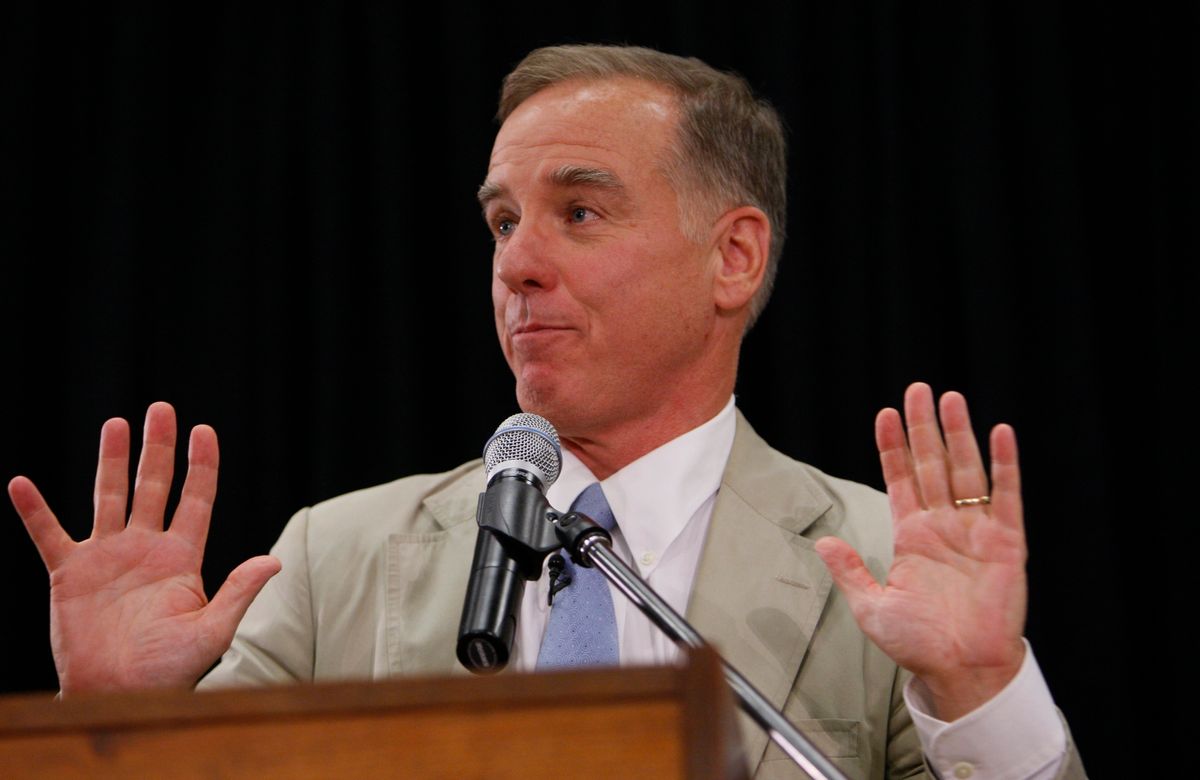 Certain things are disappointing and surprising even for the most hardened cynics.  Hearing Howard Dean -- the former liberal standard-bearer -- join Newt Gingrich and Sarah Palin by saying the following is definitely one of them:

Making this more repellent is that he doesn't even have the "I-want-to-get-re-elected" excuse.  Today, former Reagan Solicitor General Ted Olson -- whose wife, Barbara Olson, was killed on 9/11 -- said he saw no reason for Park51 to move.  And Peter Beinart, expediting his ongoing transformation from TNR Seriousness Guardian into shrill liberal blogger, today called on Democrats to -- as he put it -- "Grow a Pair" by standing up to this increasingly toxic campaign.  Yet here comes Howard "I'm-from-the-Democratic-wing-of-the-Democratic Party" Dean, advocating that the vicinity of Ground Zero be turned into a Muslim-free zone because some people don't want Muslims near it.  It's episodes like this which breed increasing levels of pervasive disgust and even indifference about electoral outcomes.

UPDATE: After hearing Dean say this, I wrote on Twitter:  "Please: nobody ask Russ Feingold what he thinks of Park51 - really couldn't stomach hearing him say it should move - difficult race or not."  Thanks to amites for pointing out that Feingold -- in an extremely difficult re-election battle in a purple state -- has already spoken out in favor of the community center remaining right where it is.  Just as impressively, Alexi Giannoulias -- the Democratic nominee for Senate in Illinois (for Obama's old seat) who is also in a very close race -- came out and strongly supported Park51 as well.  So those two stand in stark and impressive contrast to Dean.  And see this Ann Tenales cartoon suggesting a new campaign ad for Harry Reid.

UPDATE II: For those raising the issue that the tape of Dean was first released by Breitbart, and thus wondering whether it was distorted through editing, I emailed the Dean-affiliated Democracy for America, and received this reply from DFA official Charles Chamberlain:  "It's not edited.  It's real."  And just to bolster that:  the website of WABC-77, the radio station on which Dean made these comments, has the same exact clip of Dean's comments on its own site.  So clearly the clip is authentic and unedited.

UPDATE III: The New York Times, in June, detailed that proposed mosques in multiple locales in New York City -- far away from the Sacred, Hallowed Space of Ground Zero -- are provoking similar backlashes.  Two weeks ago, Yahoo News reported on similar incidents from around the country.  These are the real sentiments at the heart of this controversy.

UPDATE IV:  Last night, I asked Dean to record a podcast interview with me about his position.  Thus far, he has submitted a written response to what I wrote here for publication on Salon, which is re-printed below in full.  For me, several questions remain about his rationale, as well as some new ones raised by this statement, and it's still my hope that he'll be willing to answer some of those questions and have a discussion about his views:

First of all I am not going to back off. The reaction did surprise me because most of the negative reaction had to do with defending the constitutional rights of the builders of the center. Of course I never attacked those rights, I explicitly supported them as the President also did this week. Nor did I side with the Islamophobic rhetoric of Newt, Palin et al. There are a great many people in this debate talking past each other as is often the case these days.

Here is my case. First, no one who understands the American Constitution can reasonably doubt the right of the builders to build. Secondly, the building site is very close to the site of a violent tragedy that seared the soul of every American including Muslim Americans. Thirdly, the builders of the proposed Islamic Center say they want to help heal the nation and there is a preponderance of evidence that that is true, based not least on the fact that the last administration viewed the leadership of this group as a. pro American bridge to the Muslim world.

Fourth, there are many Americans, about 65 or 70 percent, including many family members of the victims, who have very strong emotional resistance to building on this site. Some of them may have other feelings such as hate, fear, etc. but the vast majority of these people are not right wing hate mongers.

My argument is simple. This Center may be intended as a bridge or a healing gesture but it will not be perceived that way unless a dialogue with a real attempt to understand each other happens. That means the builders have to be willing to go beyond what is their right and be willing to talk about feelings whether the feelings are "justified" or not. No doubt the Republic will survive if this center is built on its current site or not. But I think this is a missed opportunity to try to have an open discussion about why this is a big deal because it is a big deal to a lot of Americans who are not just right wing politicians pushing the hate button again. I think those people need to be heard respectfully whether they are right or whether they are wrong.

This has nothing to do with the right to build and unlike same sex marriage or the civil rights movement it is not about equal protection under the law. The rights of the builders are not in dispute. This is about ending the poisonous atmosphere engendered by fear and hate, and in order to do that there has to be genuine listening, hearing and willingness to compromise on both sides I personally believe that there are other possible solutions that could result from such a process and that a genuine exploration of those possibilities is something we ought to try.

The mere fact that a majority of Americans hold a particular view -- including perfectly nice and well-meaning people -- doesn't mean the view is free from bigotry and irrational fear.  Does anyone doubt that?  The history of most nations is suffused with episodes whereby perfectly well-intentioned people ingested -- unwittingly or otherwise -- irrational and even horrific positions about a whole host of matters.  As for why opposition to Park 51 is necessarily and by definition grounded in classic bigotry -- i.e., all Muslims bear responsibility for the 9/11 attack -- see my NYT contribution here.  For how that bigotry expresses itself in practice among project opponents, see here and here.  The central question raised by this controversy is the same one raised by countless similar controversies throughout American history:  whether the irrational fears and prejudices of the majority should be honored and validated or emphatically confronted.   That question, and several other issues raised by Dean's response, are what I hope to discuss with him.

UPDATE V:  I'll have a video interview posted with Dean later this afternoon.