A Wu-Tang rapper is the latest target at a violent music festival. Is it time to crack down on juggalo culture? 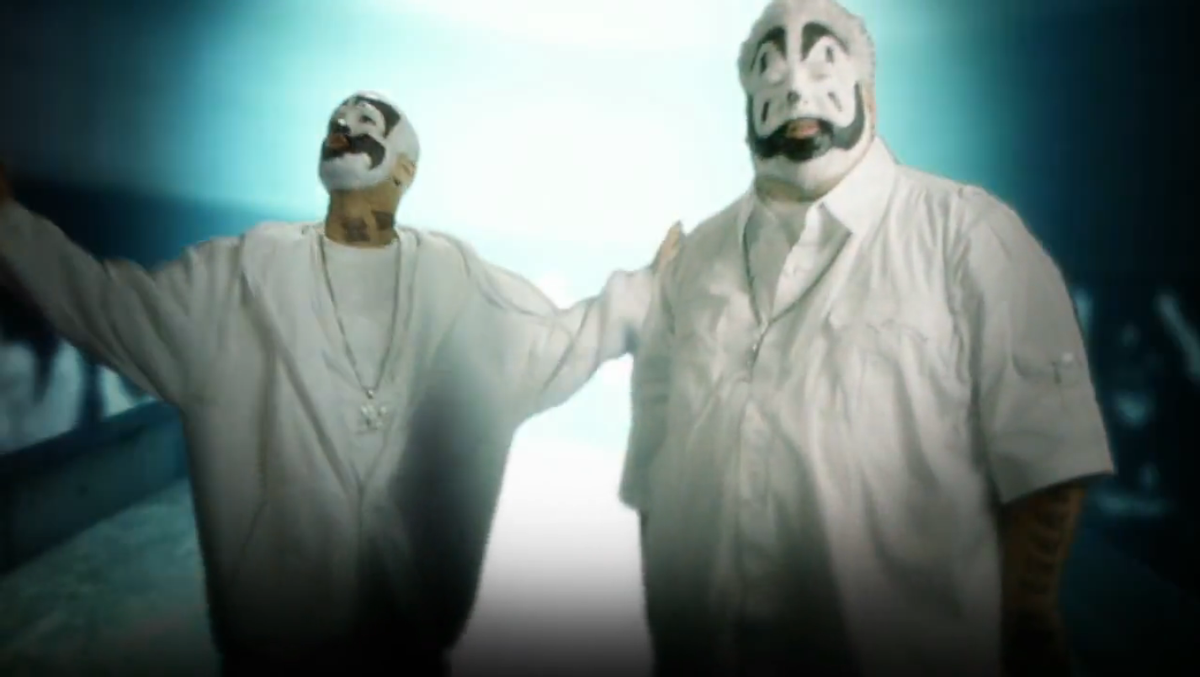 Still from the music video for "Miracles" by Insane Clown Posse.
--

As if we didn't have enough menaces this summer, between Russian smog and the return of "Jersey Shore." Now there is a new threat to our safety and well-being: juggalos. This week both Tila Tequila and Method Man were the victims of juggalo attacks. Your children could be next.

What is a juggalo, you ask? How will I recognize one in the wild, and how should I approach it in its habitat? Juggalos, unlike rabid prehistoric fish, are land creatures. The short version is that they're fans of Insane Clown Posse.  But they're so much more. They are distinguished by their fondness for scary clown makeup, mayhem, substituting dollar signs for the letter S and the comedy stylings of Gallagher. And once a year, they harness their juggalo power and come together for what is known ominously as The Gathering. If you think things can get ugly at Walmart, you do not want to be in Cave-In-Rock, Ill., in mid-August.

It was there on Sunday, at The Gathering, that Tila Tequila, a woman you'd think would be welcomed with open arms by devotees of all things insane, was pelted with rocks, bottles and feces while attempting to perform. After a catching a rock to the face and getting bloodied up, Tequila retreated to a nearby trailer, which the juggalos promptly besieged, smashing its windows. Juggalos – they're like poo-flinging monkeys, but dumber and angrier. Then Wu-Tang Clan's Method Man was similarly nailed in the face by what appears to have been a beer can during his own Sunday performance. Like the badass he is, he carried on, bleeding, saying, "Start the music -- we're continuing the show."

Tila Tequila has firmly stated her intent to sue the festival's organizers. And Method Man told TMZ he's also going to sue the "motherfuckers" from The Gathering, noting, "It's not OK ... I don't condone throwing things at the talent while they're performing."

We all enjoy a defiantly out-of-control subculture, and it wouldn't be summer without people cutting loose at music festivals. And the oft-parodied infomercials for The Gatherings remain the funniest thing since Sarah Palin's twitter stream. But we don't quite get the bloggers who blame Tequila for not doing "due diligence" before her appearance, who imply that there's any correlation between appearing topless onstage and getting hit with rocks. Does anybody really need it spelled out that having a good time and being, as Tequila described the crowd, "very angry and violent" are actually mutually exclusive? It's simple – people who aren't jackasses don't throw things at other people's heads.  That should be enough to satisfy anyone's criteria for a civilization. But it took the added attack on Method Man to really give the juggalo threat level story its gravitas, along with local news reports of lax security, multiple arrests and the stabbing of one concert-goer.

We rarely find ourselves simpatico with historically litigious people who name themselves after alcoholic beverages. And we know we cannot judge all juggalos by their most aggressively violent members. As one told reporters this week, "It's about showing love." But when Tequila says, "I'm hoping this will be the last juggalos Gathering that they will ever have," we're on her team. Because it's clear that juggalos are one species that needs to thin its herd.

2011 Gathering Of The Juggalos Infomercial