I went to Mongolia wanting to taste the sacred animal, but there's a lesson beyond flavor in forbidden food 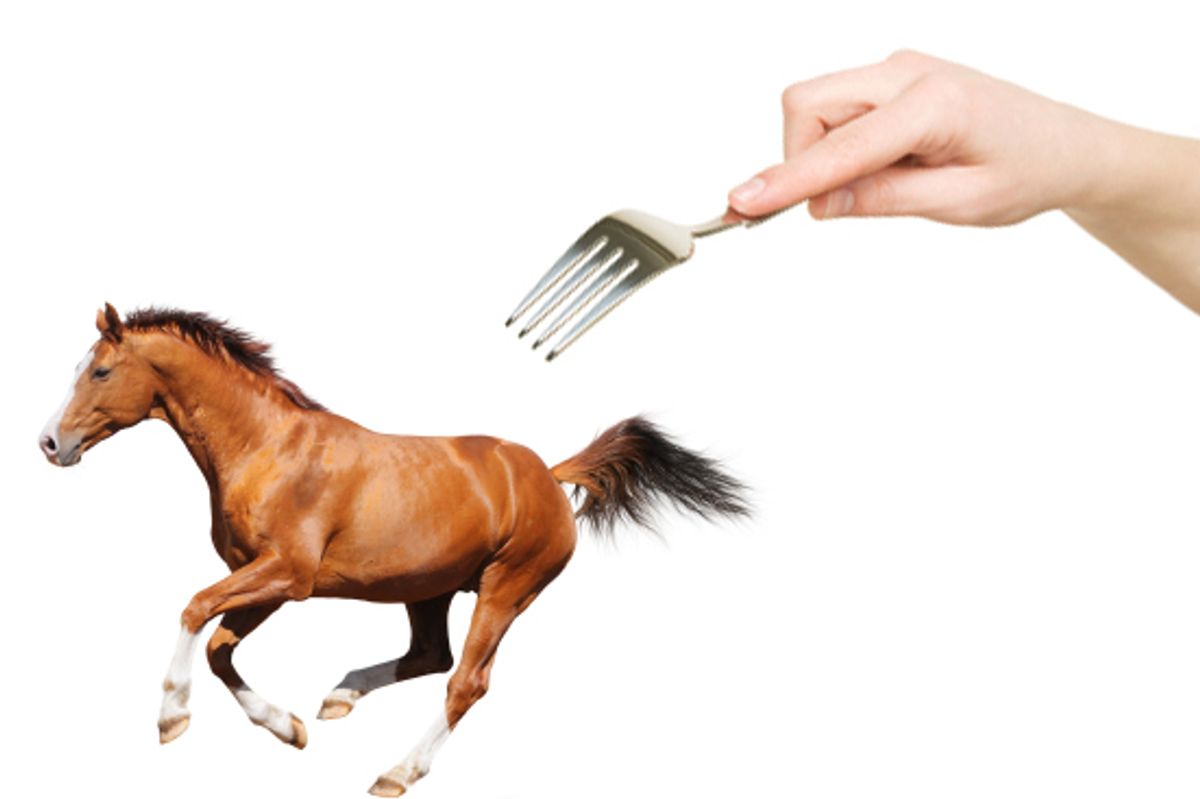 As a child, the closest I got to horses was a coin-operated mustang in the grocery store. I was mostly indifferent to them, boyhood cowboy phase excepted, until a history professor described the Mongol armies that dominated Asia. Horsemen with a string of mounts pressed at unprecedented speed across impossible territory. They struck quickly, baiting opposing armies into outrunning their own supply lines and their discipline. When the Mongols moved separate from their own herds, they rotated horses to keep them fresh, opened veins to drink horse blood, and culled the weakest for food.

The Mongols were brutal and pragmatic and mobile. I was self-indulgent and listless, but now suddenly obsessed with their stories. When I arrived in Mongolia as a Peace Corps volunteer two years later, it was with a rucksack full of romance, too little long underwear, and a hunger. Mongolians ate horses, and I wanted to join them. I wanted to ingest some history and culture. Perhaps I did a little too much reading.

While horse is commonly eaten in Europe and revered in Japan, most Americans cannot stomach the idea that anyone would eat them. Our aversion to horse meat is so strong that Congress found time even around its quagmires to consider a bipartisan Prevention of Equine Cruelty Act, even though horse slaughter is already basically illegal since the USDA does not grant inspections to equine slaughterhouses. In March, the Missouri House of Representatives, invoking the otherwise unassailable priority of job creation, considered a bill that would make it possible to slaughter horses in Missouri. The effort failed.

Still, despite my hope to eat one there, horses do not want for respect in Mongolia. To see that firsthand, travel in winter on a bus, a Russian relic overfilled with sacks of meat and passengers in cocoons of wool, cashmere, nylon and faux fur. The temperature, vibration and cargo are absolutely numbing. On every trip, however, a child's voice calls out. Passengers awake from a collective stupor and rub portholes in the ice-coated windows, point, appraise and come alive. Nothing -- not five welcome minutes to piss into the snow, not a sacred tree streaming with prayer flags, not even the relief of the capital's central heating and serviceable vodka -- is as dependably remarkable to these travelers as a herd of potbellied horses on the plains.

Horses are sacred animals to the nomadic herders and a powerful symbol for all Mongolians. Like the bald eagle, their well-worn image adorns living rooms, clothing, music videos and the biceps of the patriotic. Unlike the eagle, this animal has a daily role in the life and livelihood of the country. And still people eat them. In a country sustained by mounted herders, horses bring home the bacon and are sometimes themselves the bacon.

I spent my first three months in a small town called Khongor, built around wheat fields and a flour mill. With the withdrawal of Russian support, the mill failed and the town struggled on by providing vegetables, meat and a truck stop to an industrial city 15 kilometers to the north. It was, perhaps, an unlikely place to go looking for the culinary artifacts of empire.

Out of place as I was, I was well taken care of, usually in ways I couldn't have asked for. Otgonjargal, the woman who first taught me how to eat and speak Mongolian, usually couldn't figure out what I was asking for either. Each night I pointed at a piece of meat and asked, "What is this?"

"Oh," I would say, looking for words in the bare linguistic cupboard of my mind, "but which animal?"

Not horse. I never failed to look a little downcast before remembering myself and saying a word I thought meant delicious. Later, I found a way to explain myself: "My people eat sheep. We eat goats, sometimes. We eat cows. We eat fish. Chickens too. But we don't eat horse. Do you eat horse?"

Otgonjargal responded to this juvenile broadside with characteristic generosity by bringing me, first, a tin of sardines. I tried to explain that my people didn't eat fish like this, not usually. But also that these were delicious. And thank you. But we usually ate them larger. "Like this," and I held up my hand, even made it swim a little. The next day, Otgonjargal's husband, Chinzorig, brought home a plastic bag filled with palm-size fish from the river.

"Now," they said, "show us how Americans eat fish." I had never cleaned a fish before, never chopped off a head or removed scales. I had only watched them arrive at a table sitting proudly on a bed of vegetables or battered and swimming in tartar sauce -- so I battered and fried enough fish for each of us to have two mostly edible nuggets.

"Our people don't eat fish," they said. "That was ... new." They waited until I retreated to my room, somewhat proud of my role as cultural ambassador, and Otgonjargal made noodles with mutton. I gave up on dietary suggestions and, to get my expectations in line with my experience, on eating horse.

Near the end of the summer, a block of room-temperature meat swaddled in shopping bags materialized on the counter. It shrunk with each meal. For days, I watched it sit just out of the sun and far out of the barely working refrigerator. I noticed a dark yellow strip of fat and an almost disturbingly dark tone of red. I was quietly concerned, but I was even more culturally gung-ho and, besides, no one else was concerned.

At the beginning of a meal near the end of the meat, Otgonjargal's children delivered my bowl and pointed at it: "Aduu!" At my confused look, they galloped around the living room, around me and my over-full bowl. "Aduu," they shouted again. Like "cows" become "beef," in the Mongolian language, horse became something different when made many and made into food. It also became something quite different than I had expected. The meat in the kitchen hasn't been discolored at all -- it was just that horse was a different color.

The community where I ate my horse didn't look like the camp of history's greatest conquerors, whatever that was supposed to look like. The horses didn't look like the graceful televised thoroughbreds that had always been my image of horses. Mongolian horses were built like bikers – thick and shaggy. After the best reading a major library could provide, it took a summer's worth of dinners to start treating horses the same way I treated most other animals I have regular contact with: less like a symbol, more like food.

When I moved to a provincial center in the Gobi and got more than halfway to fluency, my culinary education accelerated. I shared a yard with the family of two teachers, Oyunchimeg and Erkhembaatar, and I lived in the ger, or yurt, in which they had spent much of their lives together. I earned my meals by glacially peeling potatoes and trying Oyunchimeg's patience while she did most of the cooking.

She explained, over boiling pots of mutton, that her people did indeed eat horse, but not if they could help it. "Mongolians eat horses," she said. "We, however, don't really eat them. And if we do, it's only in winter. Horse with garlic is good for colds. The broth from boiled horse is bad for your stomach. It just does, and it just is."

I pressed for concrete reasons, asking why they make these choices and distinctions, in every one of the limited ways I could. Oyunchimeg finally looked impatient. "Because," she said, "we do."

Because is rarely a good enough reason for my people to eat horse. Like dogs and cats, horses are so packed with meaning and with our fondness for them that their flesh becomes polluted the moment we turn it into fillets. They occupy pride of place in the sparsely populated pantheon of exceptional animals. No other working animal joins them, and the logic of inclusion is inconsistent. Plenty of pork lovers, after all, also loved Wilbur in "Charlotte's Web." No cowboy ever sang ballads about loyal sheep and we don’t teach chickens to nuzzle our faces. Horses in America are, even to avid meat-eaters and city folks, more than the sum of their otherwise edible parts. For all my frustration with Oyunchimeg, the reasons we don’t eat horse -- big eyes, sleekness, perceived loyalty, and the national myth of how they helped us "win" the West -- can be reduced to because we don't.

I should have predicted the response when I wrote a matter-of-fact e-mail back home that, in Mongolia, we ate horse. An ex-girlfriend I hadn't heard from in months wrote to forbid me from horse-eating. My sister-in-law Claire, whose family raises horses in Missouri, suggested -- perhaps in jest -- that she would stop speaking to me if I kept it up. Some relatives sent me the e-mail equivalent of retching.

A curious or depraved few wrote to ask what horse tastes like. I didn't really have an answer. It hadn't been particularly relevant while surrounded by horse-eaters. I know that we ate horse minced in steamed dumplings or fried in meat pies, sliced into bowls of flour noodles and boiled on the bone. I knew it made a serviceable fajita when my parents sent Old El Paso taco packets. I knew the murderous color of red and the Post-it yellow bands of fat. I knew how we ate it and I knew when.

How horse tastes doesn't have much to do with taste buds or personal preference, especially when the creature in question is old and rangy. Horse doesn't taste good or bad, as I remember, any more than foods other than bacon and marzipan taste universally good or bad. As with most of what I've eaten outside the States, the flavor has less to do with smell and taste than it does with memory and people.

As a university student, before I'd ever seen a dead horse that wasn't falling from under John Wayne, horse flesh tasted like getting out of the Midwest and becoming someone with a square jaw who told the best stories in the bar. On a Mongolian bus, horse was the realization that matters of taste are often matters of collective taste. With Otgonjargal, it was the sensation of coming-of-age again, a baptism by mincemeat. With Oyunchimeg, horse tasted like becoming family over a bowl of poorly peeled potatoes. At no point, however, do I remember tasting horse flesh itself. I didn't need to before I left Mongolia, and I'm not sure I want to now.