I've always believed it would make me closer to my food, but slaughtering a chicken only leaves me with questions 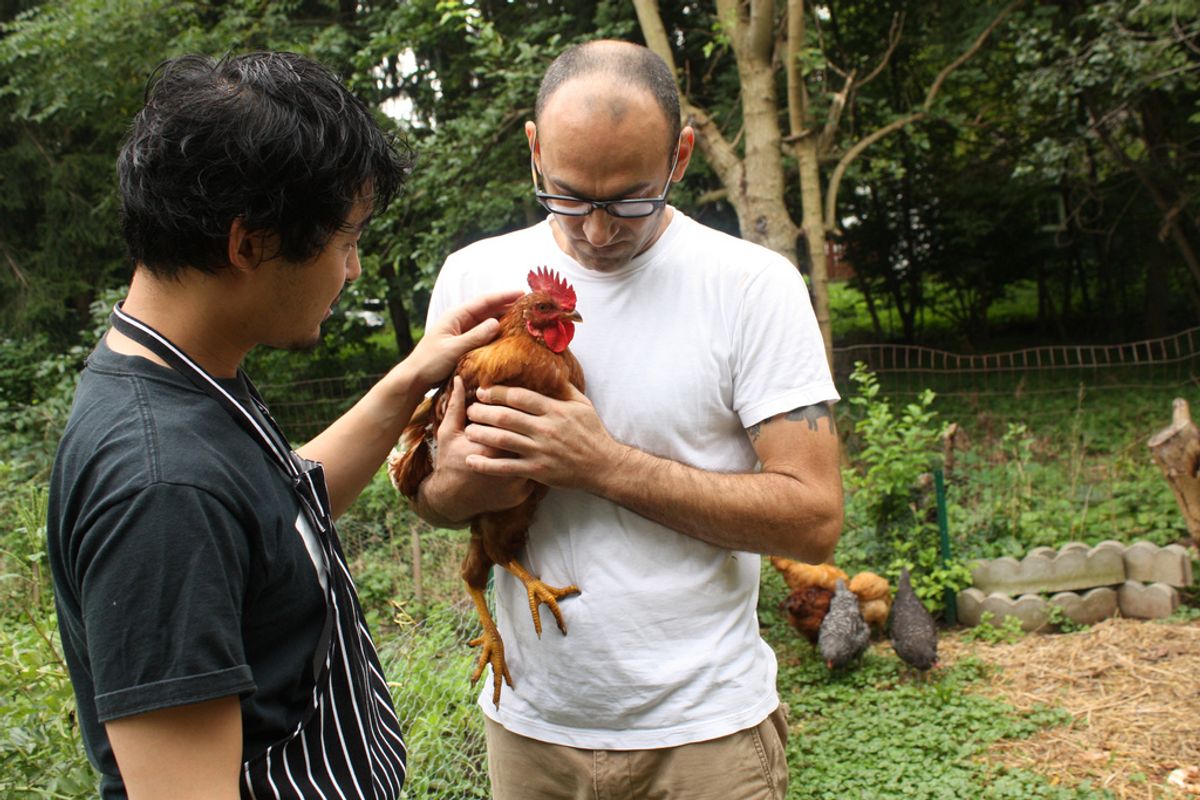 After a tour of his garden, where tomatoes were bombing from the vines and melons lolled about like a bowling alley after close, my friend Shelby showed me his chickens. He opened the door to the coop, which he built in anticipation of this first batch of chicks. "Hey babes," he cooed to them. "Hey, buddies," he said. He pointed them out, introducing them by their variety. Then we strolled over to his wood-burning oven, which he also built -- with dirt he dug from his yard -- but we weren't done talking about the chickens. "One of them turned out to be a rooster," he said. "I can't have roosters; the neighbors get upset. I was thinking we'd kill it and cook it. Maybe Saturday," he said.

I think the feeling I felt at that moment could be called excitement. For years, since the day I found myself hurling invective toward people freaked out by fish served with their heads on, I've been saying that meat eaters should have to kill their dinner at least once. "Meat is animals. You can love eating it, but you're not allowed to forget that," I said, with no small amount of self-righteousness. Of course, I'd never done it myself, and I've eaten many times my body weight in meat since then. So I looked forward to absolving myself of hypocrisy and, I figured, who better to walk me though it than Shelby? He grew up on a farm. He has a tattoo of pigs and chickens circling his arm, and he has the thick, powerful hands of a man who seems comfortable with any kind of labor. He's the kind of friend who makes you stand up a little straighter because you don't want to feel like a wussy around him.

I also have to admit that, in a world where we romanticize farmers and food artisans, there was a certain fantasy to it. Shelby calls his little suburban Michigan home "The Homestead." It's a joke, but one morning, when I woke up on the living room floor to the sound of his roommate Daniel hand-milling flour from wheat to make bread in an oven heated by a fire he tended, the jokiness of it started to melt away. This was some  country-type living, and I happily threw myself into the fantasy. Out in the country, the circle of life is bare before you. Out in the country, you're supposed to kill your own dinner. It's supposed to make you closer to your food, right? This is what they mean by knowing where your food comes from.

All week long, as I attended baking camp, I marveled at the yeasts and bacteria that we harness for bread, at the aliveness of bread. On the way in and out of the house, though, I'd take a peek over at the chickens, where it was hard not to notice aliveness. I watched their big, clawed feet feel and stalk the ground as gracefully as their sudden, jerky heads were awkward. I watched them scratch in the garden and peck at the greens. They love the greens.

Saturday. We wake up, have toast from Daniel's bread and apricots he'd canned. Shelby sets a big pot of water to boil outside and, over coffee, I can't help noticing a book on the shelf called "Basic Country Skills."

We let the chickens out of the coop. "Hey, babes," Shelby says, "Hey, buddies." We follow them into the garden in bare feet. As Shelby calmly approaches the young rooster, angling toward him, the other chickens skirt out of the way. "They know, he knows," I'm thinking. The bird shifts away from Shelby and comes toward me. I feel the dirt under my toes, such an odd feeling for my city feet, and I feel myself tense up in fear of the chicken's claws. I hunch over, make a halfhearted lunge for him, and miss.

Will I look into the bird's eye? I have a quick moment of thanks when he flops to the side, his eye trained away from mine. I stare at his neck. I don't see the hatchet come down, but, as if in reverse, I see the blade moving away from the board. In its place, where it was, suddenly there are different colors -- red, white, yellow. The hatchet came down again, and then the body jolts. I see blood on my arm, on my feet, and I hold on to the bird, knowing that it would buck and kick. I hold him, and Shelby drops the hatchet and comes over to put his hands on, too, and we stay with him, thinking this is the only thing we can do. The feet stretch, and I can see the chicken's neck straining, as if searching. Shelby goes back to stroking the feathers, in gentle gestures. "It's OK, it's OK, it's OK," he keeps saying to the dead bird. My feet and arm are suddenly covered in tiny flies taking in the blood. "Circle of life," I mutter. "It's OK, it's OK," Shelby keeps saying to himself.

We dip the chicken in the boiling water and pluck his feathers. Shelby guts him, and I take him inside to wash him out afterward. In the business, they call this "processing," a blandly generic term you have to imagine is intentional. The process took hold, and, at some undefined point, I was dealing with this chicken as if it was like all other chickens. I was just a cook, and this chicken was just food. As I washed the bird, though, I put my hand inside the carcass. It was warm. I've never felt raw chicken so warm.

"How should we cook it?" Shelby came in to ask. "I'd say high heat, in the wood oven, crisp the skin. It wouldn't take long." I washed the blood off my arm and my feet, and, coagulated, it came off slowly, leaving the confusingly good smell of fresh chicken on my hands. Shelby consulted "Basic Country Skills" to see how long we should let the meat rest. Forty-eight hours, it said, far longer than the time between now and dinner. I asked him why he needed to read it in the book. "I haven't done this since I was 9," he said. Then, "I could feel he was scared, when I held him," he said. He paused. "I almost cried out there. I couldn't have done it without you," he said.

We roasted the chicken along with a feast of garden vegetables, and we sat down to dinner with friends. The smell was exquisite, the juices pooled in the plate were stunningly good, and the meat was tough from our failure to let it rest properly. Is this what it means to know where your food comes from? To know why your chicken is chewy? I had trouble taking my second bite, putting the crook of its leg up to my lips, and yet, again, I recognized the superb flavor when I did, like there were two parts of my brain working in different rooms and not talking to one another.

I finished eating my piece of chicken leg and felt obligated to have a taste of breast. For some reason, it felt less weird to tear off a bite of meat with my hands; I suppose not putting the bird to my face gives a bit of distance. Is this what it means to be closer to your food?

I have to admit that I am left only with questions. Will I think differently of chicken in the supermarket after this? Or will this just be a memory, something to write about? Will it become easier if I do it again, and would that mean that I'd be in greater harmony with the "circle of life" or just that I'd become inured to killing animals? Did we honor or debase this bird any more or less than what Tyson does? I believe so -- it had a good life, ran freely, was slaughtered by people who, for better or worse, feel badly about it. Cold comfort for the bird.

Yesterday, in a hurry at work and thinking about writing this story, I reflexively got in line at a food cart for lunch. It came my turn, and without giving it a thought, I ordered. "Chicken and rice, extra sauce," I said.