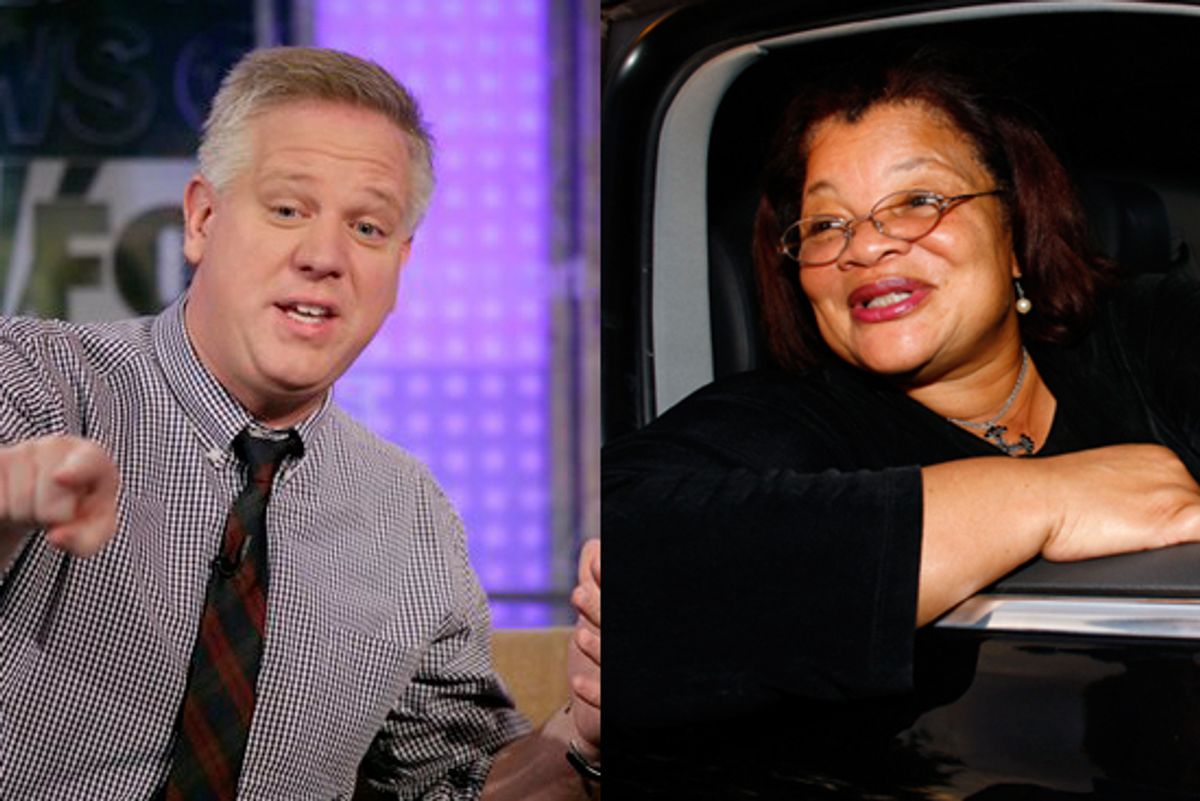 Glenn Beck is smitten with Alveda King, a fundamentalist Christian and outspoken foe of gay rights and abortion -- and niece of slain civil rights leader Martin Luther King Jr. She will speak Saturday at Beck’s "Restoring Honor" rally on the Mall, which falls on the 47th anniversary of her late uncle's March on Washington for Jobs and Freedom.

Recent appearances on Beck's Fox News show have catapulted King into the conservative limelight, and she has compared Tea Partiers to civil rights marchers, "speaking out with courage and conviction peacefully for what is right." Her statements have garnered her increasing press attention, and she was even included by Keith Olbermann in a recent "Worst Persons in the World" segment for calling gay marriage "genocide."

Beck has taken pains to claim that Saturday's rally, which will also feature Sarah Palin, will be "non-political." This has allowed him to enlist a nonprofit organization, the Special Operations Warrior Foundation, to underwrite the estimated $1 million cost for the event in exchange for receiving all of the profits.

King certainly seems at home in the conservative movement. She is currently the director of African-American Outreach at Priests for Life, had a stint at the Alexis de Tocqueville Institution, and like many on the right, she cites "natural law" as the basis for her political philosophy.

She is also the co-founder of an organization called King for America. As of Thursday, the group's website was inactive and could only be viewed through a cached version, which listed 22 different nationwide programs and activities. King insisted the organization was still active but said it only had one staff member. A day later, the site was back online, complete with an antiabortion blog post.

King’s academic credentials have also raised eyebrows. She is regularly referred to as "Dr. Alveda King" in promotional material, although her doctorate is an honorary one, bestowed by St. Anselm College, a Catholic school in Manchester, N.H. And she could not recall why she was awarded the honorary degree.

"I guess for my stand on the support of marriage, and family, and education, and life."

Beck is at the forefront of a movement to appropriate Martin Luther King's legacy, just decades after many conservatives opposed a national holiday honoring the social justice advocate. That he can claim Alveda King, a woman who has found a home on the right after years of personal wandering and political about-faces, as an ally can't hurt.

In the late 1970s, King was elected to the Georgia state Legislature, where she served two terms as a Democrat -- a period she is not eager to recount.

"I’m not involved in politics anymore," she insisted. "Make sure you note that."

By the mid-1980s, King left office and began work on a romance novel, "Arab Heart." A few years later, she filed a lawsuit against Paramount Pictures, charging that Eddie Murphy stole her plot for his 1988 comedy "Coming to America."

"I gave the manuscript to be read by Eddie Murphy, and he decided to take that and cut me out," she said. "But that’s what happens in the industry."

In 1994, the 11th Circuit Court of Appeals ruled against King, finding that her self-described "historical tale of romance and adventure" did not have "substantial similarity" to the film, noting that the former was a "serious work with few lighter overtones, whereas 'Coming to America' is a quintessential light romantic comedy."

King went on to write a self-help book for black women ("I Don’t Want Your Man, I Want My Own") and also "Sons of Thunder: The King Family Legacy," which Amazon cryptically describes as "researched and authenticated through the documentation of priests, rabbis and scholars," allowing readers to "acquire a broader comprehension of God's love toward the African appearance and name identity: an acknowledgement that many religious leaders and intellectuals have shrewdly kept from the public."

King, who until recently went by Alveda Beal King, has political commitments born of a difficult personal life. She frequently describes the formative role played by her divorces and two abortions, holding tight to her family name even as she became estranged from family.

In 1994, she released a letter condemning Coretta Scott King’s support for abortion and gay rights, saying it would bring "curses on your house and your people ... cursing, vexation, rebuke in all that you put your hand to, sickness will come to you and your house, your bloodline will be cut off."

Lynn Cothren, Coretta Scott King’s openly gay special assistant for 23 years, recalls Alveda’s vocal opposition to a hospice for AIDS patients in her neighborhood. Once, says Cothren, Alveda brought religious tracts to the King Center and encouraged him to repent.

"Mrs. King dealt with it," said Cothren, "and she didn’t pass out any more tracts."

Alveda is dismissive of her aunt, who died in 2006, saying, "I've got his DNA. She doesn't, she didn't ... Therefore I know something about him. I'm made out of the same stuff."

Civil rights activists will protest this Saturday’s rally, and reject Alveda’s claim to her uncle’s legacy.

Loretta J. Ross, a black reproductive rights activist with the Atlanta organization SisterSong, says conservatives have recruited King "to be a front, to be a face ... It’s a culture war wedge, to try to use gay rights and abortion as a way to build rifts in the black community."

"King was not only not a Republican, he was well to the left of the Democratic Party of the 1960s," he said. "One could make a very strong case that King thought of himself as a democratic socialist. It’s also well-documented that Dr. King was a strong supporter of Planned Parenthood, and it’s well-documented that one of his five or six closest advisers, Bayard Rustin, was gay."

Alveda seems to relish the fight, and she certainly doesn’t share her uncle’s fervent opposition to violence. Asked about the wars in Iraq and Afghanistan, King said that conflicts are biblically ordained.

"The book I go by says there will be wars and rumors of wars," she said. "It’s just the season. It’s where we are right now."