The Burger King-eating boys from Brazil

We interrupt this American recession with an important news break: The rest of the world is moving on and up 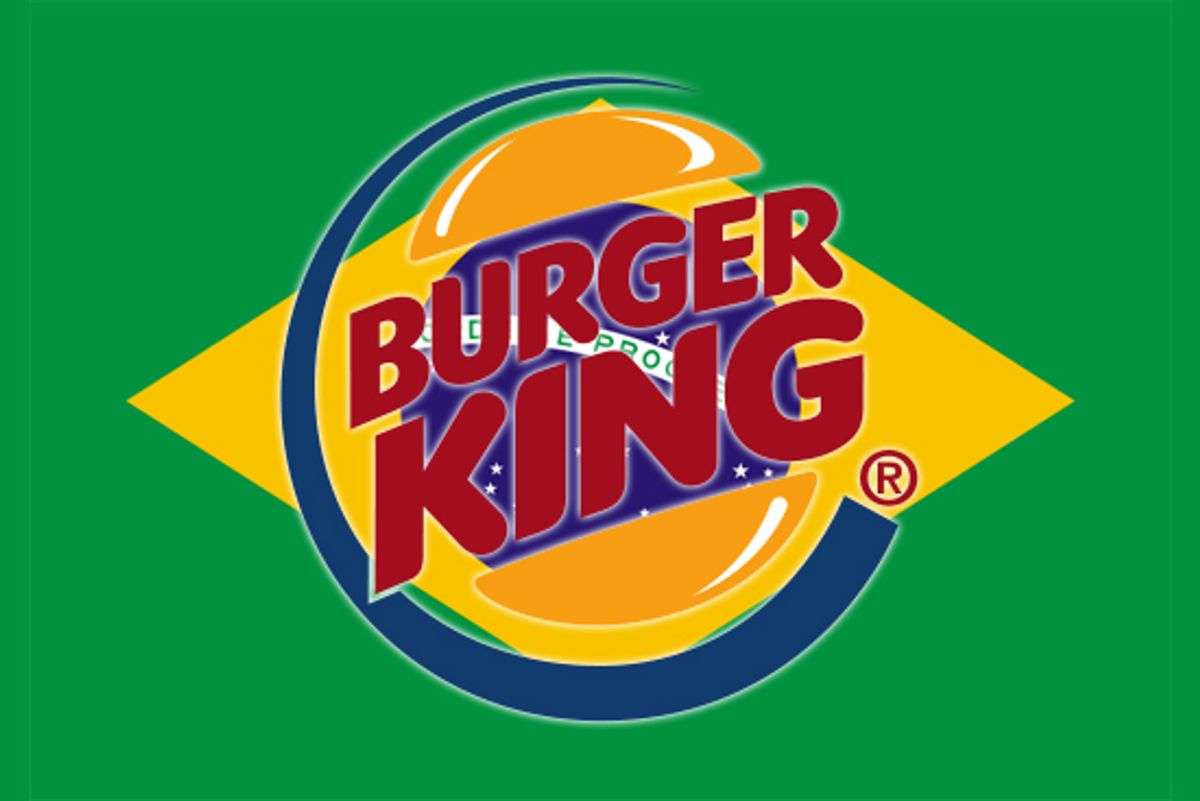 So a New York-based private equity group backed by Brazilian capital is buying Burger King for a tidy $3.3 billion. And China's state-owned chemical giant, Sinochem, is reportedly looking for ways to block an Australian mining giant's bid for Canada's Potash Corp -- one of the world's biggest fertilizer giants. Meanwhile, today's news out of India is that the subcontinental economy grew at a blistering 8.8 percent (annualized) pace in the second quarter of 2010.

Brazil, China, and India. I name-checked those three countries in my post yesterday on Malthus and the Discovery Channel gunman as likely sources of the human capital that might help us innovate our way through the challenges of the 21st century. But while skimming the headlines today, I realized that even I, ostensibly a writer about globalization, had not been paying enough attention to what's been going on in the "emerging" world.

There's an excuse -- the financial crisis, Obama's election, and the ensuing intense political struggle over domestic policy in the United States turned my attention inwards. These were all gripping, important stories and I don't apologize for becoming obsessed with them. (And to be frank, Elizabeth Warren tends to generate a lot more traffic than anything I write about India, Brazil, or even China). But there's a price to be paid for turning inward -- and that's running the risk of missing the really big story.

The giant financial sinkhole that sucked the U.S. and Europe into its maw turned out to be a mere speed bump for the brawniest new players on the global economic scence. Brazil's economy grew at the fastest rate in 14 years in the first quarter of 2010. China rebounded so fast that it's a wonder the entire nation doesn't have whiplash. And India seems barely to have noticed. These are not trivial trends. Together, China, Brazil, and India have a combined population of 2.7 billion -- nearly half the world's population. If their economies continue to grow at comparable rates in the decades ahead, the entire course of human history will shift profoundly.

It's dangerous to generalize too much. China's state-dominated enterprises pursuing strategic goals meant to advance the entire nation's interest embody a different strain of capitalism than Brazil's international agenda. China wants a piece of Potash Corp. because it wants to ensure access to cheap fertilizer for food production. Brazil's movers and shakers, on the other hand, don't appear to care whether they are buying hamburgers or beer. They're just looking for profit. Meanwhile, India, much more quietly, is sneaking up on everyone, it's growth healthily driven far more by domestic demand than is China's.

You would be hard put to find a point in history, at least since the economic explosion of Western Europe prior to and during the Industrial Revolution, in which the global economy featured such a multi-polar set of independent economic power centers. And yet in the U.S., more than ever, we have become wholly consumed by our own internal cultural flashpoints and brain-dead political squabbles. As the rest of the world is busy growing up, we're steering ourselves straight into a backwater.

I was trying to figure out a grand narrative to tie this all together, and then discovered that Jacob Zuma, the president of South Africa, did a pretty nice job of it in a speech he gave in Beijing, just last week.

The entire speech is meaty and worth reading. Here are a couple of excerpts:

That the world is changing is not in dispute.

It is an irrefutable fact that economic power is in a process of shifting from North to South, and West to East. China for example is once again assuming its historic position as a major power in the world.

The objective reality is that today no major decision on issues of global governance, such as reforms of the United Nations, the WTO Doha Development Rounds, Climate Change, global financial issues related to G20, rebalancing the world economy and addressing the global financial crisis -- can be taken without the consent of the developing world.

... [I]n the middle of the financial crisis, the developing world grew four and a half percent faster than the OECD member countries.

The developing world was told that if it did not Westernize and change its political systems to mirror those of the West, they could forget about achieving economic growth and development.

Now we are asking what we could learn from other political systems and cultures?

... The OECD Development Center estimates that, measured in terms of real domestic buying power, the developing countries will have a larger share of the world economy than the OECD countries by the year 2012.

By the year 2030, developing countries will have fifty-seven percent of the world economy, and the current OECD members, forty-three percent.

If we measure the contribution of different parts of the world to economic growth, the developing world contributed almost seventy percent of world growth last decade, measured in terms of domestic buying power.

It is plain for all to see that we are living through one of those historic moments in world economic history.