"Going the Distance": Can Drew Barrymore save the rom-com?

In "Going the Distance," the star shines as a loud, ballsy broad opposite real-life beau Justin Long 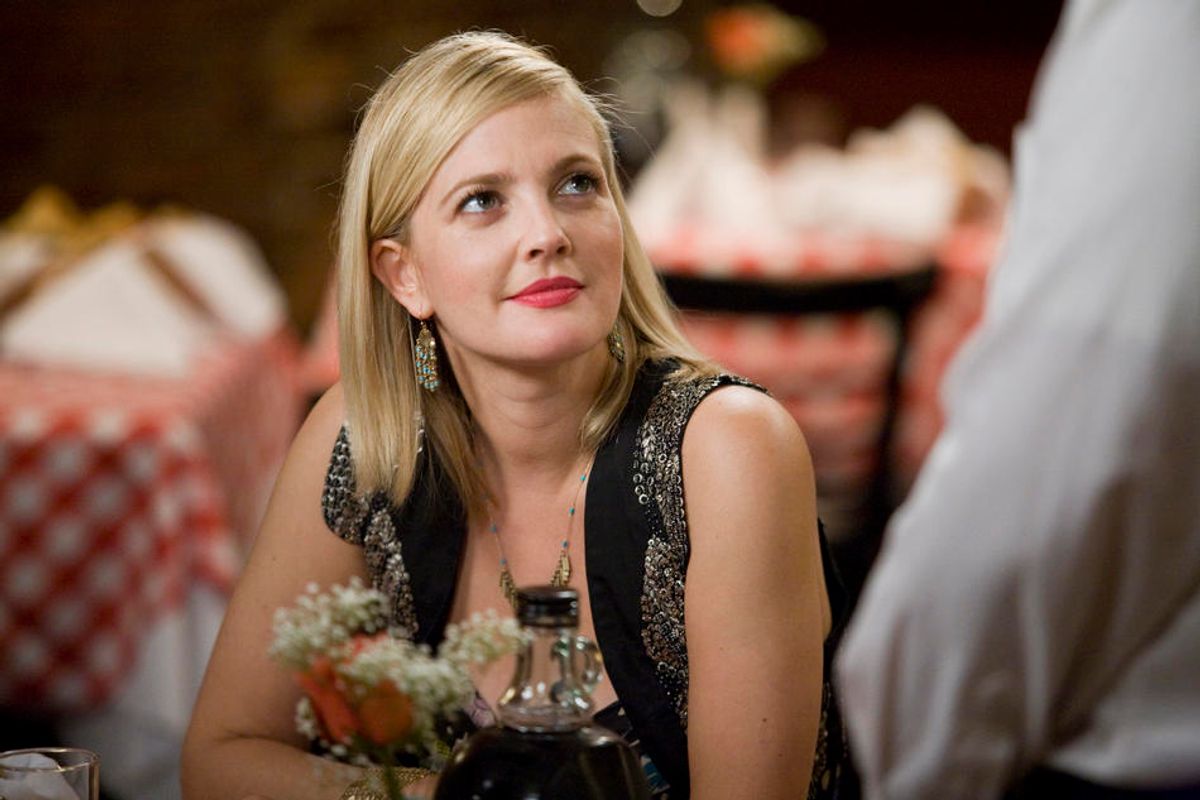 If you want proof that the American romantic comedy is in a dismal state, trapped halfway between apology and experiment, you need look no further than "Going the Distance," which features real-life couple Drew Barrymore and Justin Long as a likable young recession-era duo separated by a continent, a lack of funds and a cloudy future. I don't mean that this movie is strikingly good or strikingly bad, in cosmic terms -- it's a solid but totally forgettable entertainment, redeemed somewhat by Barrymore's loud, horsey laugh and some agreeably racy comic situations.

Here's the thing: Simply by trying to break free of the hoariest situations and archetypes, and to create characters who talk and behave somewhat like actual young (or at least youngish) middle-class Americans, director Nanette Burstein and her cast have made the year's best mainstream rom-com. But seriously, consider the competition: Two "comeback vehicles" for fading stars named Jennifer, both of them self-fulfilling prophecies about the difficulties faced by American actresses over 40, both of them encouraging the media to be both observers and enablers of Hollywood sexism. (Yeah, mea culpa on that one.) "Sex and the City 2," a genuinely idiotic film that got beaten up out of all proportion. "Eat, Pray, Love," which of course doesn't really qualify as a rom-com, but would have been a lot better if it did. And I can't go back to February and revisit the fact that I actually spent a little bit of my life watching "Valentine's Day." I just can't.

So awarding a prize to "Going the Distance" in this context is a little like giving an A for effort to the only student in your class who isn't dropping out to take a job at Chick-Fil-A. It's the only romantic comedy to emerge from Hollywood this year that doesn't feel completely defensive and cynical. It doesn't condescend to its audience or shamelessly yank the emotional chains of middle-aged female viewers. It isn't set in Romcom USA, that mysterious alternate universe where the clothes and cars look convincing but everyone's apartment is three times too large and the conversations and situations all seemingly belong to the Mary Tyler Moore era.

Most impressively, Burstein and screenwriter Geoff LaTulippe do not seem to share the widespread assumption that romantic comedy is a contemptible if economically necessary phenomenon, based entirely on feeding over-35 women a steady drip of the dumbest possible clichés about guys and gals and that joyous-yet-painful thing that happens between them. (Besides home mortgages, I mean. And pubic lice.) "Going the Distance" doesn't always click but has a distinctive, sardonic voice and vision. It at least tries to capture the social world of Erin (Barrymore) and Garrett (Long), a couple of smart but underemployed post-collegiate types who meet over the Centipede machine in a New York bar, smack dab in the middle of a shrinking economy.

Now, am I claiming that "Going the Distance" is a Zeitgeist-capturing yarn of love in our hookup culture, one that may capture the mood of an entire generation? I am not. It has a little of that ambition, which is admirable and all. In bringing together a documentary filmmaker (Burstein made the docs "American Teen" and "The Kid Stays in the Picture") with an unknown screenwriter, this film's producers seem to be splitting the difference between conventional rom-com and more "alt" fare, like the films of indie auteurs Joe Swanberg or Andrew Bujalski. But I strongly suspect the skeptics are right. Of course romantic comedy could come back, and it undoubtedly will. But at the moment it's a moribund genre, with little appeal to the "Twilight" generation of girls and young women. All a pleasant, offbeat movie like "Going the Distance" can hope to do is swim halfheartedly against the ebbing tide.

I spent a little while after watching "Going the Distance" trying to puzzle out its flaws and limitations -- the directing is better than the writing, the actors rise above a pedestrian plot, etc. -- before arriving at the perfect summary: It's kind of good, but not all that great! (Hear that sound? That's the Pulitzer Prize for criticism, whooshin' toward me.) Thing is, Barrymore is so terrific as Erin, a ballsy, physical, foulmouthed guys' gal who's universes away from your average neurotic rom-com heroine, that you keep thinking a movie built around her ought to be awesome. So the fact that is isn't is continually surprising.

When Erin and Garrett go home together after their little contretemps at the Centipede machine -- she was about to hit a high score before he screwed it up -- neither one of them is exactly thinking about a great romance. He broke up with somebody else quite recently (OK, minutes earlier). They do bong hits and make out. She pretends to be outraged that Garrett's hopeless roommate Dan (comedian Charlie Day) is "DJ'ing the hookup," i.e., playing the "Top Gun" score through the flimsy apartment walls while they get it on. They actually have breakfast together the next morning, complete with sincere conversation -- but when Garrett calls Erin later, she still doesn't know his name.

This whole sequence of scenes around the couple's first meeting is so charged with tenderness, toughness and combative, outrageous humor -- and that brash, braying Barrymore laugh -- that one can only wish the rest of "Going the Distance" lived up to it even halfway. But as Garrett and Erin fall in love, Burstein almost immediately resorts to a montage of, God help me, the couple frolicking on the beach or strolling Manhattan's streets hand in hand. See, their idyll is to be short-lived: Erin's a summer intern at a New York newspaper who's heading back to grad school in California, while Garrett works at a record label that used to be hip and is now hoping to survive by finding the next Jonas Brothers.

Yes, the fact that they both work in crippled or dying industries is meant to be significant, but like a lot of other things in LaTulippe's script it comes off as intriguing but a little half-baked. Why is Garrett and Dan's other buddy, Box (Jason Sudeikis), so interested in finding a girlfriend over 45 who will, in some epistemological sense, not be a cougar? Why must we learn strange but irrelevant details about the sex life of Erin's unhinged married sister (played by Christina Applegate, who is very funny)? I think the only reason is that screenplays in the post-Tarantino, late-Apatow era must garnish their supporting characters with all kinds of potentially symbolic eccentricities.

Inescapably, "Going the Distance" gets more flaccid and ordinary as it manages the highly predictable yuks emerging from Garrett and Erin's efforts to keep their relationship going across 3,000 miles of low-budget separation. I never lost interest in this couple, who have a relaxed and natural chemistry together (as I guess they should). If Long's no match for Barrymore, he's still a genial comic performer, and even the most ordinary parts of the film deliver plenty of laughs. You never have the feeling that "Going the Distance" got made because of econometric projections; the people involved actually like it, and that counts for a lot. Can it save the rom-com? Definitely not, but I'm not sure anything can.