The real lesson of Labor Day

The problem with the economy is structure, not the business cycle 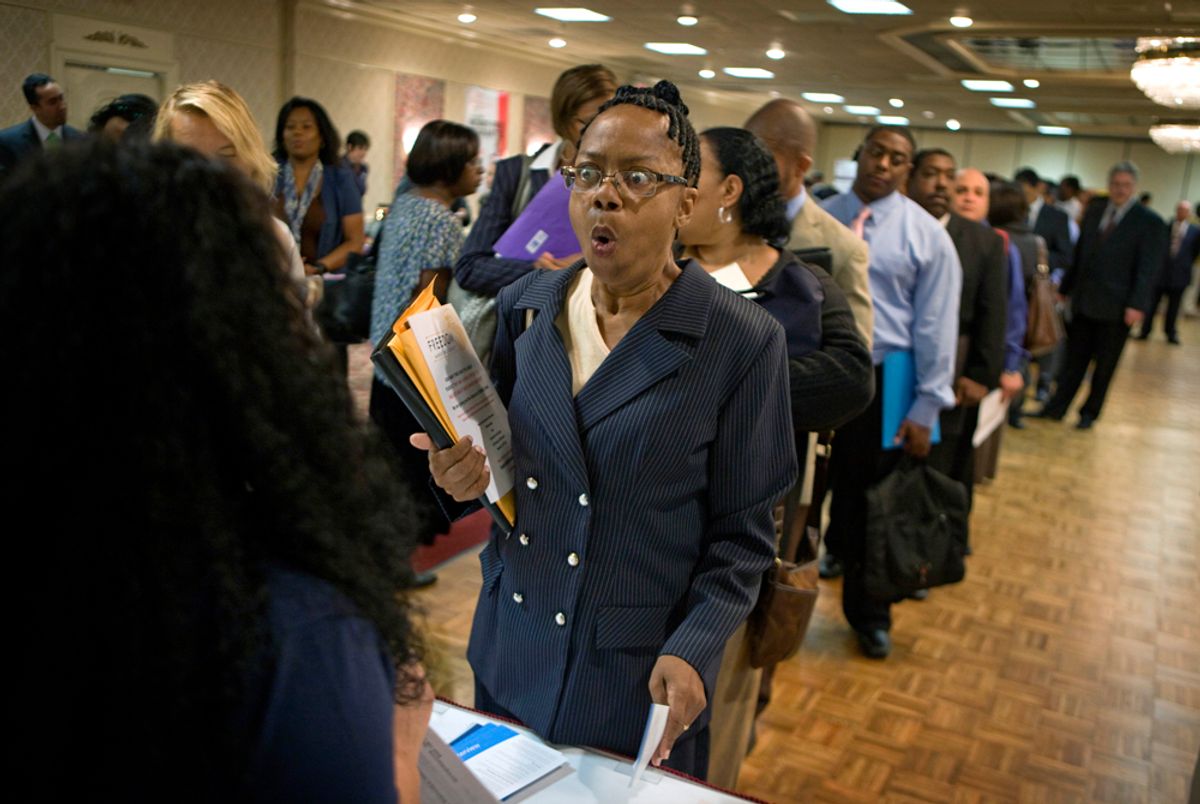 Dabura Karriem, 60, of Bloomfield, N.J., reacts upon hearing there is a job available for exactly what she's looking for as a file clerk at a bank, while attending a career fair in Newark, N.J., Tuesday, Aug. 24, 2010. Karriem's unemployment benefits have expired after being laid off two years ago, the first time she's been unemployed in 38 years. The government on Friday Aug. 27, 2010 is about to confirm what many people have felt for some time: The economy barely has a pulse. Many analysts say the uncertainty surrounding the economy is holding back consumers from spending and companies from investing and hiring. (AP Photo/David Goldman) (David Goldman)
--

Welcome to the worst Labor Day in the memory of most Americans. Organized labor is down to about 7 percent of the private work force. Members of non-organized labor -- most of the rest of us — are unemployed, underemployed or underwater. The Labor Department reported on Friday that just 67,000 new private-sector jobs were created in August, which, when added to the loss of public-sector (mostly temporary Census worker jobs) resulted in a net loss of over 50,000 jobs for the month. But at least 125,000 net new jobs are needed to keep up with the growth of the potential work force.

Face it: The national economy isn’t escaping the gravitational pull of the Great Recession. None of the standard booster rockets are working. Near-zero short-term interest rates from the Fed, almost record-low borrowing costs in the bond market, a giant stimulus package, along with tax credits for small businesses that hire the long-term unemployed have all failed to do enough.

That’s because the real problem has to do with the structure of the economy, not the business cycle. No booster rocket can work unless consumers are able, at some point, to keep the economy moving on their own. But consumers no longer have the purchasing power to buy the goods and services they produce as workers; for some time now, their means haven’t kept up with what the growing economy could and should have been able to provide them.

1. The Origin of the Crisis

This crisis began decades ago when a new wave of technology — things like satellite communications, container ships, computers and eventually the Internet — made it cheaper for American employers to use low-wage labor abroad or labor-replacing software here at home than to continue paying the typical worker a middle-class wage. Even though the American economy kept growing, hourly wages flattened. The median male worker earns less today, adjusted for inflation, than he did 30 years ago.

But for years American families kept spending as if their incomes were keeping pace with overall economic growth. And their spending fueled continued growth. How did families manage this trick? First, women streamed into the paid work force. By the late 1990s, more than 60 percent of mothers with young children worked outside the home (in 1966, only 24 percent did).

Second, everyone put in more hours. What families didn’t receive in wage increases they made up for in work increases. By the mid-2000s, the typical male worker was putting in roughly 100 hours more each year than two decades before, and the typical female worker about 200 hours more.

When American families couldn’t squeeze any more income out of these two coping mechanisms, they embarked on a third: going ever deeper into debt. This seemed painless — as long as home prices were soaring. From 2002 to 2007, American households extracted $2.3 trillion from their homes.

Eventually, of course, the debt bubble burst — and with it, the last coping mechanism. Now we’re left to deal with the underlying problem that we’ve avoided for decades. Even if nearly everyone was employed, the vast middle class still wouldn’t have enough money to buy what the economy is capable of producing.

Where have all the economic gains gone? Mostly to the top. The economists Emmanuel Saez and Thomas Piketty examined tax returns from 1913 to 2008. They discovered an interesting pattern. In the late 1970s, the richest 1 percent of American families took in about 9 percent of the nation’s total income; by 2007, the top 1 percent took in 23.5 percent of total income.

It’s no coincidence that the last time income was this concentrated was in 1928. I do not mean to suggest that such astonishing consolidations of income at the top directly cause sharp economic declines. The connection is more subtle.

The rich spend a much smaller proportion of their incomes than the rest of us. So when they get a disproportionate share of total income, the economy is robbed of the demand it needs to keep growing and creating jobs.

What’s more, the rich don’t necessarily invest their earnings and savings in the American economy; they send them anywhere around the globe where they’ll summon the highest returns — sometimes that’s here, but often it’s the Cayman Islands, China or elsewhere. The rich also put their money into assets most likely to attract other big investors (commodities, stocks, dot-coms or real estate), which can become wildly inflated as a result.

Meanwhile, as the economy grows, the vast majority in the middle naturally want to live better. Their consequent spending fuels continued growth and creates enough jobs for almost everyone, at least for a time. But because this situation can’t be sustained, at some point — 1929 and 2008 offer ready examples — the bill comes due.

2. What We Learned and Didn’t Learn From the Great Depression of the 1930s

This time around, policymakers had knowledge their counterparts didn’t have in 1929; they knew they could avoid immediate financial calamity by flooding the economy with money. But, paradoxically, averting another Great Depression-like calamity removed political pressure for more fundamental reform. We’re left instead with a long and seemingly endless Great Jobs Recession.

THE Great Depression and its aftermath demonstrate that there is only one way back to full recovery: through more widely shared prosperity. In the 1930s, the American economy was completely restructured. New Deal measures — Social Security, a 40-hour work week with time-and-a-half overtime, unemployment insurance, the right to form unions and bargain collectively, the minimum wage — leveled the playing field.

In the decades after World War II, legislation like the G.I. Bill, a vast expansion of public higher education and civil rights and voting rights laws further reduced economic inequality. Much of this was paid for with a 70 percent to 90 percent marginal income tax on the highest incomes. And as America’s middle class shared more of the economy’s gains, it was able to buy more of the goods and services the economy could provide. The result: rapid growth and more jobs.

By contrast, little has been done since 2008 to widen the circle of prosperity. Health-care reform is an important step forward but it’s not nearly enough.

3. What Else Should Be Done

What else could be done to raise wages and thereby spur the economy? I don’t pretend to have all the answers but some initiatives seem worthwhile.

[Pause for a commercial announcement. These points, and others, are developed at length in my upcoming book, “AFTERSHOCK: The Next Economy and America’s Future,” out in two weeks from Alfred Knopf.]

We might consider, for example, extending the earned income tax credit all the way up through the middle class, and paying for it with a tax on carbon. The carbon tax would raise the prices of goods and services especially dependent on carbon-based fuels, which is appropriate given that the social costs of carbon-based fuels should be included in their prices. Consider how much our society now spends on such things as foreign wars designed to secure our sources of oil, as well as oil cleanups. But the wage subsidies would more than make up for these price rises, at least for most Americans in the middle and below.

Another step would be to exempt the first $20,000 of income from payroll taxes and paying for it with a payroll tax on incomes over $250,000. This, too, seems reasonable, given that under current law only the first $106,000 of income is subject to the Social Security portion of the payroll tax – a particularly regressive system. Most higher-income people, who get good medical care, live longer and collect far more in Social Security benefits, than do lower-income people.

In the longer term, Americans must be better prepared to succeed in the global, high-tech economy. Early childhood education should be more widely available, paid for by a small 0.5 percent fee on all financial transactions. Public universities should be free; in return, graduates would then be required to pay back 10 percent of their first 10 years of full-time income.

Another step: workers who lose their jobs and have to settle for positions that pay less could qualify for “earnings insurance” that would pay half the salary difference for two years; such a program would probably prove less expensive than extended unemployment benefits.

These measures would not enlarge the budget deficit because they would be paid for. In fact, such moves would help reduce the long-term deficits by getting more Americans back to work and the economy growing again.

Here’s the point. Policies that generate more widely shared prosperity lead to stronger and more sustainable economic growth — and that’s good for everyone.

The rich are better off with a smaller percentage of a fast-growing economy than a larger share of an economy that’s barely moving. That’s the Labor Day lesson we learned decades ago; until we remember it again, we’ll be stuck in the Great Recession.