Lady Gaga wins the awards, but Kanye's expletive-laden finale steals the show. Plus: Bieber Fever gives us a rash 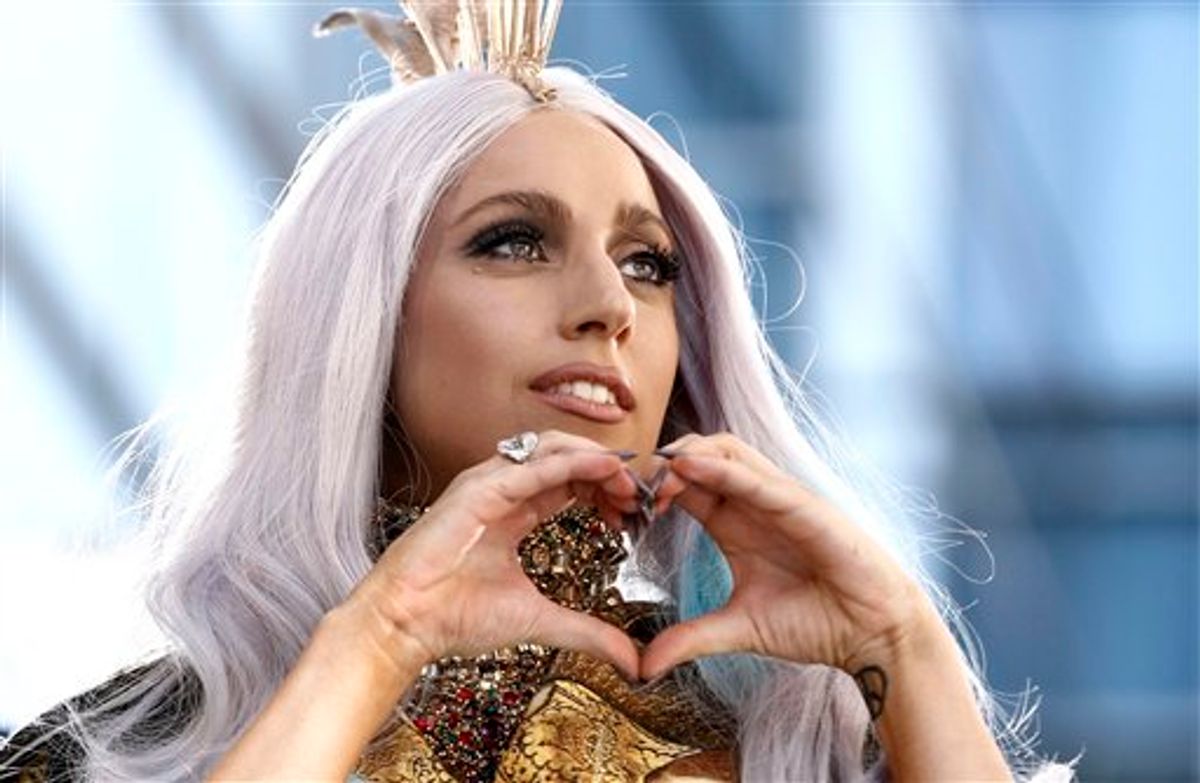 In the end, Kanye West and Taylor Swift kept a respectable distance from each other. Chelsea Handler never gave us a moment that seemed to veer from whatever was on the teleprompter. And neither Katy Perry nor Lady Gaga wore bras that doubled as firearms. And yet, we still have love for MTV's Video Music Awards. They've given us Britney and Madonna snogging; Diana Ross copping a feel on Lil' Kim, and Eminem's sourpuss response to hand puppet Triumph the Insult Comic Dog. The VMAs are more like your Uncle Tommy's funeral: seething with resentments, bubbling over with bad judgment, and rife with tacky behavior. MTV itself may have long abandoned its commitment to both music and video -- thanks, "Real World!" -- but the VMAs remain the gold standard of indulgent pop dysfunction, and this year's "Jersey Shore"-flecked fiasco proved no exception. While there was no outstanding shocker moment, there were still 10 that amused and outraged us enough to keep us from the changing the channel.

10. Combining "8 Mile" with "A Night at the Improv," Eminem opened the show by doing "Not Afraid" in front of a brick wall and a small crowd. Then -- wait a minute! -- the set parted to reveal the glorious real stage and a phalanx of angry drummers (oh, Eminem, didn't you see Kanye's "Love Lockdown" two years ago?). But hold on, there was another twist! It was Rihanna herself, working the icy cool pop princess thing in red wig and tutu, playing well off Eminem's loose cannon energy for a "Love the Way You Lie" duet. It was contrived as hell, but props to Marshall Mathers, who always genuinely looks eager to pop a cap in any and all available ass. He'd already cleared out by the time he subsequently won best male artist and best hip-hop performance. Was his twitchy, anxious appearance concern about making the next plane out of town, or was he just keeping it real? Whatever the cause, his would prove one of the sincerest, most riveting performances of the evening.

9. Host Chelsea Handler set the tone for her determination not to be anything but the most predictable version of herself when she flounced onto the stage in a Gaga-esque getup and declared, "I didn't drink all week. My plan was to stay sober the entire show. But in an interesting twist, I am high as a kite." Based on her deer-in-the-headlights delivery all night, I believe her. Like the incredibly hammered aunt who hits on the clown at your daughter's fifth birthday party, Handler's main appeal these days increasingly seems to be her ability to make you feel considerably better about your own life choices.

8. Eight-time winner Lady Gaga, who loves her Little Monsters so much they may want to start screening her calls, exhibited touching sincerity and humility every time she dragged her wildly overdressed butt up to the podium. Accompanied by four military personnel whose careers had been directly affected by "don't ask, don't tell," she spoke to every misfit weirdo out there as she picked up the prize for best female artist. "Tonight," she said, "we're the cool kids at the party."

7. Hey, remember when the cast of "Jackass" was vaguely relevant? They're even less interesting now. Promoting their 3-D feature film foray into "primitive civilations" (sic), they robotically doled out an award, but not before the saddest removing of pants and shouting of "Let's party!" since your last eHarmony date.

6. Bieber fever unleashed! I am old enough to actually remember seeing Madonna awkwardly writhe around the stage at the very first VMAs in 1984. If there's one thing MTV has a reliable history of, it's making cruel sport of everything that ever made you love pop music in the first place. In fact, if you are watching the VMAs and not at some point screaming "This sucks!" at your television, your last name is probably Bieber. Bieber's performance, a self-aware "Hard Day's Night" by way of the opening of "Austin Powers" pastiche, featured the blow-dried teen superstar plowing through a screaming throng to lip-sync with a team of cardigan-clad dancers, and oh, God, no, children. It was so tame, so tween it could make you weep for the thug life era of New Kids on the Block. That he later won best new artist was a somber reminder this is the same network that also gave us Jesse Camp.

5. Going old school Hollywood, Florence + The Machine did a glamorously overhead-shot, Esther Williams-tinged version of "Dog Days Are Over" that also featured the most searing, goosebumps-inducing vocals of the evening. Gorgeously, gloriously unsettling.

4. Taylor Swift at last came up with a response to her infamous moment from last year, and subtle it was not. In another retro-themed number, she replayed the incident on a vintage television, then stood barefoot and crooned magnanimously, "You're still an innocent, 32 and still growing up now," telling, hmmm, I don't know, somebody out there, "Who you are is not what you did … every one of us is mixed up too." Her voice, notoriously unreliable live, was shaky, but it was unmistakably a live, unsweetened performance. As entertaining as the notion of her telling Kanye to suck it may have been, her performance was ultimately a model of pure class.

3. Performing "The Catalyst" from the Griffith Park Observatory (made famous, of course, by that Paula Abdul video) Linkin Park proved that angry guys who rock out in their parents' basements still must be buying music. There was smoke! And flashing lights! And a soulful keyboard interlude! And some YEAAAAAAH! When aliens invade the planet and ask us to show them what every rock 'n' roll cliché humanity has to offer looks like, we shall show them this.

2. Quick -- if you've over 35, answer honestly -- could you still wriggle yourself into your favorite ensemble from 20 years ago? Would you? Kudos then to senior citizen and possible animatronic creature Cher, raising the bar for truly brave behavior by strutting out in her famous, leaves-little-to-the-imagination ensemble from the "Turn Back Time" video. Looking like she could not give less of a crap what anybody thinks, she proudly introduced herself as "The oldest chick with the biggest hair and the littlest costume." And when she handed the award for video of the year to a raw meat-clad Lady Gaga and the two icons hugged, it was the gayest moment in modern history. Shine on, crazy grandma.

1. What was the evening leading up to if not Kanye's big finish? I mean, Jesus, between Taylor's song and his, the whole evening was the most public display of "Seriously, we are both totally over this thing" since Facebook introduced the relationship status button. Earlier he'd excitedly tweeted that he knew his late mom was "looking down." And so, with heaven's apparent blessing, he took to the stage in a bright red suit and declared, "You been putting up with my shit too long."

What followed was the bleep button bonanza "Runaway," wherein he offered "a toast" to assholes, scumbags, douchebags and jerkoffs while dainty ballerinas flitted gracefully about. It was combative and kooky, and just might give Cee Lo Green NSFW competition for most hilariously profane song of the year. In fact, it was so quirky and fabulous, the only real question is: Why did MTV ever choose that Handler chick, instead of giving Kanye the whole damn show?