The two women are flouting conventional ideas about old age and beauty. Why are people so angry about it? 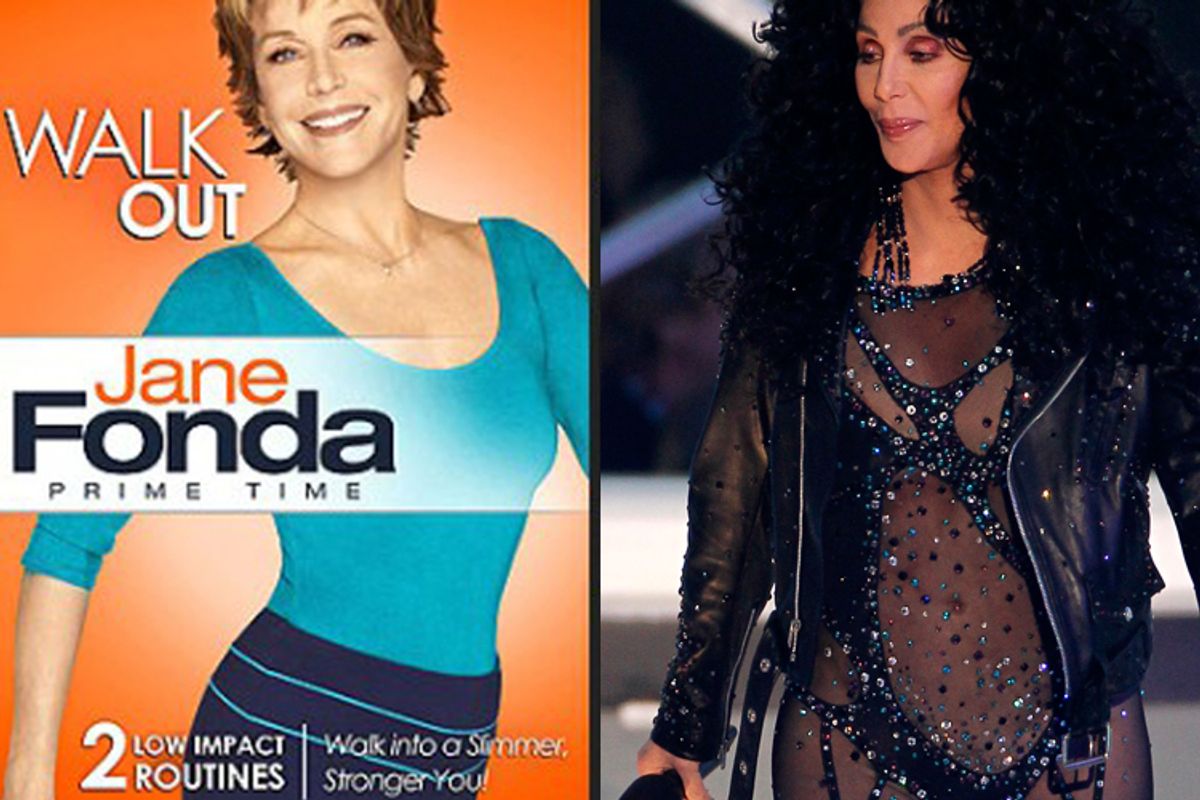 Oh, those decadent Hollywood stars, setting a bad example for females everywhere with their tarted-up, slatternly outfits, their impossible, surgically enhanced physiques and their don't-give-a-damn attitudes. What kind of role models are they for that oh-so-impressionable demographic: our grandmothers?

In the same week 64-year-old Cher took the stage at the VMAs in a re-creation of her notoriously revealing "Turn Back Time" ensemble (and cracked that ""Back in the day, I used to get thrown off MTV for wearing things like this"), 72-year-old Jane Fonda both announced she's getting physical again with two new workout DVDs and admitted she's recently gone under the knife to freshen up her face. "I got tired of not looking like how I feel," she explained.

Faster than you say "butt lift," the critics started sharpening their knives, complaining about Fonda's "smug" attitude and Cher's refusal to "grow old gracefully" with her "NOT age appropriate"  ensemble. How can Fonda, her detractors wondered, a woman who calls her new fitness series "Prime Time," be a healthy example -- with her history of eating disorders  and her own admission she has "good genes and money"?  Gosh, why can't senior citizens just be cute and maternal like Betty White?

Whether they're Taylor Momsen or Raquel Welch, ladies who push the boundaries of how women their age are supposed to behave have a way of making people very uncomfortable. Being sexy and attractive are all but required of the 18- 25 set. But outside of those narrow parameters, well, missy, are you really going to go out dressed like that?

It's easy to view the seeming stubbornness of those fright-wigged, frozen-faced celebrities as a pitiful attempt to hang on to something better graciously relinquished. Forget the cougar thing and move on already, sister! A woman who doesn't go quietly into her post-menopause years is not, after all, the same as the lovable old rake with the trophy wife, the septuagenarian smoothie who can straight-facedly tell the opposite sex that he is still quite the catch.  Or, as an online troll once commented, "Face it. Women have an expiration date."

But there's more to it than the scary specter of geriatric sexuality. As we all lurch toward the grim reaper, the difference between the haves and have-nots becomes abundantly, sometimes painfully clear. Beauty is something bestowed indiscriminately on rich and poor youth alike. Dewy skin and a fine booty are not the exclusive territory of trust fund kids. But by the time you've long cashed in your V-card for an AARP one, it's all about the maintenance. And the privilege that women like Fonda wear on their faces could set off more envy at the senior center than a fleet of Megan Foxes could inspire at a junior high. Their good health and smooth skin aren't merely the result of the average movie star's hard work and lucky DNA. They're the product of wealth. Cue resentful class rage!

Do women like Cher and Fonda look natural or even conventionally attractive? Is a stiff, shiny visage and hard-won taut physique the best the rest of us can hope to have in our own golden years? That's up to the individual and her wallet to decide. But why would anyone expect two Academy Award-winning superstars who've spent their careers marching to their own beats and thumbing their chiseled noses at convention to settle down into tame dotage? Who grows old like Cher? Only Cher, folks. That's why she's Cher.

Those superstars' histories and choices may be far bumpier than their well-maintained bodies, but Cher and Fonda remain role models anyway. It's not necessarily because anybody would want to look just like them. It's because they're doing what they want, critics and convention be damned. Plastic surgery and duct-tape ensembles are not for everybody. But nonconformity? That's eternally beautiful.