Why getting tough with China won't solve our jobs problem 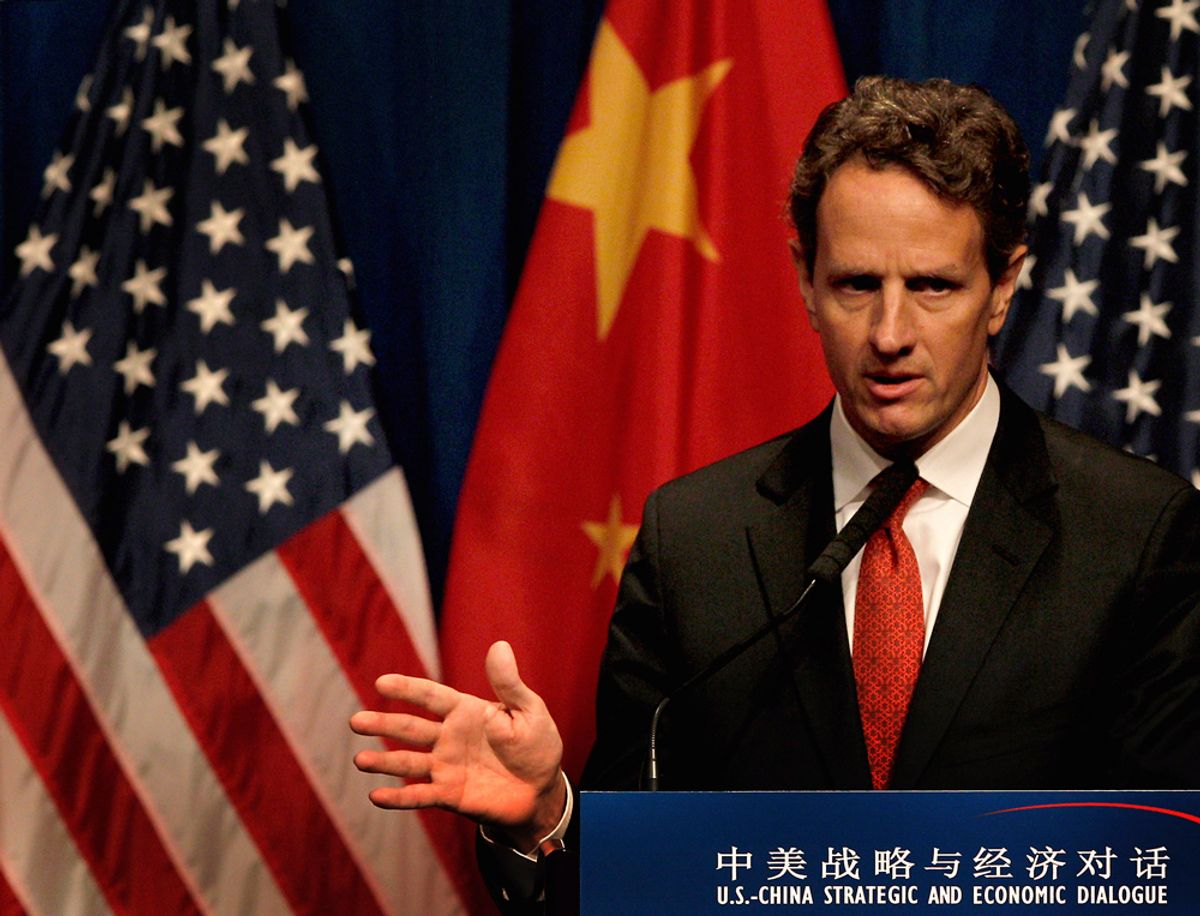 With unemployment in the stratosphere and the midterm elections weeks away, politicians naturally want to show voters they’re committed to getting jobs back.

So now they’re getting tough on China.

But it’s a dangerous ploy based on wishful thinking.

Treasury Secretary Tim Geithner told the Senate Banking Committee Thursday the Administration is "examining the important question of what mix of tools, those available to the United States and multilateral approaches, might help encourage the Chinese authorities to move more quickly." Translated: We’re on the verge of threatening them with trade sanctions.

Even this didn’t satisfy the senators. Charles Schumer (D-New York) charged that trade with China "diminishes America, our standard of living here in America, and America as a world power." Richard Shelby (R-Ala) demanded to know why "the administration protecting China by refusing to designate it as a currency manipulator" -- a designation that could lead to trade sanctions.

On Wednesday the U.S. filed a pair of complaints against China with the World Trade Organization, alleging China was unfairly denying American companies access to its market. Meanwhile, several Democrats facing elections in November are introducing measures that would allow companies to pursue sanctions against China for manipulating its currency.

It’s true China has kept the value of its currency artificially low relative to the dollar. If China allowed its currency to rise, Chinese exports would become more expensive to us and our exports would be relatively cheaper to them. This would help shrink the trade imbalance.

It’s also true China has dragged its feet. In June, the U.S. stopped short of branding China a currency manipulator after China promised to reform its ways. But since then China’s currency has risen just 1 percent relative to the dollar.

America’s trade imbalance with China is growing. In the first half of this year, China exported $119 billion more goods and services to us than we did to them – putting the two nations on course to exceed last year’s $227 billion trade gap.

But it’s naive to assume all we have to do to get Chinese to do what we want is to threaten them with tariffs.

First, they might retaliate. Remember, China is the biggest foreign investor in U.S. Treasury securities, with holdings of more than $843 billion. If China were to start selling off large amounts, America’s borrowing costs would soar – and we’d end up worse off.

Second, it’s already costly to China to keep its currency artificially low – requiring that China buy loads of dollars. So why would anyone suppose that making it more expensive for them would bring China around?

China has been willing to bear this huge cost because its export policy doubles as a social policy, designed to maintain order.

Each year, tens of millions of poor Chinese stream into China’s large cities from the countryside in pursuit of better-paying work. If they don’t find it, China risks riots and other upheaval. Massive disorder is one of the greatest risks facing China’s governing elite. That elite would much rather create jobs than allow its currency to rise substantially and thereby risk job shortages at home.

Third, even if China did allow its currency to rise against the dollar, there’s no reason to think this would automatically generate lots more American jobs.

American exports would become cheaper to Chinese consumers. But Japan, Germany, and other major exporters would also demand a piece of the action. Unemployment is high in all developed nations, and every government is under pressure to create more jobs.

What worries me most about all this tough talk about China is it diverts attention from the real problem. America isn’t suffering high unemployment because we’re buying too much from China and not selling them enough. Trade with China is a small portion of the U.S. economy.

After three decades of stagnant middle-class wages, during which almost all the economic gains have gone to the top, we’ve finally reached a day of reckoning. The middle class can no longer borrow vast sums by using their homes as ATMs. They can’t squeeze more working hours out of two wage earners. And they have to start saving for retirement.

The central challenge we face isn’t to rebalance trade with China. It’s to rebalance the American economy so its benefits are more widely shared.