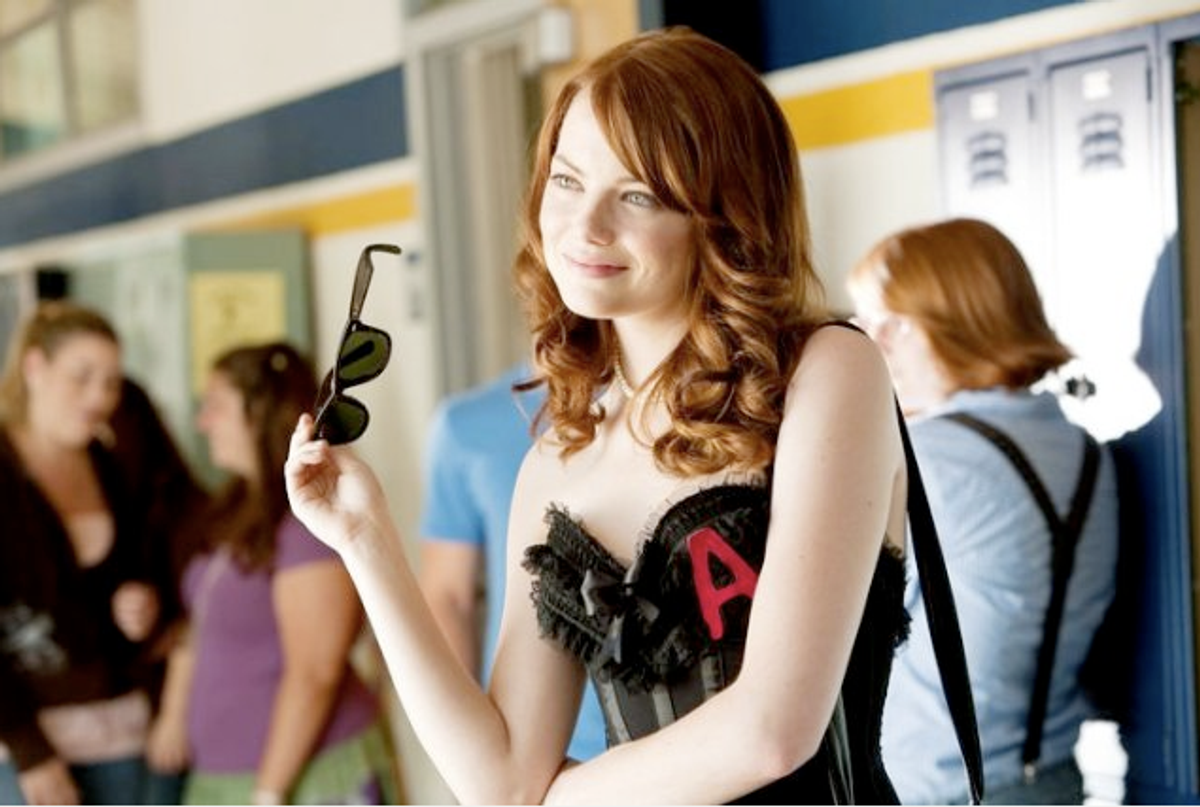 Look, I'm not going to claim that the high-school non-sex comedy "Easy A" is the movie of the year, or the best thing I saw in Toronto this year or anything like that. But director Will Gluck's whimsical teen inversion of Nathaniel Hawthorne's "The Scarlet Letter" -- it's not really an adaptation, at least not in the "Clueless"/"Emma" sense -- arrives as a thoroughly delightful surprise, after a summer full of dim and dreary comedies.

People are suddenly falling all over themselves for Emma Stone, who stars here as Olive Penderghast, a high-school wallflower who makes the crucial mistake of claiming to have had a wild one-nighter with a college student. (She hasn't.) Now, it is true that Stone is almost 22 and is undeniably cute as a doggone button, so having her play a 17-year-old who's never been kissed (unless you're counting an eighth-grade game of Spin the Bottle) may be stretching suspension of disbelief past the snapping point. But if you're willing to make allowances for Hollywood ludicrousness, she pretty nearly pulls it off.

Olive is a bit of a blabbermouth -- hence the elaborate erotic falsehoods she spins for her would-be-trampy best friend, Rhiannon (Aly Michalka) -- she's got exactly the kind of dry, intelligent sense of humor that could intimidate dudes, and her wardrobe and hairstyle are subtly, indefinably square. On the weekend she was supposedly engaged in Kama Sutra-challenging bonkage with Joe Community College, Olive spent most of her time playing with her dog and singing along with a card from her grandmother that plays Natasha Bedingfield's "Pocket Full of Sunshine." (This makes for one of the funniest, and funnest, passage-of-time montages in film history.)

Maybe the secret to Bert V. Royal's highly satisfying screenplay for "Easy A" is its insight into the fact that teenagers are more than conniving, canny mini-adults who live their lives through electronic gizmos. I mean, they may be all of that, but they're also kids. Olive is recognizably a late bloomer and a bit socially gauche, but the film makes that seem completely charming, never like a bad thing. However worldly she wants to appear to others, and however damn smart she is, there's an energy and enthusiasm about Olive that belongs to childhood. She had a great time with Natasha and the pooch -- it's the unexamined pressure to grow up fast that makes her think she's supposed to have been blowing a frat boy instead.

Olive's career as a fictitious slut really takes off after her friend Brandon (Dan Byrd), who is widely -- and correctly -- assumed to be gay, asks her to fake a late-night party hookup so he can play straight until graduation. Rumors spread and metastasize in electronic fashion: Olive did it with three guys in a hot tub; Olive will do it with anybody for money, or at least for a $100 gift card from Staples. And like so many rumors, these contain a grain of truth, in that Olive really does become a virtual prostitute, attesting to the manhood of North Ojai High's nerdiest, fattest and most testosterone-impaired male denizens. That is, for the right remuneration, she won't contradict you when you tell people you got to second base with her, or even most of the way to third. She was awesome, of course; not touching whatever parts of Olive you didn't touch has changed your life.

It's pretty easy to see where this is going: Olive enjoys all the attention at first, but the ensuing insane notoriety somewhat less. Marianne (Amanda Bynes), the utterly terrifying leader of the school's Christian prayer circle, makes Olive's scandalous conduct the subject of a morality crusade, and even Rhiannon, dethroned from her post as class hussy, turns against her. Somewhere out there is hunky man-of-few-words Woodchuck Todd (Penn Badgley), so named for his school-mascot costume, ignoring the rumors and watching over Olive from a protective distance.

"Easy A" definitely won't be the only movie of the next few years to channel the late John Hughes, but it might be the only one to demonstrate a stalker-level obsession with Hughes while capturing so precisely the funny-sad-sweet tone of his best tales of adolescence. (I really don't want to give this away, but if you're wondering whether that means there's an irrelevant, somewhat self-mocking but totally fun musical number at around the three-quarter pole, you're on the right track.) While Stone's star-making performance is unquestionably the heart of the film, Gluck follows Hughes' lead by casting even modestly sized adult roles memorably.

None are more intoxicating than Patricia Clarkson and Stanley Tucci as Olive's parents, turning what could be garden-variety befuddled but loving characters into an irresistible pair of wisecracking eccentrics. They seem utterly unbothered by the turmoil surrounding their only daughter, maybe because they're still riding the waves of long-ago sexual and chemical experimentation. (Well, OK -- not so long ago as all that.) Indeed, they almost undermine the movie; why does Olive even bother with school when she could be hanging out with these two?

Remaining nearly stone-faced through the entire film, Thomas Haden Church plays Mr. Griffith, the beloved, mock-hardass English teacher who assigns Olive "The Scarlet Letter" in the first place. (As she notes in the video diary that frames the story, no one else read it; they all watched the movie version where Demi Moore speaks in a plummy English accent and takes lots of baths.) He's married to the hot-tempered guidance counselor (Lisa Kudrow), who dispenses Olive bad advice and condoms she doesn't need, and also supplies a crucial if somewhat icky plot twist late in the story. Malcolm McDowell gets one scene, as the blustery principal who's determined to "keep the girls off the pole and the boys off the pipe," and makes the most of it.

"Easy A" doesn't have a whole lot to do with "The Scarlet Letter," unless you think Hawthorne patented the notion that gossip can be vicious and unfair and invented the Serenity Prayer into the bargain. But when I read other critics dismissing it as a lightweight or fluffy teen comedy, as some did in Toronto, I honestly don't know what they mean. Is it lightweight or fluffy because it's in color, and doesn't end with Olive burned as a witch or floating face down in a Scottish pool? This is a breezily rebellious film that challenges all our oh-so-serious nostrums about teenagers and sex and family life, a bittersweet song of innocence and experience that's often very funny and hardly ever cruel.