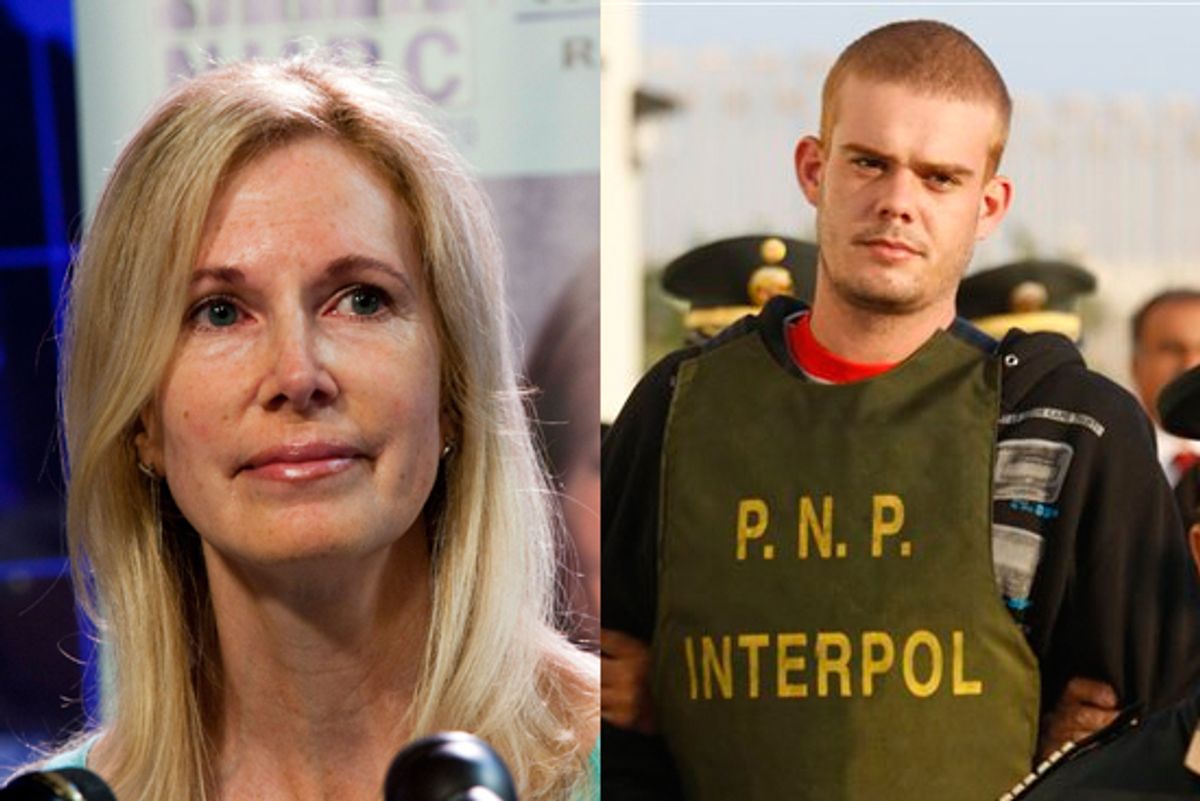 You could excuse Beth Holloway-Twitty for just about anything, however far-fetched the gesture might be. The mother of Natalee Holloway, who disappeared five years ago during a high school class trip to Aruba, still has no substantial answers to what happened to her child after she was seen with Dutch student Joran van der Sloot. Van der Sloot, after attempting to extort $250,000 from the Holloway family to reveal the location of Natalee's body and allegedly detouring briefly into sex trafficking, is currently in a Peruvian prison regarding the murder of Stephany Tatiana Flores Ramírez in a Lima hotel last May, five years to the day after Holloway vanished.

With a track record like van der Sloot's, the list of people who'd like a word or two with him must be pretty long, but surely few would have as much justification as the elder Holloway. So this week she did what  you'd expect a grieving mother to do – she confronted him. Perhaps motivated by van der Sloot's recent jailhouse interview in which he justified his extortion gambit because "I wanted to get back at Natalee's family; her parents have been making my life tough for five years," Holloway-Twitty, accompanied by Dutch television journalist Peter de Vries, went into Castro Castro Prison looking for explanations.

Insisting she "has no hate in her soul for him," Holloway-Twitty went to Peru to, in the words of her lawyer John Kelly, "deliver the message that she hasn't gone away. She's determined to get answers." But van der Sloot offered no new information to illuminate or comfort his alleged victim's mother. Instead, he reportedly simply referred her to his attorney. And when prison officials realized the visit was being recorded, they abruptly ended it, escorting Holloway-Twitty and company off the premises. Speaking on the "Today" show, her lawyer said, "She'd made up her mind to do it and she didn't want to hear anything to the contrary ... This was just a mother acting on her instincts."

When life twists in ways horrible and senseless, we can't help that instinctive grasp for answers. And when none appear, we'll settle at least for some justice, a word or gesture that grants us permission to move on, or a moment to have our say. Any measure, if it might promise what is so tritely referred to as closure. Yet how often does life give us any of those things? Beth Holloway-Twitty's jailhouse confrontation -- replete with cameras ready to capture the longed for "aha" moment -- was painfully understandable. It was just as painfully futile. How could a man like van der Sloot be expected to tell her what she needs to hear, to help her now? There's no financial gain in it now for van der Sloot, no "getting back" at the Holloways.

Is a nightmare explained somehow better than a nightmare that's random? Are details always better than ignorance? And could van der Sloot have said anything to Holloway-Twitty that would make the past five years better? What can make the loss of a child better? Logic says nothing, but the heart insists otherwise. That's why the tragedy of what happened to the Holloway family doesn't end with the disappearance of Natalee. It goes on every day that we human beings, in our primal, basic need for meaning and understanding, find no satisfaction. And it's devastating, because the price of having a soul is to cling to hope. And a person without one will never give it to you.