The actor/director plays an angelic Irish thug in this new crime thriller with a silly, offensive premise 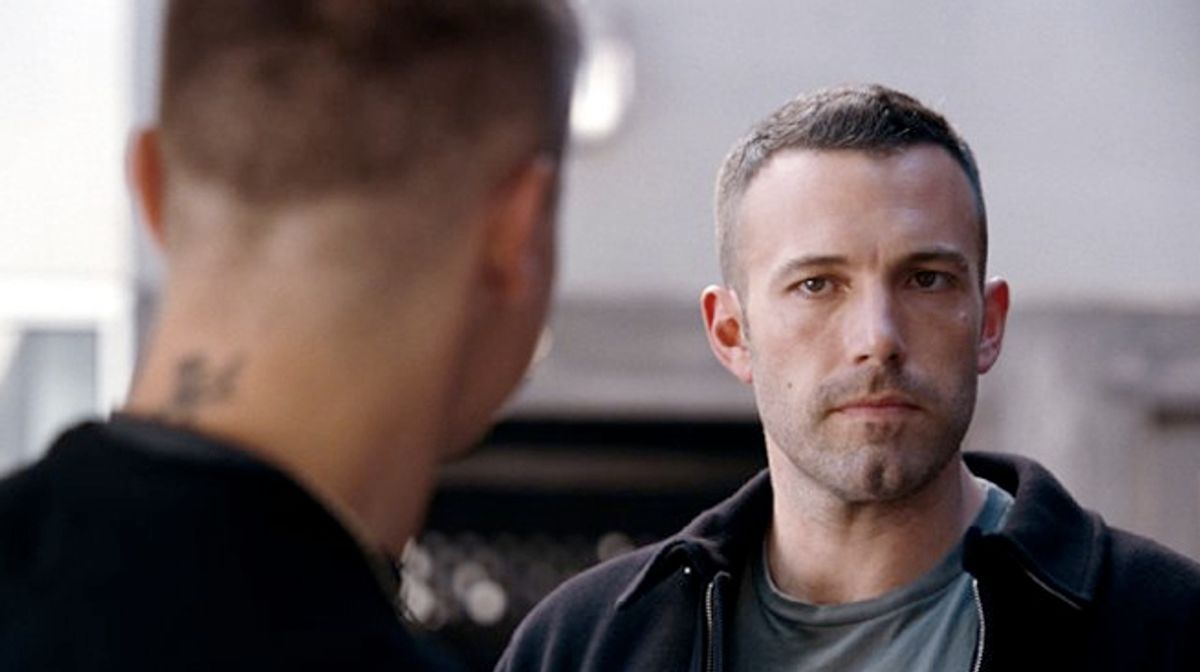 It's tough not to root for Ben Affleck, a genuinely likable guy who has risen from indie-film outsider to become a major Hollywood star, and now seems partway through a mid-career shift behind the camera. His first feature as a director, the dark 2007 crime thriller "Gone Baby Gone," was imperfect but admirably intense, and captured the clannish, claustrophobic atmosphere of author Dennis Lehane's Irish-American Boston neighborhoods convincingly. But I detect troubling signs of celebrity malaise in Affleck's new film, "The Town," which you can't even describe as more of the same. It's less of the same.

For one thing, the material here -- a screenplay written by Affleck, Peter Craig and Aaron Stockard, based on Chuck Hogan's novel -- is closer to a mediocre, generic imitation of Lehane than to the real thing. "The Town" refers to Charlestown, another of those Bah-sten nay-buh-hoods where guys with pseudo-Celtic tattoos and too much silver jewelry stand around and talk in unnecessary expositional detail about how they grew up together and love each other's drunken moms and dads. Check out my last name -- I am personally aware that such places and people still exist. It's still an act of odd, racially tinged nostalgia to focus so lovingly on the diminishing white-ethnic criminal class amid the much wider range of evil available in 21st-century America.

According to an opening credit, Charlestown has produced generations of bank robbers and armored-car unloaders, and Affleck plays Doug MacRay, leader of a gang of young Townie thugs who work under a sinister florist named Fergie (Pete Postlethwaite, with a menacing Northern Irish burr). After one lucrative bank heist, Doug's hothead buddy Jem (Jeremy Renner) insists on abducting the branch manager, a terrified young woman named Claire (Rebecca Hall). Ultimately they just threaten Claire, take her ID and then let her go, but the whole thing disrupts their equilibrium. Are they those kinds of criminals now? And how much did Claire see and hear, exactly?

Jem wants to solve the problem the easy way -- say, by shooting Claire in the head and dumping her in Boston Harbor -- but Doug nominates himself to figure out exactly what she's telling FBI debriefer Adam Frawley (Jon Hamm of "Mad Men," enjoyably crusty in a mostly static role). She turns out to live conveniently nearby, in one of Charlestown's yuppified 19th-century buildings, so Doug bumps into her at the laundromat, cracks wise in his earthy, working-class fashion and, you know, one thing leads to another. While they're having their getting-to-know-you sessions over sidewalk glasses of chardonnay, Dougie somehow forgets to mention that he was the masked dude who held her at gunpoint in the back of an unmarked van -- although he's very understanding about her skittishness and night terrors.

Now, that's an utterly silly and indeed offensive premise for a movie, but we've all seen way stupider ideas carried off successfully. Affleck stages reasonably competent heist scenes, along with a memorably awesome getaway chase in the cramped streets of Boston's scenic North End. These get bigger and sillier as they go along, until we wind up witnessing a Fenway Park robbery attempt that rivals the Normandy invasion in scale. But given the debased standards of action cinema these days this might be enough to make "The Town" a hit. But almost everything else about the movie is badly off balance, starting with Affleck's decision to cast himself as the implacably sexy and good-hearted Doug, who despite his lengthy criminal career has never done anything odious and who, apparently alone among the hoodlums of Charlestown, yearns for some "Shawshank"-style redemption.

Possibly because there's no director telling Affleck what to do, Doug comes off as a bland, blank character, more a collection of honorable attributes and iron-toned muscles than a human being. His romance with Claire is not worth the effort of suspending your disbelief and, way worse, not that hot; what kind of dumb girl gets this serious this fast with a guy she met at the laundromat and knows nothing about? (Much as I love Rebecca Hall's acting, this role is a badly undercooked assemblage of tics, tears and protestations.)

Affleck is totally overwhelmed by Renner, who plays the vengeful, violent, oddly charismatic Jem as if he had a 102-degree fever and burning fuses sticking out of his ears. (As much as it would be a very bad idea to fall in love with Jem instead of Doug, it would be way more comprehensible.) For that matter, Affleck is overwhelmed by Hamm's foulmouthed, spectacularly bitter FBI agent, who gets maybe one-fifth of the screen time. Hell, Blake Lively totally kills in a couple of scenes as Krista, the trashy bad girl Doug has left behind. There's an ugly-sexy, manipulative bar scene between Frawley and Krista that made me wish the movie was about them, instead of the boring bank robber and the weepy, neurotic chick.

Casting yourself as the tuff-tawkin', crook-wit'-a-hahta-gold hero of a movie you co-wrote and directed doesn't quite seem like something Ben Affleck would do. That sounds more like the behavior of some massively vain celebrity who's totally convinced himself of his own authenticity, good intentions and all-around coolness. See what I did there? No, but seriously -- I don't think those things about Affleck, or not yet. But the virus of celebrity certainty can be difficult to treat and almost impossible to cure, and he needs an immediate intervention. So, Ben: I love you, but your movie's kinda stupid. Go make a better one. You'll thank me for this one day.