The "obscenity" of comparing Americans to "killers and terrorists"

A couple of weeks ago, I took issue with some of the objections being voiced by progressive critics of Markos Moulitsas' new book, The American Taliban.  In particular, I found this sentence from The American Prospect's Jamelle Bouie -- fairly representative of the negative reaction to the book -- to be not only absurd but almost offensive in its self-loving nationalism:  "Yes, progressives are depressed and despondent about the future, but . . . . it doesn't excuse the obscenity of comparing our political opponents to killers and terrorists."  For the reasons I explained, it seems to me that only jingoistic blindness can account for the belief that it is "obscene" to compare the American architects and enablers of the attack on Iraq and the worldwide torture regime (among other crimes) to "killers and terrorists."  The former are the latter, by definition.

I didn't intend to return to this topic, but The American Prospect's Adam Serwer has now defended his colleague Bouie against my critique, a defense cited yesterday (presumably with approval) by Andrew Sullivan.  Beyond that, there's one substantive point raised by this dispute which I think is quite interesting and important and thus merits more attention.

Initially, I must note how odd it is for Serwer and The Prospect, of all people, to be leading this charge, given that Serwer himself six months ago wrote a (genuinely superb) piece for The Atlantic entitled "American Takfiris" which equates John Yoo, Jay Bybee and their "cohorts in the [Bush] Office of Legal Counsel" with Al Qaeda leaders ("takfirism," Serwer explains, is what "allowed al Qaeda to, for all intents and purposes, kill anyone they wanted without violating the laws of Islam": somehow, "American Taliban" is beyond the rhetorical pale, but "American Takfiris" is perfectly acceptable).  And then there's the fact that TAP's Editor-in-Chief, Robert Kuttner, wrote an article in February of this year -- in that very magazine -- entitled . . . . wait for it . . . .  "American Taliban," which repeatedly compared the American Right to the Taliban with sentences like this one:  "With the complete takeover of the GOP by an American Taliban, the party should be doomed to minority status."  How can Prospect writers possibly rail against Moulitsas as though he committed some grave sin without grappling with these identical "transgressions," including from TAP's own chief editor and from Serwer himself (Serwer claims that his Al Qaeda comparison was narrowly focused on Bush OLC lawyers while Moulitsas generalized much more, but I wonder if Serwer even read American Taliban because Moulitsas is quite specific in citing his culprits, as opposed to Kuttner, who applied the term to the GOP generally).

As for the substance of the argument, I want to be clear:  I believe and wrote explicitly (contrary to what TAP's own Editor apparently believes) that in many areas -- sexual morality, the status of women, state enforcement of religious dogma, etc. -- the actual Taliban is so much more extreme than the mainstream American Right that, shared premises notwithstanding, they are not similar (and in those areas, Moulitsas is using a rhetorical tactic to subvert the Right's own tactics; the efficacy and fairness of Moulitsas' approach in that regard can be and has been reasonably debated).  But in other areas, particularly war -- which happens to be the title of Chapter 2 of Moulitsas' book -- the comparison is more than apt in a literal sense.  To see why that is so, just consider this chart, posted yesterday by E.D. Kain (click on image to enlarge, or see it and similar ones here): 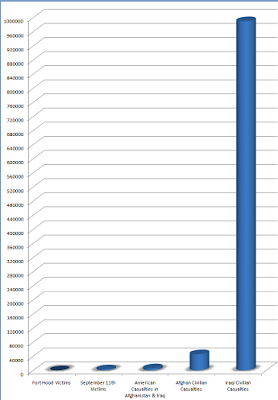 What's "obscene" is not the comparison between those responsible for this and the Taliban.  The real obscenity are those who stand up and say:  how dare you compare my fellow Americans who did this "to killers and terrorists" (it should be noted that this chart reflects the most conservative estimate of the number of Iraqis killed).  That righteous objection is designed to minimize the breadth and depth of American crimes -- oh, it may be bad, but it's not that bad/American warmongers may be bad, but they're still Americans, and thus shouldn't be compared to those inhuman foreign Muslims over there -- and that's the real "obscenity."

In a Twitter exchange I had with him, Bouie argued that the number of innocent civilians killed is not the only factor determining one's immorality.  That's true, but it's certainly one factor:  a very important one.  But move beyond numbers.  As I documented in my original argument, The Nuremberg Trials established the proposition that "aggressive war" -- which is what the attack on Iraq unquestionably was -- is the supreme crime ("The central crime in this pattern of crimes, the kingpin which holds them all together, is the plot for aggressive wars"), and a central purpose of the Tribunal was to deter future "aggression by any other nations, including those which sit here now in judgment."  And Sullivan himself has repeatedly compared America's torture regime to the Gestapo system and others used by history's most monstrous regimes both in terms of tactics and justifying rationale ("The question Americans have to ask themselves is why they hold the former president and vice-president to lower moral and ethical standards than the United States once held the Gestapo").  Given all of that, what's the basis for the claim that it's wildly inappropriate to compare Americans responsible for such crimes to "killers and terrorists"?

I believe what's driving the discomfort with the comparison is that we all know people who cheered for the attack on Iraq, America's torture regime, lawless imprisonment and the like.  They're our relatives, friends, neighbors, co-workers, political allies and sometimes even ourselves.  But few of us know supporters of the Taliban.  Thus, as is always true with people we don't know, we're perfectly comfortable with extreme, two-dimensional demonization of Taliban sympathizers and other Islamic extremists, while taking offense at the notion that the people we know -- like that funny, kibbitzy guy down the hallway in The Atlantic offices -- could possibly be anything like them, notwithstanding their support for similar, extremist actions.  One sees this premise creeping into Serwer's response, quoting what I wrote:

Point is, you cannot argue that the demonization of a religious and ethnic other for the purposes of justifying endless, limitless war is a bad thing and then apply the same blanket comparisons to your political opponents. Rather than "destroying the rotted premise" at the heart of the moral cretinism of the warmongers he is criticizing, Greenwald is reinforcing it by legitimizing its use in domestic political debate. This argument doesn't illuminate anything about the motivations of "The Enemy"; it makes the GOP as a whole "something utterly foreign, inhuman, and subject to entirely different drives than Us." I don't see where that gets anyone, particularly since I don't think it's accurate.

The cartoonish demonization of our Enemy is accomplished by mindlessly screaming inflammatory, manipulated labels at them --"Terrorists!" -- designed to rob them of their Humanness, obliterate nuances among them, and convert them into some incomprehensible Other.  That's how we justify to ourselves what we do to them.  But the reality is much more complex than that.  As even American military leaders acknowledge, "the Taliban" is composed of many diverse factions with different motivations, including a desire to expel foreign armies (i.e., us) from their country.  Many of their leaders are malicious extremists and monsters who advocate heinous policies and engage in incomprehensibly vile acts, while many of their supporters are motivated by innocuous or even reasonable fears and objectives which are easily exploited.  In other words, they are quite similar in composition and drives to most other political factions which end up endorsing and perpetrating heinous acts, even when those factions are American.

The insistence that this comparison between Us and Them is inherently invalid and even "obscene" lies at the heart of so much mischief -- it's the linchpin of exceptionalism and jingoism -- and it's very disappointing to see this claim being so casually invoked in reaction to this book.  The nature of tribalism is that one always thinks their side is better and the other side worse, and that comparisons between the two sides (or even equal application of standards to each) is deeply unfair and offensive ("moral relativism").  Tribalism is a powerful human drive, which is why even those who are aware of its intoxicating effects and even consciously try to avoid it -- all of us -- nonetheless sometimes succumb to its temptations.

I'll be traveling this week, doing various shows and events which I will post as they happen.  But there is one public event I wanted to promote now.  On Wednesday, September 22, at 6:00 p.m., I'll be at Brooklyn Law School for an event on the Israeli flotilla attack, sponsored by a variety of student groups.  Also on the panel are Columbia University Professor Rashid Khalidi and lawyer Fatima Mohammadi, who was on the flotilla.  Attendance is free and includes a dinner, and there will be substantial audience participation with a long Q-and-A session.  I think it'll be quite interesting and encourage anyone in the New York area to attend.  More information is here.

UPDATE:  I originally indicated that that the above chart uses the most conservative number of Iraqi civilian deaths because I mistakenly thought it used 100,000 as the number, rather than 1 million.  Thanks to commenter shma for correcting me:  the chart uses 1 million as the number of Iraqi civilian deaths, which puts it at the high end of the estimates.  That doesn't change any of the substantive points at all, but my original statement about the chart's using a conservative estimate was inaccurate.