"The Social Network": Gatsby as a hoodie-wearing geek 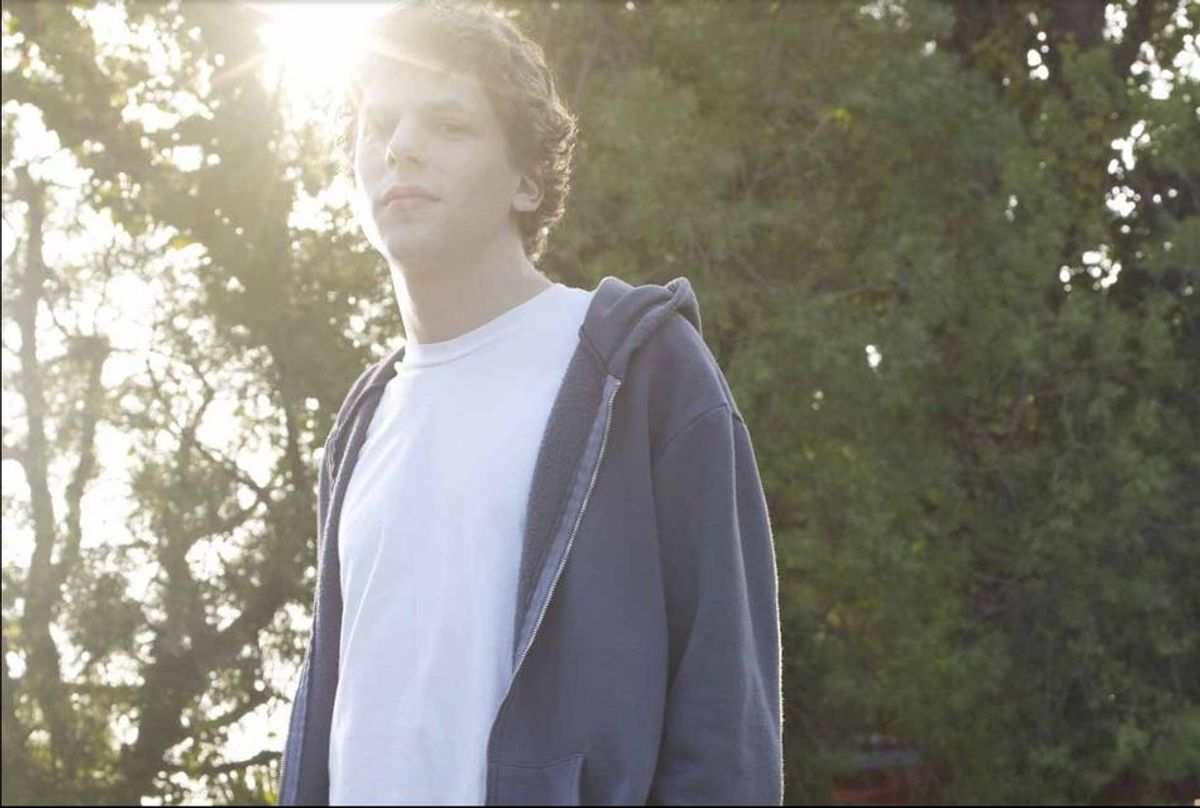 So what is Facebook, exactly? No, no, I know what it is, or I kind of do. That's a philosophical question, one that helps determine your attitude toward director David Fincher and screenwriter Aaron Sorkin's movie "The Social Network" -- a dense, talky and addictive moral fable that depicts Facebook founder Mark Zuckerberg as a 21st-century nerdcore version of Jay Gatsby -- at least before you've seen it. (You're seeing reviews everywhere because "The Social Network" opens the New York Film Festival on Friday night. It opens Oct. 1 in theaters nationwide.)

Is Facebook an interesting innovation built on top of existing technology, one of those things that plays a central social-cultural role for a few years and then fades into the wallpaper of everyday life? Because I don't remember anybody making a movie about the founder of UPS, or whoever invented the consumer VCR. Or does Facebook signify one of those massive Marshall McLuhan shifts in consciousness, where technological change drives a reordering of society, as with the introduction of electric light or the spread of the World Wide Web? (Even there, exciting dramas about Tim Berners-Lee are in short supply. OK, Mickey Rooney and Spencer Tracy played Thomas Edison in two different 1940 films, but I haven't seen them and neither have you.)

Now, you can argue the question either way, but the only real answer is that we can't possibly know the answer yet. We are too close to the history that gets fictionalized in "The Social Network" to grasp its significance, especially in an age when the distinction between the momentous and the ephemeral has evaporated. There's an intriguing Schrödinger's-cat quandary: The very phenomena the film supposedly documents -- the collapse of privacy, the microfracturing of society and the hyper-speed-up of interpersonal relations -- also make the film's events more difficult to understand.

Moreover, we don't go to movies to learn about history, or at least we shouldn't, since the history taught in the movies is even more ludicrous and shot through with present-tense ideology than the history taught in schools. (In this case, Sorkin's screenplay is based on Ben Mezrich's book "The Accidental Billionaires," a quasi-fictional account that tells the story primarily from Facebook co-founder Eduardo Saverin's point of view.) I probably know more about Facebook and the Early Middle Internet Age than I did before I saw "The Social Network," but that stuff isn't the source of the film's appeal. It's an energetic and straightforward work of American pop storytelling, a soapy, gossipy tale of young people behaving badly and class-based infighting at America's most elite university.

No doubt that's for the best. As obsessed as Internet media types and plugged-in movie buffs may be with "The Social Network" -- thanks to the same kind of scientifically calibrated hype machine used to promote "Avatar" and "Inception" -- there's a whole world of people out there who don't know or care about Zuckerberg and the prophetic piece of computer code he wrote during a dorm-room snit-fit one night in 2003. As played by Jesse Eisenberg in the movie, Harvard sophomore Zuckerberg is a thoroughly unpleasant boy-genius who seems to suffer from a combination of tetanus, an autism-spectrum disorder and a slow-acting intestinal poison.

When his girlfriend (Rooney Mara, soon to play Lisbeth Salander in Fincher's version of "The Girl With the Dragon Tattoo") breaks up with him in a zinger-laden opening scene in a Cambridge, Mass., brew pub -- "Going out with you is exhausting! It's like dating a Stairmaster" -- Zuckerberg goes home and blogs about what a bitch she is, like many jilted collegians before and since. Over the ensuing hours, he crafts a site called Facemash, which compares pairs of Harvard women, inviting users to select the hotter of the two. (Zuckerberg raided the online "facebooks," or photo archives, of many Harvard "houses," or dorms. The word has an Ivy League history that long predates the Internet.) Facemash spread across the campus overnight like an airborne STD, crashing Harvard's servers and becoming -- once cleansed of its juvenile misogyny -- the basic template for Zuckerberg's zillion-dollar invention.

Shortly thereafter, Zuckerberg and his Brazilian business partner Saverin (English actor Andrew Garfield, subtle and commanding in a crucial supporting role) launch a Harvard-only social networking site called thefacebook.com, an idea Zuckerberg may or may not have borrowed from Cameron and Tyler Winklevoss, an identical-twin pair of impossibly handsome and well-connected Harvard crew stars. (Both Winklevoss brothers are played by Armie Hammer, at least some of the time.)

As thefacebook loses its definite article and leaps from school to school and finally into the world at large, one-time Napster founder and notorious Internet playboy Sean Parker (Justin Timberlake) comes on board like a Porsche-driving Mephistopheles, carving a fateful gulf between Zuckerberg and Saverin. Zuckerberg drops out of Harvard and moves the whole Facebook operation to Palo Alto, Calif., the brainiac center of Silicon Valley. To any native Northern Californian (such as David Fincher, or me) presenting Palo Alto as a decadent and drugged-out party town seems like an inside joke. But who knows -- maybe it really was like that at Zuckerberg's house.

All I can say about Timberlake's performance as the thoroughly odious, desperately seductive, textbook-case metrosexual Parker is that he brings so much reptilian fun that he unbalances the movie, almost fatally. There's no doubting the intensity and commitment of Eisenberg's role as Zuckerberg, who is depicted here as an undoubted genius with a clear vision of Facebook's identity and potential that no one else shared, but also as a total bummer to be around. Which is kind of weird for the main character in a movie, but points toward what I see as the filmmakers' cultural and generational agenda.

As we already know from Sorkin and Fincher's forward-and-backward, multiple-protagonist structure, all these people wind up suing each other, in various permutations. The results of that litigation aren't terribly important, either in the movie or in real life. Suffice it to say that everyone got paid, although the "Winklevi," as Zuckerberg calls them, got "only" $65 million out of a company that's now believed to be worth many, many billions. (Saverin has been restored to co-founder status and owns a reported 5 percent of Facebook.)

For the creator of "The West Wing" and the director of "Zodiac" and "Fight Club," the characters' competing legal depositions provide a kind of moral reckoning for an old-fashioned, literary-minded yarn about a young man from Nowheresville (the Long Island suburbs, in this case) who conquers the world but risks losing his soul. I'm not disposed to compare "The Social Network" to "Citizen Kane," as some critics have -- that's a way of subtly demeaning both films, and as Sorkin has said, the structure is closer to "All About Eve" or "12 Angry Men." As I've already suggested, this movie is more like a pessimistic, modern-dress reworking of "The Great Gatsby," featuring Garfield's Saverin in the Nick Carraway observer role and transforming the enigmatic, self-constructed dude at the center of the story from a suave ladies' man and party host to a tic-laden, hoodie-wearing introvert who can barely hold a conversation.

Like Gatsby, the Zuckerberg of "The Social Network" is almost pathetically consumed by the Girl Who Got Away, who drove him not just to play a vicious prank on Harvard's female population but also to become the youngest billionaire in history. This feels like a literary device, and from what little I know about the real Zuckerberg, does not entirely ring true. It's difficult not to read "The Social Network" as an indictment of Mark Zuckerberg and, even more so, the era that produced him: This damaged and repellent little guy becomes a fantastic success and a symbol of our age (the film argues) by bulldozing people who seem more normal and sympathetic, including Saverin and the Winklevoss brothers and even the scoundrelly Parker, a villain so bad he wants to be a hero. Against those more palatable examples, we get the Gatsby we deserve.

Furthermore, I detect an element of generational warfare, conscious or not, at work in "The Social Network," which is after all a takedown of the world's richest 26-year-old made by two guys in their late 40s. (Just to be clear, I belong to Sorkin and Fincher's generation, not to Zuckerberg's.) If Zuckerberg ever breaks down and sees this dense, rich and talky picture, he might argue that it fails to capture him because it uses the venerable tools of Western psychological drama to pursue a character who emerged in a different matrix of space and time.

Is "The Social Network" one of the fall season's best big movies? Without question. It's also the subject of one of those feverish social-media marketing campaigns that makes major pop-culture spectacles, sight unseen, carry all kinds of irrelevant Zeitgeisty baggage. I guess the Marxist word for this would be "reification," where movies are seen as metaphysical projections of the collective unconscious instead of internally conflicted products that blend art and commerce, while new masterpieces emerge every few weeks (and are then abandoned) and debate is preempted by a Rotten Tomatoes rating. (At this moment, for this movie, still 100 -- and I assume I've done nothing to change that.) Still, the question remains: Did Mark Zuckerberg create this world, or just figure out how to cash in on it?