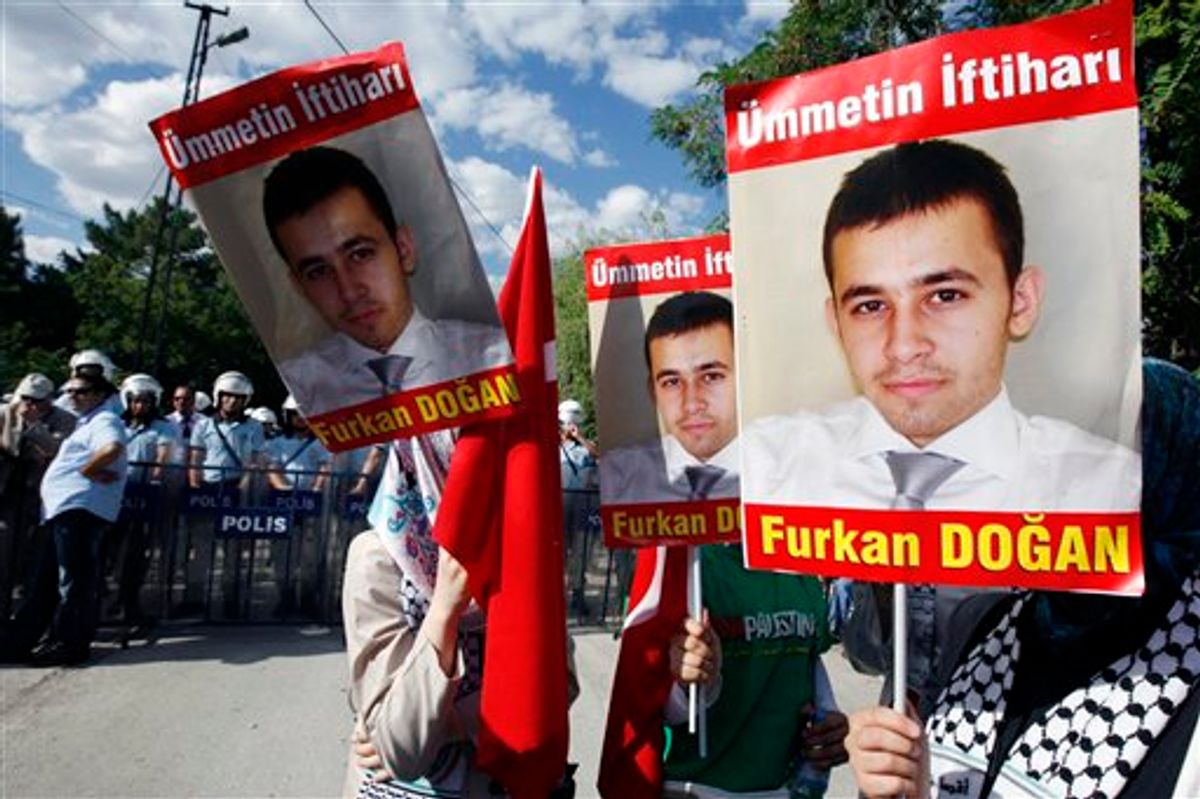 Pro-Palestinian Turks hold posters of Furkan Dogan, the American-Turkish citizen who was born in the U.S. in 1991and one of nine activists killed May 31, 2010, during a pre-dawn military takeover of six aid ships by Israeli forces in the international waters of the Mediterranean Sea, before they clash with riot police as Israeli volleyball team play against Sebia for CEV Women's European League tournament in Ankara, Turkey, Saturday, July 24, 2010. (AP Photo/Burhan Ozbilici) (AP)
--

Last week, the Office of the U.N. High Commissioner for Human Rights released a comprehensive report detailing its findings regarding the May, 2010, Israeli attack on the six-ship flotilla attempting to deliver humanitarian aid to Israel-blockaded Gaza.  The report has been largely ignored in the American media despite the fact (or, more accurately:  because) it found that much of the Israeli force used "was unnecessary, disproportionate, excessive and inappropriate and resulted in the wholly avoidable killing and maiming of a large number of civilian passengers"; that "at least six of the killings can be characterized as extra-legal, arbitrary and summary executions"; and that Israel violated numerous international human rights conventions, including the Fourth Geneva Conventions (see p. 38, para. 172).

Even more striking in terms of U.S. media and government silence on this report is the fact that one of the victims of the worst Israeli violations was a 19-year-old American citizen.  As Gareth Porter documents in an excellent article at The Huffington Post, the report "shows conclusively, for the first time, that US citizen Furkan Dogan and five Turkish citizens were murdered execution-style by Israeli commandos."  In particular:

The report reveals that Dogan, the 19-year-old US citizen of Turkish descent, was filming with a small video camera on the top deck of the Mavi Marmara when he was shot twice in the head, once in the back and in the left leg and foot and that he was shot in the face at point blank range while lying on the ground.

The report says Dogan had apparently been "lying on the deck in a conscious or semi-conscious, state for some time" before being shot in his face.

The forensic evidence that establishes that fact is "tattooing around the wound in his face," indicating that the shot was "delivered at point blank range." The report describes the forensic evidence as showing that "the trajectory of the wound, from bottom to top, together with a vital abrasion to the left shoulder that could be consistent with the bullet exit point, is compatible with the shot being received while he was lying on the ground on his back."

Needless to say, the Israeli Government -- as it virtually always does when confronted with well-documented, official findings of its severe human rights violations -- attacked the source, accusing the report of being "biased and distorted."  The U.N. investigators interviewed 112 witnesses and consulted with numerous forensic and medical experts, while Israel refused to speak with its investigators (though Israeli officials are cooperating with a separate group investigating the attack).  There's no reason to take the findings of this report as Gospel:   like everything, it's subject to reasonable dispute, but it's clearly well-documented, consistent with documentary evidence and overwhelming witness tesitmony, and is entitled to be taken seriously.

To this day, I'm still amazed by how the American media and U.S. Government responded to this incident, given the fact that it was painfully obvious from the start that the Israelis' conduct was the behavior of a guilty party.  The Israelis immediately seized all documentary evidence from the passengers showing what actually happened, blocked all media access to witnesses by detaining everyone on board (including journalists) for days, and then quickly released its own highly edited video -- spliced to begin well into the middle of the Israeli attack -- that was dutifully and unquestioningly shown over and over by the U.S. media to make it appear that the flotilla passengers were the first to become violent.  That was a lie from the start, and it was an obvious lie.

In no other situation would a party to a conflict who steals all of the evidence, withholds it from the world, and then selectively releases its own blatantly distorted, edited version of a fraction of the evidence be trusted.  The opposite is true:  that party would immediately be assumed to be guilty precisely because of that very behavior of obfuscation; that behavior is the behavior of a guilty party.  But with Israel, the opposite happens (at least in the U.S.).  The IDF video was shown over and over to propagnadize Americans into believing that the passengers were the first to engage in aggression, even though the video -- and the Israelis' withholding of all the rest of the evidence -- begged the glaringly obvious question:  what happened before the commandos descended onto the ship?  Based on smuggled video and forensic evidence, this new report documents what countless flotilla witnesses tried to tell the world once they were finally released:  "live ammunition was used from the helicopter onto the top deck prior to the descent of the soldiers" (p. 26; para. 114 -- emphasis added).

Last Wednesday night, I spoke at Brooklyn Law School on this event, and with me on the panel were Columbia University Professor Rashid Khalidi and Iranian-American lawyer Fatima Mohammadi, who was on the Mavi Marmara.  I'm trying very hard to obtain the video of that event because Mohammadi's narration of what happened -- all documented by smuggled video from passengers' cell phones -- leaves little doubt as to who the guilty aggressors were here.  I would really like as many people as possible to hear what she has to say and view the video evidence and make their own assessments as to her credibility and persuasiveness.  Suffice to say, there is no doubt that the Israelis used force against the passengers long before the commandos descended onto the ship -- which is precisely why Israel prevented the world from seeing any evidence showing what happened before the events in the IDF video, and why the U.N. Report so conclusively found Israel at fault.  I'd be willing to venture that a tiny percentage of the American public, whose perceptions were shaped by American media coverage, have any clue that this is the case.

The fact that a 19-year-old American citizen was one of the dead -- among those whom the report concluded was "summarily executed" by the Israelis -- makes the U.S. Government's silence here all the more appalling.  One of the prime duties of a government is to safeguard the welfare of its own citizens.  It's inconceivable for most governments in the world to remain silent in the face of formal findings that a foreign nation "summarily executed" one of its own citizens.  One of the reasons Turkey was so emphatic in its condemnation of Israel was because the dead were Turkish citizens; that's what governments do when a foreign nation kills its own citizens.  Yet not only does the U.S. Government sit silently, but its prior statements defending Israel were disgustingly cavalier.  Virtually the entire world -- literally -- vehemently condemned Israel for what it did here, yet the U.S. refused and continues to refuse to do so, notwithstanding these findings that one of its own citizens was essentially murdered.

Perhaps most illustrative of all is how inconceivable it is to imagine the U.S. Congress doing anything at all in the face of this report . . . . except passing a Resolution condemning the investigators themselves while defending Israeli actions, including the actions that resulted in the death of an American teenager.  Is there any doubt that such a Resolution would pass with overwhelming bipartisan support, approaching unanimity -- as happens each and every time there is a controversy involving Israel?   Thus far, the U.S. media and Government are largely silent about this U.N. Report, but if they are prodded into responding, the response will almost certainly be to condemn the report itself while defending and justifying Israeli actions even in the face of overwhelming evidence as to what really happened here, which managed to emerge despite the Israelis' very telling efforts to keep it suppressed.

In not unrelated news, a new Gallup survey of numerous Middle Eastern and North African nations finds that public opinion of the U.S. and its political leadership has collapsed back to Bush-era levels.  That is consistent with prior polls in the Muslim world finding the same thing.  One of the central, stated goals of the Obama campaign and his presidency was improving how that part of the world perceives of the United States, on the ground that widespread anti-American sentiment is what fuels Terrorism and endangers Americans around the world.  That effort is clearly failing.

UPDATE:  Just to get a sense for how little attention has been paid to the killing of this American teenager by Israel, contrast how much media attention was devoted to mourning the Iranian Government's killing of Neda Agha-Soltan with the attention paid to Dogan.  A NEXIS search for "Neda and Iran" produces this:

A search for "Furkan Dogan" produces this (click image to enlarge):

In terms of attention and coverage, they're not even in the same universe.

UPDATE II:  I neglected to mention that the 47-member U.N. Human Rights Council voted to endorse this report.  The vote was 30 in favor, 15 abstentions, and 1 opposed.  No prizes are available for those who are able to guess the one nation voting against.

UPDATE III:  Mark Leon Goldberg notes that he wrote about the U.N. Report yesterday for U.N. Disptach, as did The Washington Post's Column Lynch, so there was some limited media coverage.