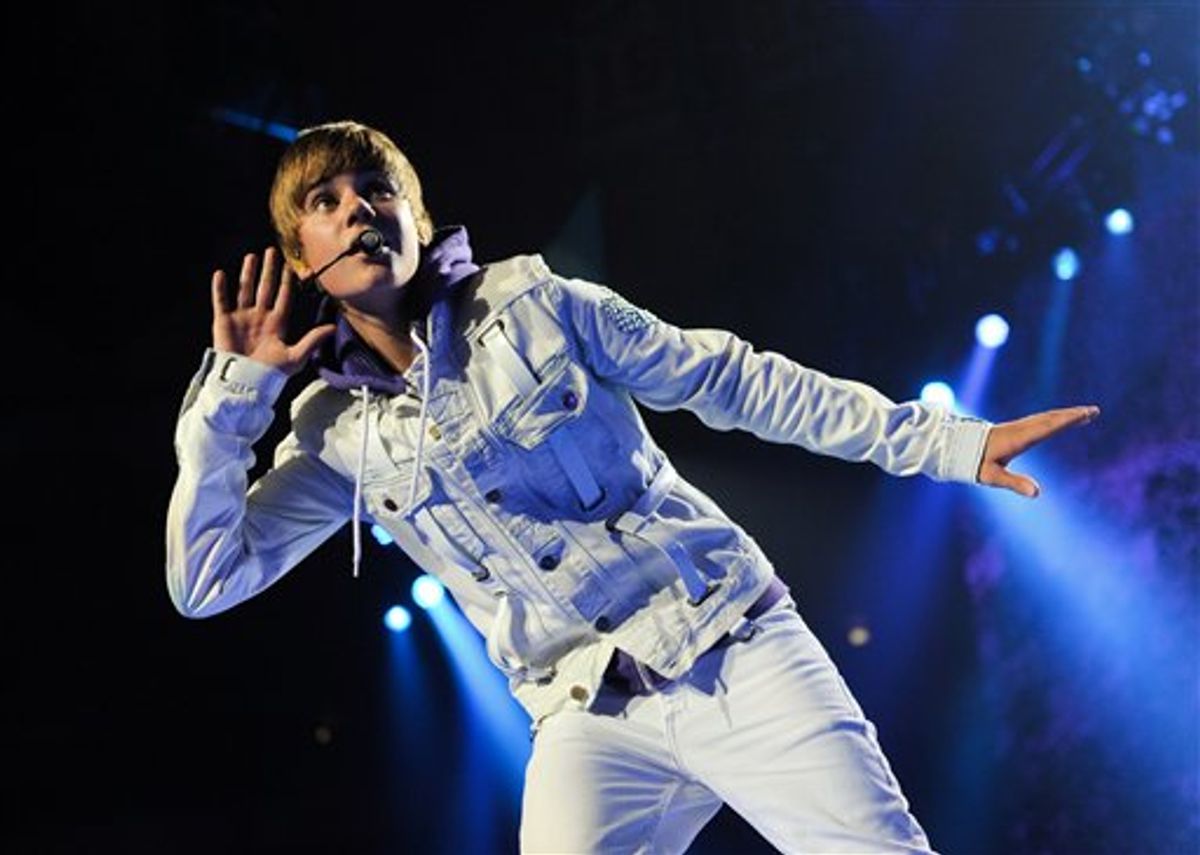 Does MTV really believe Justin Bieber has what it takes to drive Zach Braff into a blind rage? On Tuesday, the industry rumor mill was abuzz with the news that the network was reviving its entertainingly sadistic hidden camera series "Punk'd" with a new star -- the cherubic Justin Bieber.  The "Baby Baby" kid? He's Canadian, for heaven's sake. What can they know of televised cruelty? But don't let those doe eyes fool you -- Justin Bieber is not a young man to be underestimated.

It's not always a blessing to be adored by legions of screaming, whipped-up girls. For every idol who graduates to a long and prosperous career -- your Frank Sinatras, your Beatles -- you'll find a dozen Leif Garretts. One day, you're the toast of New Edition. Thirty years later, you're Bobby Brown. As Rob Sheffield points out in "Talking to Girls About Duran Duran," the boy who is loved by the tweens risks becoming the man who is disdained by the critics. Justin Bieber knows that. Sure, any Tiger Beat cover boy worth his salt will release the inevitable collaborations with rap stars, as Bieber has with Ludacris, but he's got a flair for mixing musical styles and churning out reliably catchy singles to be reckoned with.

But he's more than that. The blow-dried, fresh-faced purveyor of relentless earworms, the 16-year-old zit cream spokesman for whom God created Twitter and riot gear has, in his brief reign as most famous human being on the planet, already displayed a keen instinct for the long haul of fame -- and keeping the girls shrieking while endearing himself to the boys.

When he showed up last month at a West Edmonton Hooters -- and was subsequently photographed surrounded by a bevy of well-endowed ladies -- it was surely not a move calculated to endear himself to his fan base of 8-year-olds. It was a statement that the boy who recently declared he'd like Robert Pattinson to be his wingman likes boobies and hot wings as much as the next guy. He's cheerfully mocked his squeaky clean image in a Funny or Die send-up that had him bragging, gangsta style, that "I talk loudly in libraries, and I swim directly after eating. I don't care." When in August he tweeted the phone number of the teenager who hacked into his friend's Twitter account, it was a stunt worthy of Kutcher himself. And just last month, in a water balloon-related incident at the Maryland State Fair, he pelted two state troopers and then tweeted gleefully about it. Face it, that kid is the devil. Much like another ridiculously cute Justin who a decade ago could have become just another bit of boy band roadkill, Bieber may be considerably more complicated -- and a whole lot funnier and naughtier -- than the little girls can imagine. Or maybe he's just messing with us. Either way, it's a safe bet that Justin Bieber knows exactly what he's doing. And the rest of us had better start sleeping with one eye open.