Ebert attacks my "Secretariat" review -- it's on!

My response to the critic's takedown of my takedown 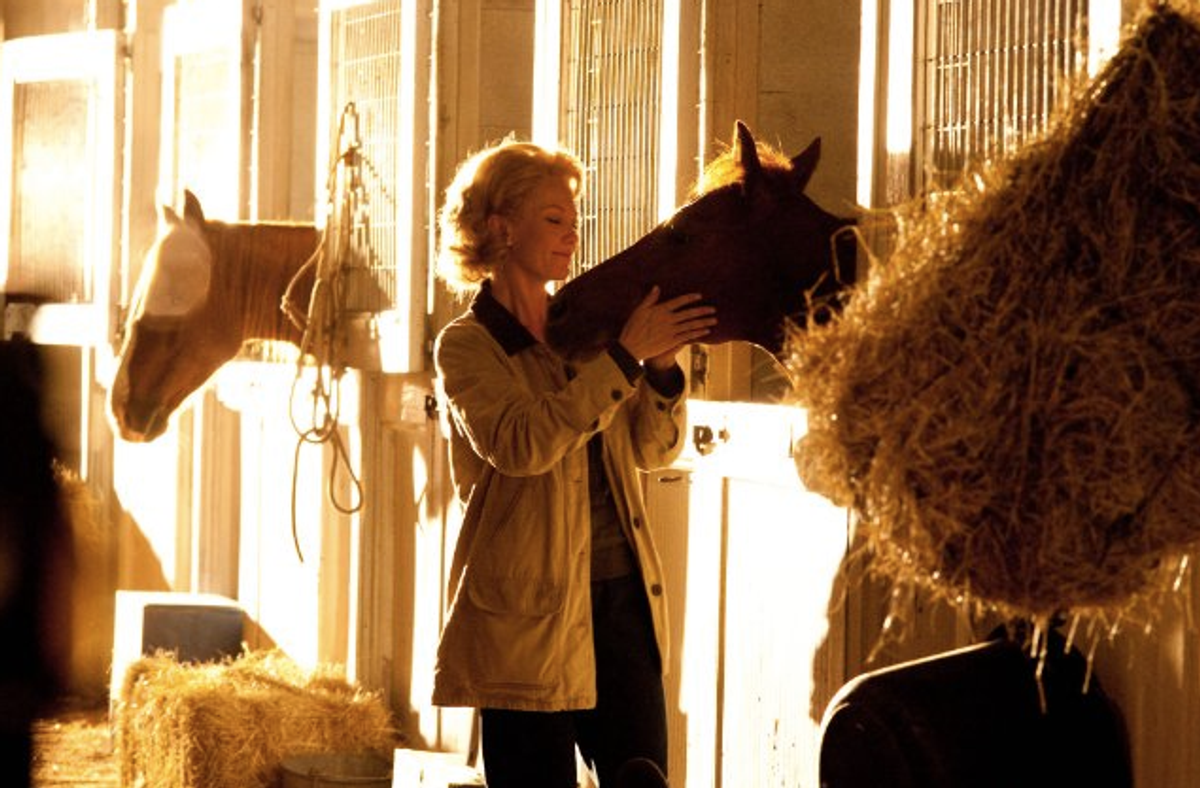 I recently published a review of the new Disney film "Secretariat" that took an unorthodox and admittedly inflammatory approach to a would-be inspirational movie about a lady and a racehorse. Nearly all viewers will choose to see or not see the movie based on their level of interest in watching Diane Lane in an awesome array of early-'70s fashions, or watching exciting re-creations of the 1973 Triple Crown races. I accused the film of concealing -- or embodying, that's a better word -- an ideological worldview that is never made explicit but is present in every frame.

I don't claim the review makes its case with perfect clarity, and I didn't expect many people to agree completely. Being forcefully told that you're full of crap goes with the job description, especially in an inherently subjective endeavor like movie criticism. I was gratified that a lot of people read the review, and e-mailed or Tweeted it onward -- and was somewhere between flattered and startled that Roger Ebert posted a lengthy takedown of my review on his Chicago Sun-Times blog. Like almost everyone in this insular field, I venerate Roger as a passionate movie lover, a generous spirit, and an old-school journalist who has made the transition to new media and now pretty much owns the joint.

I thought Roger's response was worth a response of my own, partly because I think he's misreading or misinterpreting me, but mostly because I think the cultural gulf between our understandings of "Secretariat" offers a fascinating opportunity to talk about all kinds of stuff film critics don't generally discuss: the nature and meaning of propaganda, the ideology (or lack thereof) of Hollywood movies, the role of religion in public discourse and maybe the gap between idealism and cynicism when considering movies, or the world. (Actually, activists and commentators on the right are way ahead of us: They talk about this stuff all the time, and have compelled Hollywood to understand that there's enormous demand for a movie like "Secretariat.")

UPDATE: I also posted this to Roger's blog, where he has responded. Scroll to the bottom of the page to read that.

I'm not eager to get into a public dispute with you over a Disney movie that you found "straightforward" and "lovingly crafted" and I found weird, fake and inexplicably disturbing, which may be all this boils down to. The world isn't likely to care much, and will render its verdict without our help.

I appreciate that you opened and closed this piece with some kind words, and I have great respect for you as a man and a critic. That said, I think the only place where we agree here is when you say, "O'Hehir's reading [of 'Secretariat'] is wildly eccentric." I'll cop to that happily -- my review of the film was willfully hyperbolic, even outrageous, in hopes of getting people to look at a formulaic Disney sports movie through fresh eyes. I know I don't have to explain the function or uses of hyperbole to you, since it's a technique you often employ (here and elsewhere). My hyperbole in the "Secretariat" review was supposed to be funny, and also to provoke a response. I appear to have succeeded brilliantly with the second part! The results on "funny" are more mixed.

Now, clearly I could have written a more "normal" review, in which I said something like: "Secretariat" was kind of fun to watch, but it bugged me. It presents a prettied-up, phony-baloney vision of America in the early '70s, in a transparent effort to appeal to the "family-values" crowd who ate up "The Blind Side" -- people who want a comforting and unchallenging movie without any sex or swearing. There's nothing wrong with that as a way to make a buck, but this example is ultra-tame, scrubbed clean of any genuine conflict or drama, and I pretty much think it's crap.

Now, I gather you would have disagreed with that, and pretty sharply, but I very much doubt you'd have bothered writing several thousand words ripping me apart. Now perhaps you see the genius of my plan!

Seriously, that is what I think -- and pretty much what I said, albeit in somewhat stronger language. In your haste to take me down, I think you frequently read my gag lines as being deadly serious, mix or conflate different aspects of my argument (e.g., I don't say or think anything about the horse being evil, or representing evil), and confuse events in real life with what we see in the film.

Now then: I do indeed compare "Secretariat" to "master-race propaganda almost worthy of Leni Riefenstahl," a deliberately outrageous claim that, I suspect, pissed you off right at the outset. Let me elaborate a little. In my view, the most effective propaganda movies are not the ones about dudes with guns that espouse militarism, or the Soviet boy-meets-tractor films, or the Nazi cartoons about Jews. Those are too obvious. The most effective kind of propaganda depicts normal life, or rather an idealized vision of normal life, one that (as one of my readers put it) "makes a particular worldview seem natural, right and appealing." Viewed that way, of course, a very large proportion of Hollywood movies could be considered propaganda, which is a subject for another time. (The shoe may fit.)

Of course it's offensive to compare a contemporary filmmaker to Riefenstahl -- although she was unquestionably a great director -- but I never said or suggested that Randall Wallace had consciously or deliberately created a film whose primary purpose was ideological. It's more like the ideology of reassurance and comfort and gorgeous images -- what I refer to as the "fantasia of American whiteness and power," which is, yes, going kind of far -- is so built into this kind of movie you can't get it out. I do, however, see Wallace's desire to appeal to Christian audiences and a never-enumerated set of "middle-American values" as politically coded, at least to some degree. (Or rather, it's coded if you want it to be; of course he's happy with secular left-wing types watching the movie too.)

You believe, or suggest, that I damn the film for not noticing Vietnam or Watergate, but that isn't quite right. As I think I make clear, I was struck by the oddness of the film's idealized, "Ozzie and Harriet" portrait of American life, which feels more like the '50s, being set in one of the most tumultuous periods of American history. That's a suggestive fact, an element of the overall picture, not an indictment. You indulge in some hyperbole of your own in suggesting that I accuse Penny Chenery (the movie character? the real person? I am not sure) of being an evil right-winger, when I never say, and do not know, anything about her politics. Watch out for the "O'Hehirian Riefenstahlian TeaPartyite" clique, though --we're on the rise!

I could go on, and I guess I will just a little: I never say or suggest that anyone considered the Triple Crown victories "as a demonstration of white superiority." (I honestly don't believe you don't get the "Nietzschean Überhorse" joke. Secretariat was a product of eugenics if any living creature ever was.) You suggest that I attack Randall Wallace for his religious faith, but I do not, and you cite nothing to support this. You say that I see "a repository of Christianity (of the wrong sort, presumably)" in the film, when I say clearly that religion plays almost no role in the story. On the other hand, it's simply a fact that Disney is marketing the film to Christian conservatives, and neither of us is required to have an opinion about it. And I'm not sure what you mean when you say you refuse to allow me to define the film as "Tea Party-friendly." Is Sarah Palin not allowed to like it?

On the film's racial issues: You suggest that I am demeaning the real-life Eddie Sweat, Secretariat's groom. I say nothing about Eddie Sweat. I am discussing a fictional character, the only black person ever seen in the film, who is presented as subordinate, unreflective, constantly cheerful and uniquely well equipped to communicate with an animal. Could there be such a person? Of course. But in the context of my perception of the film's total universe, this feels like an unwholesome and old-fashioned stereotype (for which there is a borderline-offensive name I will not use).

Similarly, I have a tough time believing you don't get what I'm trying to say about the Pancho Martin character. Those who reported on the Triple Crown at the time have said that the real Pancho Martin was neither talkative nor boastful, and had no particular adversarial relationship with Penny Chenery. That stuff we saw in the movie did not happen. But the filmmakers have taken the one faintly "ethnic" or non-American character in the movie, and made him thoroughly despicable. What was that? An accident? An aesthetic choice? Or a lazy and coded shortcut?

For me, all in all, "Secretariat" adds up to something that looks pretty but tastes pretty bad, and apparently I expressed that view with a degree of force you found "insane." Frankly, I wish you had avoided those kinds of epithets, and focused more on areas where we may have real differences of philosophical or political or aesthetic opinion and interpretation to discuss. I'm inclined to believe that you understood my argument well enough -- better than you claim to, at least -- but that it pissed you off so much you just didn't want to deal with it. But that's only a theory, and I assure you that my faith in Roger Ebert remains. Generally speaking.

UPDATE: Ebert's response, just posted on his Sun-Times blog, is typically concise and gracious, and comes with a zinger or two:

Thanks for responding. I understand your points, and have had similar thoughts of my own about some films. But you're correct: I didn't read it as satire, maybe because I've been softened up by so many similar Armond White reviews that he (apparently) writes seriously.

We can agree perhaps on one thing: Your review helps us define what Rotten Tomatoes considers "positive."