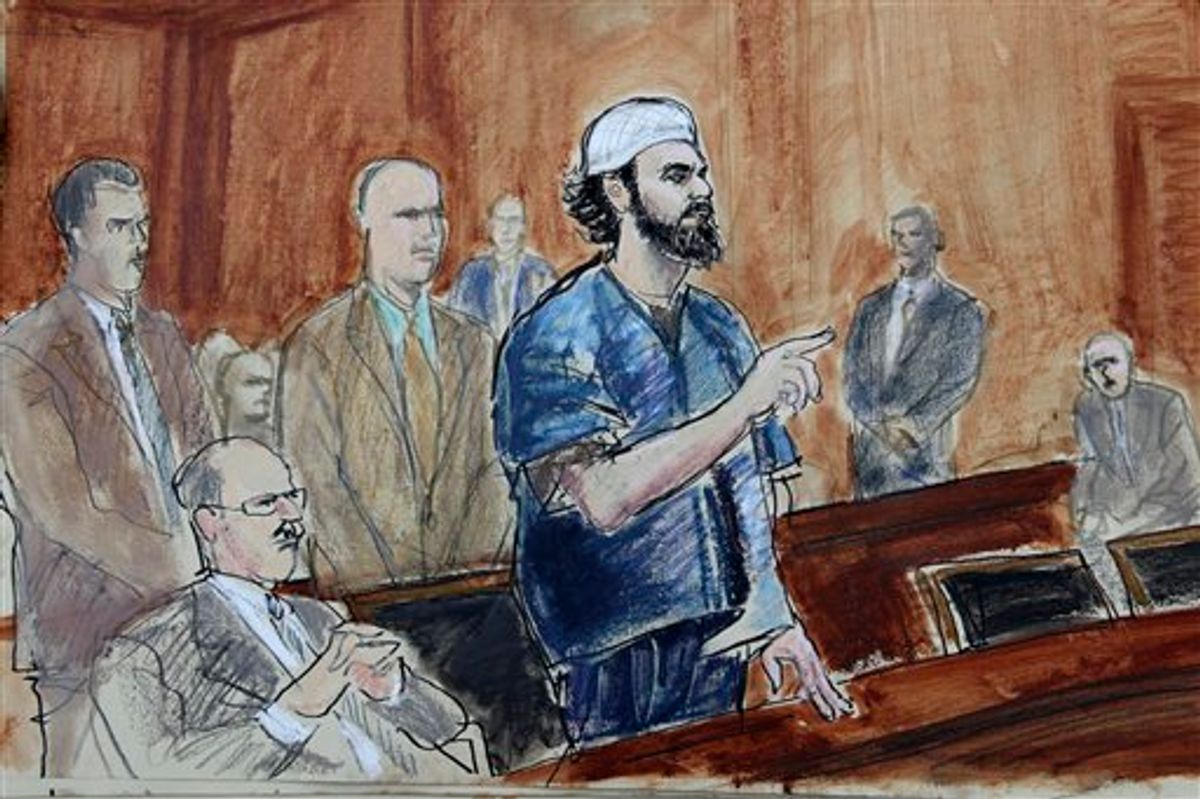 This courtroom sketch made Tuesday, Oct. 5, 2010 shows Faisal Shahzad, center, surrounded by U.S. Marshals and accompanied by his attorney Philip Weinstein, left, during his sentencing in Manhattan Federal court in New York. The Pakistani immigrant who tried to set off a car bomb in Times Square in May 2010 was sentenced Tuesday to life in prison. (AP Photo/Elizabeth Williams) (AP)
--

Liz Cheney, daughter of former Vice President Cheney and founder of the Keep America Safe PAC, claimed on Fox News last night that holding terrorism trials in New York "endangers the United States" and brings the country "back to a pre-9/11 mentality" . . . .

She also hinted that civilian trials would lead to more terrorist attacks.

Not one, not two, but three terrorism cases weaved their way simultaneously this week through the federal courthouse in Lower Manhattan. . . .

The courthouse, on Pearl Street off Foley Square, has become "the cineplex of terrorism trials," said Karen J. Greenberg, executive director of the Center on Law and Security at New York University. Her words may have been mildly flippant, but her point could not have been more serious.

Here we have all these cases unfolding in the civic heart of New York -- people accused or convicted of loathsome deeds involving mass murder, whether planned or carried out. Not only have the proceedings been handled within the rule of law, but also New Yorkers went about their business without so much as a raised eyebrow.

What's most striking is how we collectively never learn lessons.  These are the same people who ran around screaming for two years that we had to attack Iraq or else Saddam would get us all with his mad chemical scientists (Dr. Anthrax and Mrs. Germ) and nuclear clouds, yet they are still listened to whenever they unleash their newest Scary Villains.  Fear is a potent weapon.

Speaking of fear-mongering, The Guardian today has an article with this headline:  "Barack Obama accused of exaggerating terror threat for political gain."  It quotes numerous Pakistani and European officials as arguing that the Obama administration's travel advisory this week for Europe -- and its accompanying claim about ongoing plots aimed at Germany and France -- "was politically motivated and not based on credible new information."  In particular, these sources asserted that the alert "was an attempt to justify a recent escalation in US drone and helicopter attacks inside Pakistan"; was influenced by the imminent elections; and, most of all, that "President Obama was reacting to pressure to demonstrate that his Afghan war strategy and this year's troop surge, which are unpopular with the American public, were necessary."

I wasn't particularly impressed with the reporting here:   Pakistani officials always downplay the Terrorism threat coming from their country and the European officials cited in this article are largely (though not exclusively) anonymous.  But then I saw this Associated Press article this morning:

An al-Qaida-linked plot that triggered this week's U.S. terror alert for Europe underlines the need for the war in Afghanistan, a top NATO commander argued Friday.

U.S. Adm. James Stavridis, NATO's top commander in Europe, said terrorists using Afghanistan as a base are still trying to target Europe and that this threat justifies a war that has grown unpopular in many places.

This doesn't at all prove that the terror alert was designed to justify the war by spreading fear, but military officials wasted no time seizing on the alert for that purpose.  That is essentially how America is governed:  constantly ensure that Americans are petrified of an always-changing, always-expanding cast of Horribles so that they submit to whatever policies -- wars -- are alleged to be devoted to eradicating those threats.  There isn't much attention paid to what happens to a citizenry that is kept in a constant state of increasing fear, but there should be, because the way that degrades a nation's character can't be overstated.

(1) Here's an excellent 2-minute video of what is actually happening in New York as Terrorist trials proceed, in contrast to the swamp of fear-mongering to which we have been relentlessly subjected (h/t Daphne Eviatar):

(2) As I indicated, the media led the way in War on Terror fear-mongering with articles like the one from CNN linked above, touting the scary Iraqis Villains "Dr. Germ and Mrs. Anthrax."  But perhaps the nadir of that fear-mongering was the media's fixation on the Most Wanted Iraqis deck of playing cards, which they touted endlessly.  Today, Marc Lynch pointed me to something amazing that I had never seen before:  watch this YouTube video from an Al Jazeera documentary on the media's coverage of the Iraq War, beginning at the 4:50 mark, as the U.S. military introduces the playing deck and media figures become instantly desperate to get their own copies and then dutifully march forward to promote them.  It's really quite something.

(3) ProPublica's Dafna Linzer has a very worthwhile exposé on one of the detainees the Obama administration is attempting to indefinitely imprison without any charges (no trial or even military commission).  Using inadvertently disclosed information, she compellingly documents how dubious the case against him is.

(4) Chris Floyd has an important essay on several complex issues, including some discussed here.  Without endorsing all of it, I highly recommend it.

UPDATE II:  I linked in the prior update to a clip from Control Room, the 2004 Al Jazeera documentary about media coverage and the Iraq War.  Despite how highly regarded it is, I was actually unaware of this film until Marc Lynch mentioned it to me today, and having now watched all of it, I can't recommend it highly enough.  The fact that it was produced in only the second year of the war makes it all the more extraordinary.  You can watch the entire film on YouTube, in 9 parts, beginning here (each successive part appears in the right-hand column on YouTube).