When is it wrong to call something "gay"? 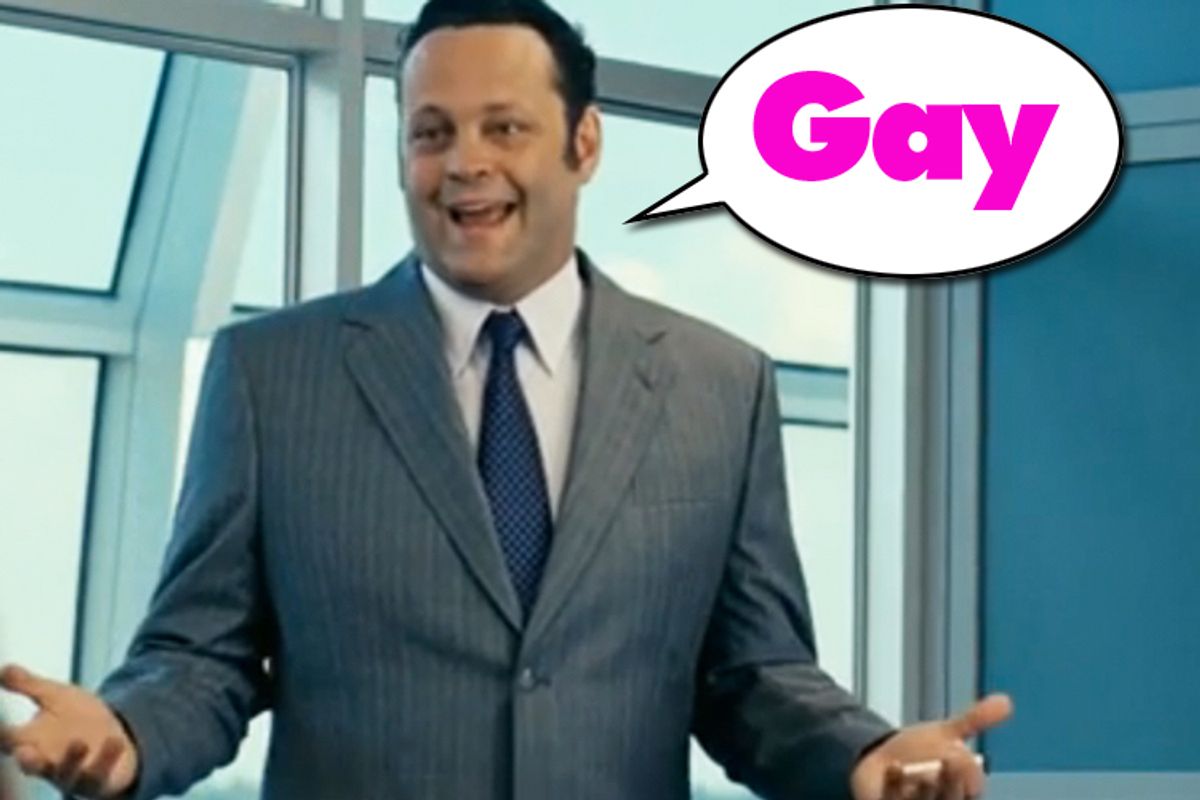 Maybe this wasn't the best week to roll out the lighthearted gay jokes. In the wake of a devastating spate of teen suicides, notably that of 18-year-old Rutgers freshman Tyler Clementi in September, issues of anti-gay harassment and bullying have become front-page news. Every day, in school halls across America, kids are hurling words like "fag" and "dyke" to put other kids down.

So when Anderson Cooper, ever the moral compass of the nation's soul, went on "Ellen" last week to discuss the the "lack of empathy" fueling the fire, he directly addressed the power of words to sting. "If a kid in the classroom uses the N-word, a teacher will discipline that child ... A teacher will hear the F-word thrown around and do nothing about it," he told Ellen. "I was sitting in a movie theater and there was a preview, and in it the actor said, 'That's so gay.' I was shocked that they put that in the preview. They thought that was OK ... We've got to do something to make those words unacceptable, because those words are hurting kids."

Though he didn't name it, it was clear the movie Cooper was referring to was the forthcoming Ron Howard comedy, "The Dilemma." In the preview Cooper saw, which Universal hastily recut over the weekend, Vince Vaughn sets the tone for his super-butch character by telling a roomful of executives, "Electric cars are gay. Not homosexual gay, but my-parents-are-chaperoning-the-dance gay." He then makes a pitch for a new model that brings "rock and rollness" -- complete with air guitar solo -- to automotive design.

Is the gag, similar in spirit to the Seth Rogen-Paul Rudd "You know how I know you're gay?" exchange in "The 40 Year Old Virgin," homophobic? Only as much as parents chaperoning a dance is homophobic. In the clip, it seems clear the line is meant as an example of Vaughn's -- and the auto industry's -- tone-deaf machismo. That point is further brought home when, in the next scene, Queen Latifah tells Vaughn his speech gave her "lady wood."

Last time I checked, cars are not gay, and women don't get wood. Cooper's point about using "gay" as a casual dis is nonetheless worth noting, but the politics of the term get complicated when you factor in the subtleties of human interaction. A person using "That's so gay" as a putdown turns "gay," a word freely and often positively bandied about, into a slur. It muddies up the issue of whether it's ever, under any circumstances, OK to call anything so gay -- even if, like a Margaret Cho dance routine, it totally is. And questions regarding same-sex oriented words don't end there. How do you solve a problem like "queer"? Queer Nation. "Queer Eye for the Straight Guy." "Queer as Folk." All generally considered acceptable. But to say, "Dan is queer," can be either a simple declaration or a scathing insult depending on who's saying it.

Cooper's own skittishness around the issues of language seem at once both genuinely compassionate and oddly awkward. Can a man who is so intensely private about his own personal life really lecture society about how to use words? The way we speak among our own tribes, after all, is different from what we'll permit from others, and our personal stake in words matters. If a lesbian friend wants to rag on her "dyke haircut" I yield the floor -- and hold my tongue. Maybe that's why I found it odd when Cooper, who coyly referred to either that three- or six-lettered "F-word" on "Ellen" (Is there a difference? Is the longer version more hurtful?) didn't trip his tongue over "bitch" in his Sunday interview with Eminem. Mr. Cooper, your selective umbrage is showing.

As we in the East Coast liberal elite celebrate National Coming Out Day by brainwashing our children "into thinking that homosexuality is an equally valid or successful option," it's clear many of us, gay and straight, are still wrangling with our criteria for what's acceptable, what's parody and what's hurtful. Is Vince Vaughn's character really making a joke about the wussiness of a car, or is the joke about his own stupidity? Is that Robot Unicorn app, the one with the Erasure song, wicked queer or what?

On an early episode of "Louie," the comic and his friends, including a gay man, talk over the poker table about the word "faggot," a scene that's rich in historical context, humor, camaraderie -- and most of all, pure openeness. Vulgar as the banter is, it's a fine example of basic courtesy, because if you want to know if what you're saying is offensive, you shouldn't wait for Anderson Cooper to tell you. Ask a friend. As kids across the country are dying over words, I don't want my daughters to grow up thinking that "gay" means bad or negative or weak or silly. And my own bottom line is generally that if I can avoid hurting another human being, I have enough other words in my vocabulary that I can leave a few out.