The British artist's Fox-bashing credit sequence goes viral. Do we all just love hating our bosses? 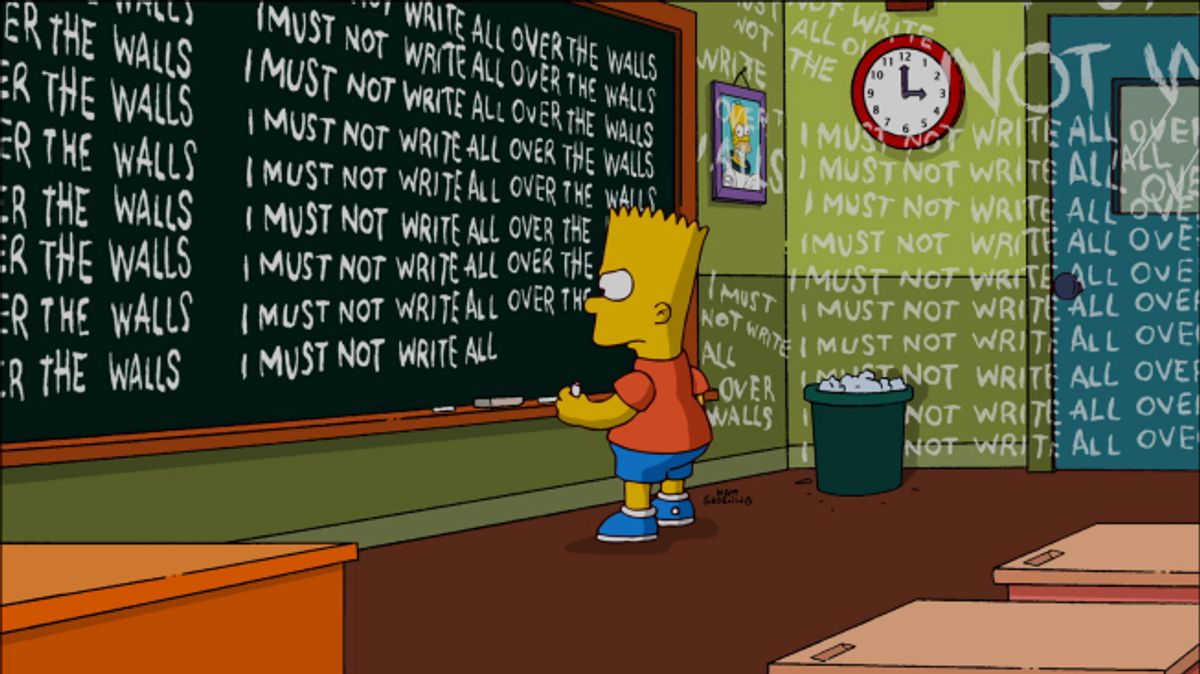 When "The Simpsons" stunned viewers Sunday night with an opening titles sequence created by the elusive, infamous Banksy, it was the unlikeliest pairing of pop culture, art and cultural criticism until the Kim Kardashian-Barbara Kruger cover of W magazine hit newsstands two days later.

The clip, easily one of the darkest, most despairing piece of animation to come down the pike since "Grave of the Fireflies," kicks off with a bird carrying a dead rodent through the Springfield skies – and then it turns grim. Sure, the theme music and the sequence of events stays true to the show's familiar themes – Bart cheekily writes "I must not write all over the walls" on the chalkboard, a Krusty billboard gets a little Banksied – but as the family takes its place on the couch, the action pulls away to an Asian animation sweatshop. How hellish is Banksy's vision of how "The Simpsons" gets made? It makes a real sweatshop look like Club Med. Children dip animation cels in toxic waste while rats carry off human bones. Kittens are wood-chippered into Bart Simpson dolls, hauled off by tragic pandas. And do you even want to know how they put the holes in your DVDs? Chained up unicorns.

It's a stunning indictment of harsh international working conditions and animal cruelty, a provocative statement on the  show's reputed practice of outsourcing its animation to South Korea, and the most effective ad for Klonopin ever created. That the sequence would go viral faster than a case of mono on a Flava Flav-themed reality show was never in doubt. And sure enough, by Monday, if you didn't have a friend who had forwarded you the clip, you likely just didn't have a friend.

What's truly extraordinary about the sequence -- aside from its unyielding horror -- is the level of public relations panic Fox must surely have to swallow to permit its own image to be depicted quite literally surrounded by barbed wire. Speaking to Dave Itzkoff in the New York Times Monday, Simpsons executive producer Al Jean said that they made a few changes to Banksy's "even a little sadder" original vision, but that the network, which must by now be at least a little dead inside from the show's ongoing jibes, gave its blessing to the stunt.

It's a bold move to the let one's own troops fire upon oneself. But what would entertainment be without the master taking on a bit of public whipping from the servant? Conan O'Brien's "Tonight Show" came to vicious life when the host's "toxic" relationship with NBC became grist for his late-night barbs – just as David Letterman's show did likewise in its waning Peacock network era. Anybody can make a talk show. Saying you're putting that talk show up for sale on Craigslist takes a special kind of awesome. Similarly, is "30 Rock" ever better than when it's taking potshots from within the belly of the beast, imagining a network strategy of "reality content made exclusively for your mobile phone" that doesn’t sound all that different from GE's own "diversification strategy that includes aggressive cable acquisition, global expansion, investment in film, and the development of innovative digital distribution." And if Geffen hadn't told Weezer to give them something a little more commercial, we'd be living now in a world without the bird-flipping delight of their reply, "Pork and Beans."

Despite the numerous compromises artists make along the road to commercial appeal, the strange wonder of Banksy's collaboration with "The Simpsons" – and by extension, Fox – is a reminder that envelopes are made to be pushed. And sometimes, somewhere in the highly charged space between the outpouring of creativity and the opening of purse strings, something tense and strange and fascinating emerges. And it looks like a chained up unicorn.