Media outlets begin criticizing them for their vanity and supposed adultery. Why do we love tearing down heroes? 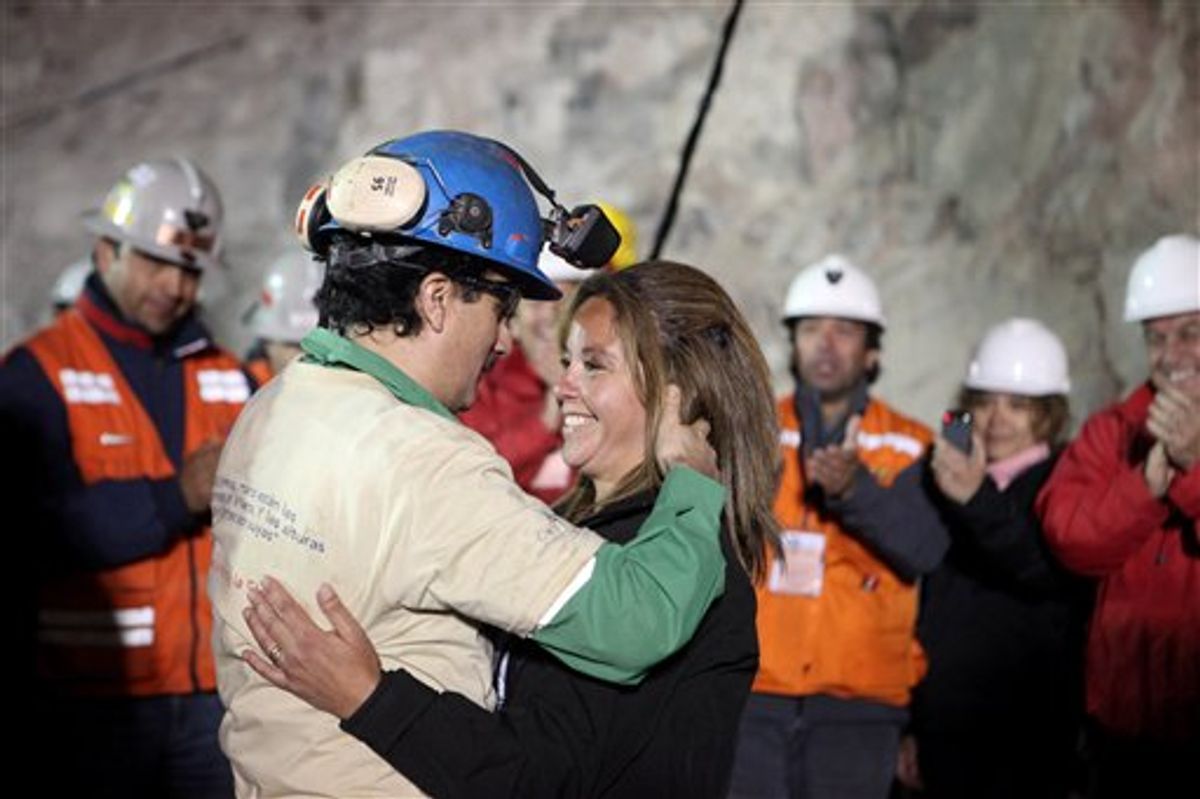 In this photo released by the Chilean government, miner Raul Bustos, left, embraces an unidentified woman after after being rescued from the collapsed San Jose gold and copper mine where he had been trapped with 32 other miners for over two months near Copiapo, Chile, Wednesday Oct. 13, 2010. (AP Photo/Chilean Government, Hugo Infante) (AP)
--

Well it's been a whole day now. Time to start ragging on the Chilean miners.

After 69 days trapped underground in a confined space with no sunlight, limited resources and no new episodes of "Mad Men," the 33 men whose astonishing story of survival and solidarity captivated the world emerged Wednesday to face a rapturous public, pissed-off wives and a press hungry for a new and sexy angle to cover. By evening, the whole triumph of the human spirit thing had taken a backseat to minerfreude, as outlets like the New York Post were reporting on the "two-timing miner Yonni Barrios," who was greeted outside the mine not by his wife of 28 years but by his joyous mistress. And when the Daily Mail reported that Barrios's wife "reportedly almost came to blows" with his lady friend while they were both keeping vigil -- and that she called him "crazy and cocky" to think she'd show up for his rescue -- bOING bOING and the Daily News inevitably spun the story out as a tale of "cat fighting." Suddenly, we're in a scene where Salma Hayek and Penelope Cruz are pulling each others' hair.

And keep rubbing your palms in glee, media spectators, because Chilean miners apparently get more booty than a whole crew of Somali pirates. Barrios, who will obviously be played by Javier Bardem in the erotic thriller to come out of this, was likely not the only man from the shaft who got around a bit before his world caved in. As lucrative offers of worker's compensation and media opportunities have flooded in over the past few weeks, a variety of women -- many of whom seem not to have known of each other's existences -- have swarmed to the outpost known as Camp Hope. Red Cross worker Marta Flores told the UK Telegraph last month, "Some of the men have children from numerous women, and all of them have arrived here to stake their claim. I've met five families in this situation, but I'm sure there are more." So good luck to the unnamed miner who reportedly has "a first wife he never divorced, his live-in partner, a mother of a child he had several years ago, and a woman who claims to be his current girlfriend" -- and don't expect to stay anonymous for long.

The men, who while still trapped underground worked out agreements on how to share the proceeds from their story and took teleconferenced classes on dealing with the media now face both the perks and the pitfalls of instant fame. This week, as the eyes of the world were on each of them as they blinked into the daylight for the first time in over two months, speculation ran high over what they would say and how did they look. And hey, didn't they look a little too good or what? Astute observers were quick to note how relatively healthy and unstubbled they appeared. The clean-shaven miners, who had been receiving basic provisions like soap and toothpaste for weeks before their rescue, were, in the words of the Daily Beast's Constantino Diaz-Duran, "looking fabulous." Come to think of it, their "almost dashing" appearance in "their wraparound sunglasses" was "a clear example of how the power of human vanity can be as strong as our will to live." Yes, the sunglasses and shaves were all about vanity. That, and the fact that hygiene is full of very humanizing ritual, and the men's eyes hadn't been exposed to daylight in almost 70 days.

On an early August day, 33 miners went off to work as regular men. Men with wives, girlfriends, and wives and girlfriends. Today they're heroes, survivors and celebrities. So it's no wonder -- and it's pretty funny -- that "the Daily Show" has already dubbed the flamboyant, fist-pumping miner Mario Sepúlveda as "the Chilean Situation." Maybe in the relief of dramatic rescue, there's a reflective cultural need to keep survivors mortal, and a sweet release in being able to find things to laugh about in a story that could have been so disastrous. These guys don't need to be put on a pedestal. But maybe anyone who's spent almost 70 days half a mile below the earth doesn't immediately need to be taken down a peg either.