The actor's new collection, "Palo Alto," shows promise -- and an undeveloped obsession with youth and violence 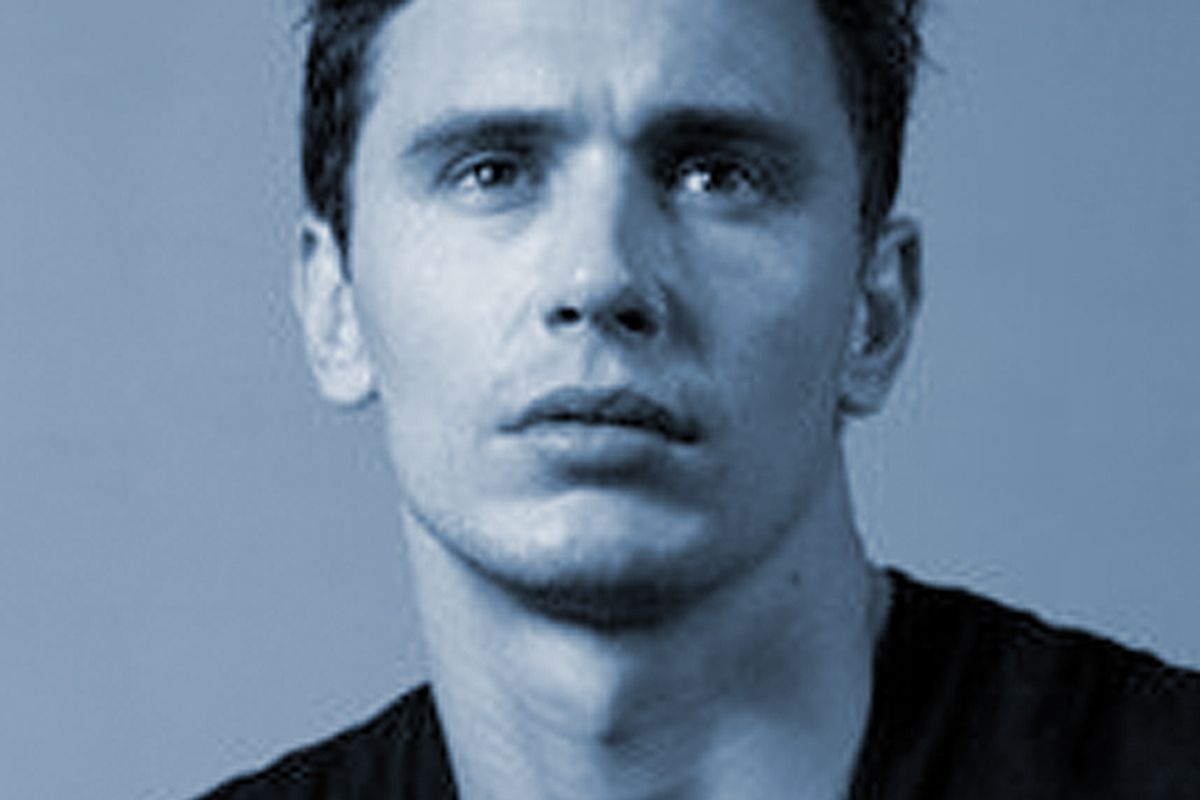 In the old days, by which I mean last week, no one expected an author to look hot. If you had bathed within the last lunar cycle, if your body compared favorably with Winston Churchill's, if your eyes, nose and mouth were all in roughly approximate position, you got a pass. An affirmative-action, hey-he-shaved-and-brushed-his-teeth pass.

Now who should come along to screw it up but James Franco, whose short-story collection, "Palo Alto," comes with an author pic so ridiculously dreamy, so full-lipped and chin-carved and chestnut-haired that I'm already wondering how I can scan it into my next book jacket. "Yes," I imagine responding to e-mail queries. "That's exactly what I look like. Which is why I don't do public appearances anymore. The fans get so damn grabby."

Envy, then, is a prime consideration in confronting Franco the Writer. It's not enough that he should be Salon's Sexiest Man Living of 2009. Or an artist with a solo exhibition in Tribeca. Or an extremely well-compensated and (when occasion demands) competent movie actor. Nooo, James Franco is now making a play for the New York Times Book Review and the monthly Book Sense list and the Barnes & Noble 100 and all those places where homely, unsocialized men and women once held sway.

Snark is the default response but not, I am sad to say, the honest one. Because to the question of "Can James Franco write?", the short answer is yes. And so is the long answer, but with the qualification that a writer's subject is as important as his method and that, having dwelt so lovingly and hatefully on his boyhood, James Franco may now be advised to leave it behind.

"Palo Alto" is a suite of interconnected stories built around the tumult of coming of age, as Franco did, in Palo Alto, Calif., in the early 1990s. (We know how far we've gone back because of the strategically inserted signifiers: Guns N' Roses, "Schindler's List," Gulf War.) These aren't the dead-end working-class kids of Springsteen's discography but kids of privilege, living in the precincts of Stanford and Lockheed Martin, smart enough to drop literary allusions but shooting blanks when it comes to ambition. White or Hispanic or mixed-race, they shun black company but worship black music, and they smoke and get stoned and drink their parents' whiskey and vodka, and the boys call each other "bitch" and "faggot" and compete to see who can have sex with the most girls.

They're lonely kids, bored and angry -- "I hate everything," declares one -- and their feelings get "computed in strange ways," with the end product usually being cruelty. Is there any eye more merciless than a teenager's? "She walked crookedly and had a funny-shaped ass, like a heptagon ... His shorts hung to his fat knees and he had them in all ugly colors … Her face was like her ass, flat and wide. Her cheeks stuck out farther than her temples and they hung like the jowls of a St. Bernard."

And when mere cruelty falls short, putting the hurt on someone is the next best bet. Violence is, in fact, the blood-seed from which each of Franco's stories blossoms forth. One boy runs his grandfather's car into a wall; another plots to assassinate the football player who assaulted him; another is savagely beaten over a Civil War assignment. A girl's brief flirtation with a handsome teenager ends when he is drawn into a gang fight. Teddy defaces library books; Ryan runs over a librarian. Bone meets bone, ennui erupts into mayhem, and when you come to a story titled "Killing Animals," you can be certain it's not a metaphor.

In "Palo Alto," destruction is the only way kids can make connections, their only chance to feel alive. Victim and victimizer find a bloody transcendence. "I kicked Sam in the shin and he fell to the ground holding his leg. I felt awesome … He roared like a boar, long and angry, and then he started stomping on my ribs. Quick, hard stomps. My ribs bent, and my lungs were jolted, and there was a sucking-in sound. I stayed rolled up and he stomped me."

Read between the lines, and you'll be able to pick out Franco's influences: Raymond Carver's tight-lipped stoicism; the sun-streaked disaffection of "Less than Zero"; a grueling gang-bang sequence that harkens straight back to Hubert Selby Jr.'s "Last Exit to Brooklyn." It's a heavy freight of angst, all told, so one is grateful for the periodic flashes of humor, which come usually at the expense of some adult. The high-school history teacher, for example, who recreates the Anne Frank story on top of the machine shop in the storage room. "At the end Mr. Tyson busted through the door dressed like an SS agent. He was pretty convincing."

Franco can be a wag when he permits himself and, like many actors-who-write, he excels at dialogue. In one particularly lively sequence, a boy tries to persuade his friend that every children's-book character is gay.

"Cat in the Hat?" I said. "Gay. The Grinch? Gay. Hungry Caterpillar? He turns into a butterfly, gay!" Now Fred was thinking about it. I continued, "The Runaway Bunny, the bunny in 'Goodnight Moon,' the Velveteen Rabbit, Peter Rabbit, all gay. All rabbits are gay."

"They're sensitive, but different, but also like boys, but then also not."

He thought, and then said, "Yeah, I guess they are."

"The little boy who flies around naked in 'Night Kitchen,' and Max from 'Where the Wild Things Are, gay!'"

"Bull true, he dresses up in his little white wolf suit, so gay. And then he tells his mom to fuck off ..."

"… and then he goes to an island and hangs around with a bunch of monsters who party with him all night, dancing and parading him around on their backs."

"That's so weird, but I think it's kind of true," said Fred.

"All little-kids' stories have to be like that. They have to be all soft and gay, so that the moms are okay with it."

Fred sat there, and then he said, "I want a wolf suit."

Shorn of its profanity, the whole exchange might have nestled comfortably into Franco's breakout show, "Freaks and Geeks." But if Judd Apatow is Franco's spiritual godfather, this book's true habitat is the creative-writing seminar, where Franco has communed with the likes of Mona Simpson and Gary Shteyngart and where, through trial and error, he has learned how to make a work of fiction pass muster with the MFA gods. "Palo Alto" is, by direct consequence, sad, sensitive, concerned at all times with its authenticity and uncontaminated by plot (even, at times, incident). Above all, it forebears to judge its teenage protagonists, blaming their behavior instead on that venerable bete noire of literary intelligentsia: the burbs.

"Fuck into this," one of Franco's kids scrawls on a mailbox. "Born into this." Born, yes, into these wide, tree-lined streets with their spotless mailboxes and Scotts Lawn Care yards. A plain of anomie. If these kids were growing up now, they'd all have My Chemical Romance ringtones and they'd be slamming each other on Facebook and uploading manifestos onto YouTube. But this is still the early '90s, so all they can do is drink and smoke pot and argue and drive somewhere and drive somewhere else, and the effect finally isn't cumulative but reductive.

That's partly because Franco hasn't developed the ventriloquial skills to differentiate his voices. Narrator after narrator speaks in the same clipped, bruised tone, and you don't even notice when a girl takes up the story thread because her diction is no different from the boy who preceded her. The only thing that gathers, finally, is a pool of self-pity. "It can be so boring being you sometimes … We're stopped for no reason except that the night is still going and we're drunk, and who wants to go home, ever, and this spot is as good as any to just sit in the shadows and let life slow … This world sucks, and even if you are high it only lets you escape a little bit, it lets you escape enough that you know there could be something better, but it won't let you into that place."

As insights go, these don't vault much higher than "The Breakfast Club," but they do suggest that James Franco has enacted the teenage mind-set rather too well. The narcissism, the grandiosity, the contempt for maturity, these he has made his own, and for his epigraph, he has approvingly (and, OK, pretentiously) quoted Proust: "Adolescence is the only period in which we learn anything." But the Proust who wrote that was a middle-aged man, capable of setting his youthful experiences in a wise and, at times, ironic perspective. That's the artist's task, and that's the task that Franco, for all his ability, hasn't risen to here. He's a grown-up afraid of grown-up wisdom.