I was anti-gun, until I got stalked

I can't stand weapons. But after disturbing e-mails and letters, I decided to arm myself with more than words 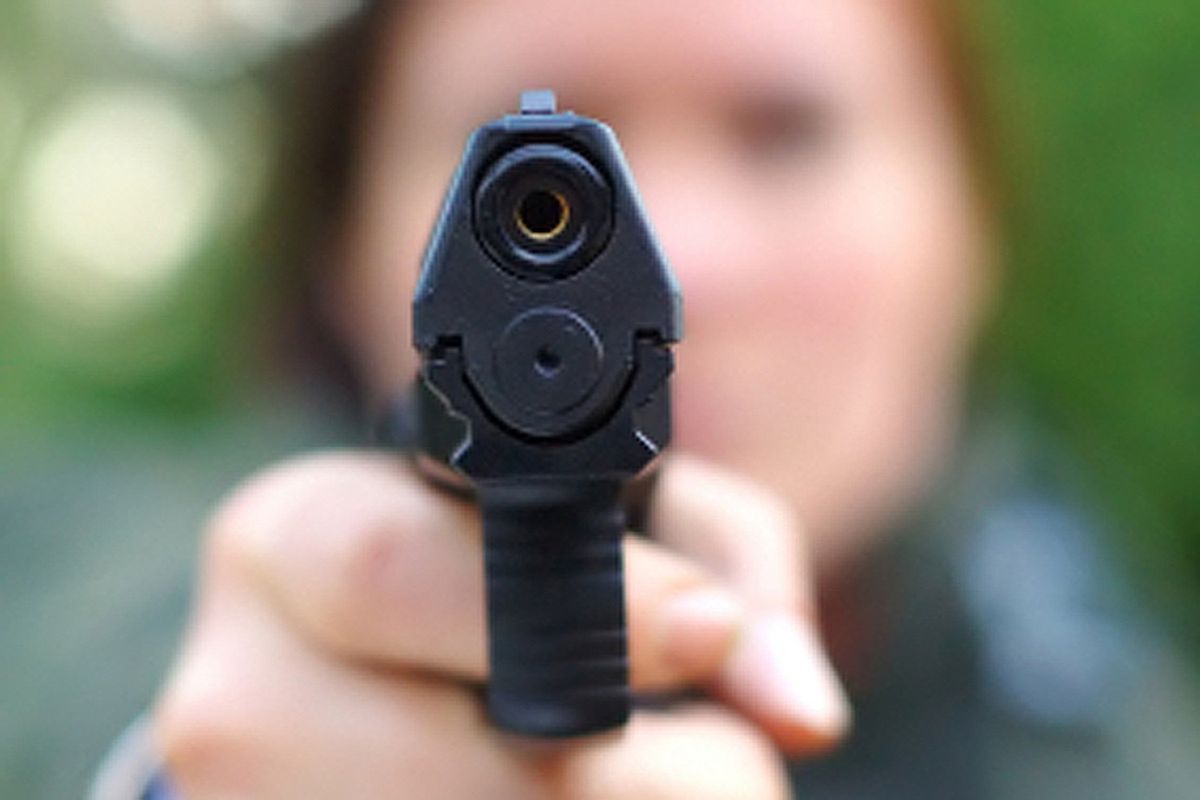 "You need to arm yourself."

I blinked at the Portland police officer in my living room. This uniformed bear of a man -- packing a gun, a nightstick, a radio and who knew what else -- was responding to an ongoing stalker problem that had started several months earlier. I'd received letters, a phone call, a few packages and several e-mails from this unbalanced stranger who'd read a few newspaper stories I'd written and taken a shine to me. When the latest letter arrived -- mentioning my boyfriend, Mike, thoughts on religion, and a trip I'd taken but hadn't told anyone about -- I was seriously alarmed.

But get a gun? Surely, I'd misheard him.

"Getting a concealed carry permit isn't hard," the officer continued. "And they make ladies' purses with concealed weapons compartments."

In that moment, I understood the phrase, "blood turning to ice." I'm afraid of guns. When you get right down to it, I abhor them. I used to date a guy who owned a handgun and regularly trekked into the woods with his friends to shoot. I made him move the small gun safe from beneath the bed to another room before I'd agree to stay overnight.

But that morning was like a perfect storm of firearms. The first thing Mike had said to me when I opened my eyes -- hours before the officer made his suggestion, before my neighbor confided she'd been thinking of getting a gun for hiking and kayaking trips, before my retired military uncle e-mailed to say that arming myself probably wouldn't be a bad idea -- was, "Maybe you should get a gun."

The officer saw the dismay on my face. "Most bullet wounds don't kill people," he assured me. "And it would be self-defense."

I spent the rest of the day in a general freakout.

I was hopeless trying to get any work done. Periodically, I'd do Web searches on handguns. I discovered that Oregon is a right-to-carry state and that it costs $65 for a concealed carry permit -- $50 for the four-year permit and $15 for the background check. I learned the difference between a pistol and a revolver -- a revolver's chambers revolve, like the six-shooters in Hollywood Westerns -- and I read that the .357 Magnum and .38 Special were ideal for women interested in a gun for self-defense because they're relatively lightweight, aren't prone to jamming and don't carry too many bullets. Because who really needs a 20-round magazine when you're defending against a stalker? "Six or seven bullets will do you just fine," read one Web comment.

But the idea of owning a gun made me sick to my stomach. That afternoon, when I escaped into a fitful nap, I dreamed people were pointing double-barreled shotguns at me.

When I thought about it, I realized I'd grown up with firearms in the house -- from the antique rifle mounted on the sun porch wall to the Colt .45 in my father's sock drawer. When I was 7, I watched my cousins shoot targets on the family farm in Virginia. I'd even picked up the hot shell casings as souvenirs.

As an adolescent, I'd spent my own money on a Daisy air pistol. I was surely the only girl at my single-sex prep school who owned a weapon, and I trained with it regularly, which is probably why, years later, I was an ace shot in paintball (Code name: Salad Shooter). Even the ex-military guys clamored to get me on their teams.

But that was a far cry from carrying -- or firing -- live rounds.

As Mike tried to sleep, I fretted out loud. I told him a firearm in the house made me nauseous, that I feared the weapon would be turned on one of us, that there'd be an accident. I told him I believe in compassion and peace. I told him the very idea of a gun was a compromise of my principles.

Mike sighed. "Which would you prefer, compromising your principles or getting abducted by Crazy Man?"

That's when the old Theodore Roosevelt adage popped into my head -- "Speak softly and carry a big stick" -- and I finally got it. I can still be the compassionate, diplomatic, interfaith groovy gal I've always been; I'll just be packing heat in case negotiations tank.

When I got another letter from the stalker -- a movie schedule with show times circled, alongside a handwritten note that was way too familiar -- Mike looked up the nearest gun dealer and put me in the car.

"This guy is pissing me off," he told me. "I already have enough stress without this."

So now, after a background check and fingerprinting, I have my very own Ruger .38 Special -- a black, five-shot double-action revolver that fits my small hands disturbingly well.

I was petrified when I went to the firing range for the first time. The police officer behind the counter laughed at my Ruger. "Oh, you've got one of those dinky guns!" he said. He warned me how bad the recoil was going to hurt, which scared me even more.

The woman standing beside me leaned over and whispered, "Don't mind the guys trying to be all macho." She was packing the same make and model I had.

Another officer took pity and walked me into the range to demonstrate every single step of loading, holding, aiming and firing my weapon. He showed me how to stand and how to eject the bullet casings afterward. Still, even with ear protection, I literally jumped every time someone else pulled a trigger. Gunshots are LOUD.

My hands were shaking as I loaded the .38, and I was still flinching every time the guy in the next lane fired off his .45. I focused on everything the police officer showed me. I kept the barrel pointed down range and my fingers curled around the cylinder until I was ready to snap it back into place. I remembered to keep my thumbs off the gun, and to keep the grip lodged firmly against the fleshy part between my thumb and hand. I aimed, put my finger on the trigger, and fired.

The gun kicked hard, but not as bad as I'd feared, and it was more startling than painful. I shot a few more rounds, making adjustments to my aim for the recoil and my own jumpiness. After I'd gone through two full cylinders -- 10 bullets -- Mike took a look at the paper target. Every single shot had not only hit the target, but gone right into the chest and head of my paper dummy. Mike was impressed. Frankly, so was I.

After going through a box of 50 rounds, I left the range with black-smudged fingers that smelled of gunpowder. My firing hand was sore the next day, and the truth is -- two months and more target practice later -- I'm still not entirely comfortable having a handgun in the house. Whenever the dogs erupt in the middle of the night in a barking frenzy, my thoughts go immediately to my .38.

But I'm not as afraid of my stalker as I used to be, either. I'm armed now, with more than words and good intentions. He keeps sending upsetting letters, but if he ever pays a visit ... Jenny's got a gun, and she knows how to use it.

Freelance writer Jennifer Willis specializes in topics related to sustainable living, religion/spirituality, history and health, and she is a founding member of the Oregon News Incubator. She lives with two big dogs in Portland, Ore., and can be found online at www.jennifer-willis.com.

Jennifer Willis is a freelance writer who lives in Portland, Oregon.