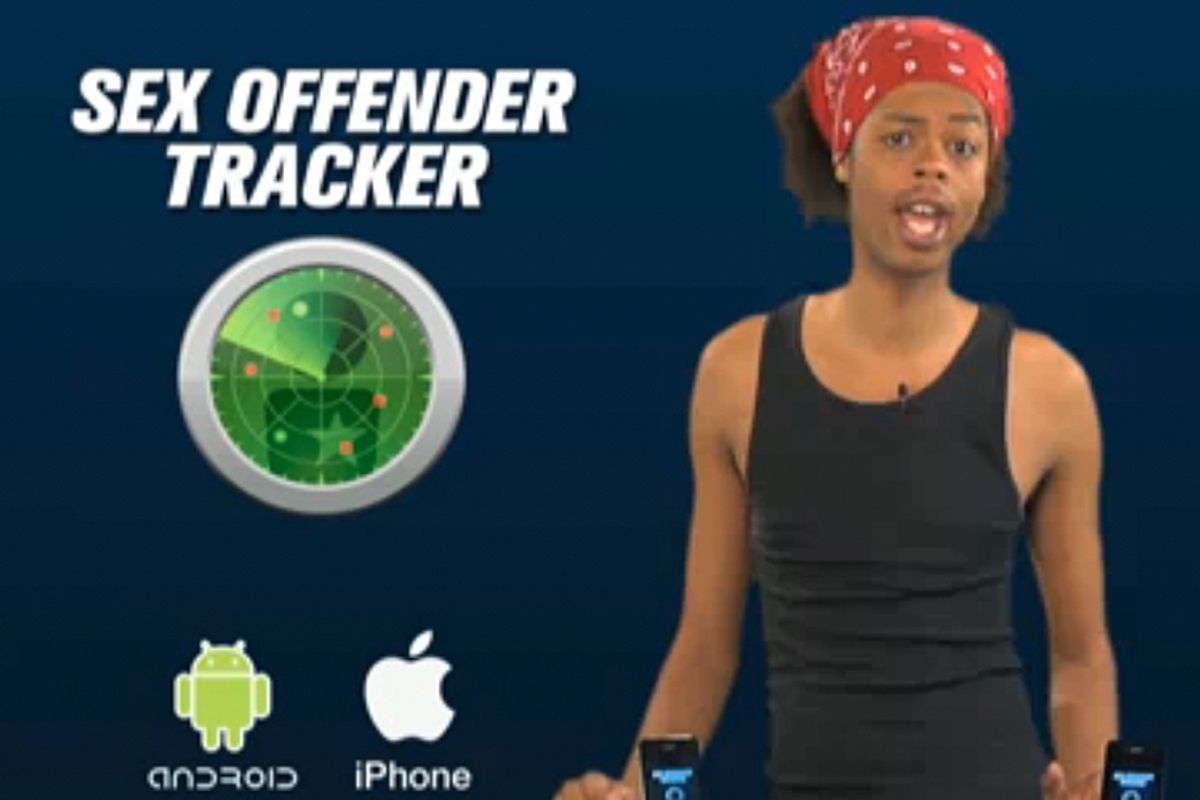 On Monday, the background check and search service BeenVerified.com teamed up with the Rape Abuse & Incest National Network to announce the release of "the world's first augmented reality sex offender tracker." And who did the company use to promote the newest technology in personal protection and/or privacy invasion? Antoine Dodson.

Dodson, better known as the "hide your wives, hide your kids" guy, gained the kind of fame only the Internet can provide this summer when an intruder climbed into the bed where his sister was sleeping with her daughter and tried to rape her. Antoine frightened off the would-be assailant, but it wasn't his heroism that made him a star: It was his distinctive red bandanna and his blunt, off-the-wall warning on the local Huntsville, Ala., news. "Obviously, we have a rapist in Lincoln Park. He's climbing in your windows, he's snatching your people up trying to rape them. So you all need to hide your kids, hide your wife, hide your husband because they raping everybody out here." His exasperated disgust at a "homeboy" so "dumb" cried out for viral fame, political parody and an inevitable slew of catchy remixes -- most notably a Gregory Brothers version that cracked the Billboard chart.

Dodson, whose quick thinking didn't end the night he chased an attacker out of his sister's bedroom, has been reaping the fruits of sudden notoriety ever since. He has spun off his incredibly specific brand into a Halloween costume on the inevitable Bedintruder.com and gave a brief, spirited and enthusiastically received  performance of his hit at the BET Awards.

There's an awful lot about Dodson's notoriety to make humanity squirm; the fact that an African-American gay man from the projects, a rape victim himself, is clinging to his 15 minutes of fame on a swaggering, sassy, keepin' it real shtick remixed by a bunch of snarky white folk suggests that the joke is, to a large extent, on him. And the even bigger elephant in the room is the fact that Dodson's celebrity, his catchy auto-tuned hit, and his entire "bed intruder" persona hinge entirely on an attempted sexual assault.

That a local news story of a potentially violent crime has, three months later, become Antoine Dodson's stock-in-trade is on one level a beautifully only-in-America tale. And Dodson seems quite willing to exploit his hyperbolic allure -- earlier this year he told NPR, "This could be an opportunity for our family to get out of the 'hood. I took it and I was running with it. And I'm still running with it." Why shouldn't the aspiring hairdresser milk his moment in the sun?

Yet the alliance of RAINN (one of "America's 100 Best Charities"), a $1.99 app, and a guy who's shilling Halloween costumes of himself is an uneasy one to say the least. BeenVerified's co-founder Ross Cohen, however, insists: "RAINN and Antoine Dodson are ideal partners in this effort. They believe so passionately in the need to prevent sexual violence and to provide help to victims. Moreover, they both have a unique voice to make a difference in this fight."  Dodson's "unique voice," in this case, translates as a YouTube clip explaining, "Basically, if these people did done bad and they're near your pad, the Sex Offender Tracker's going to show you where they at." He then goes on to cite the impeccable authority that is Wikipedia. Oh, hilarious, app-enhanced sexual predator-identifying good times! Tom Perrotta must be kicking himself for all the missed narrative opportunities here.

Per Antoine Dodson's directive, I downloaded the Sex Offender Tracker, and immediately pulled up the names, photos and addresses of eight registered sex offenders within a two-mile radius of my home. Does knowing the face of the guy a few blocks away who did time for rape and forcible compulsion make my daughters or me any safer? Is the ability to identify a pedophile worth my $1.99? What am I going to do, stop somebody at the Rite Aid and say, "You look just like the rapist on my app!"? Thumbing through the profiles of these registered criminals, knowing where they live, I sure don't see a whole lot of protective value. I don't see much entertainment either. I just see eight sex offenders and Antoine Dodson's branding. And it's sad.

There is something to be said for the power of vanquishing fear by making mockery of the enemy. On a July evening a predator climbed on a garbage can and attacked Kelly Dodson in her own bed. The intruder is still at large, but he's gained his own kind of fame as the dumb shmuck who had better steer clear of the Dodson household. It's not as satisfying as capturing a criminal, but it's the only justice Dodson and his family have: the rather remarkable ability to laugh about the event, to render it absurd, to make a little money off it. They turned what could have been a horrifying event into an opportunity. But there's also a degree of moral compromise that comes from gleefully singing about your sister's near rape at the BET awards. Antoine Dodson seems comfortable in his choice. The only question that remains then is how complicit do we – BET and the Gregory Brothers and RAINN and idle YouTube viewers – want to be in his never-ending sexual assault singalong?