A blogger's disdain for fat people sets off a firestorm -- but did the outrage do any good? 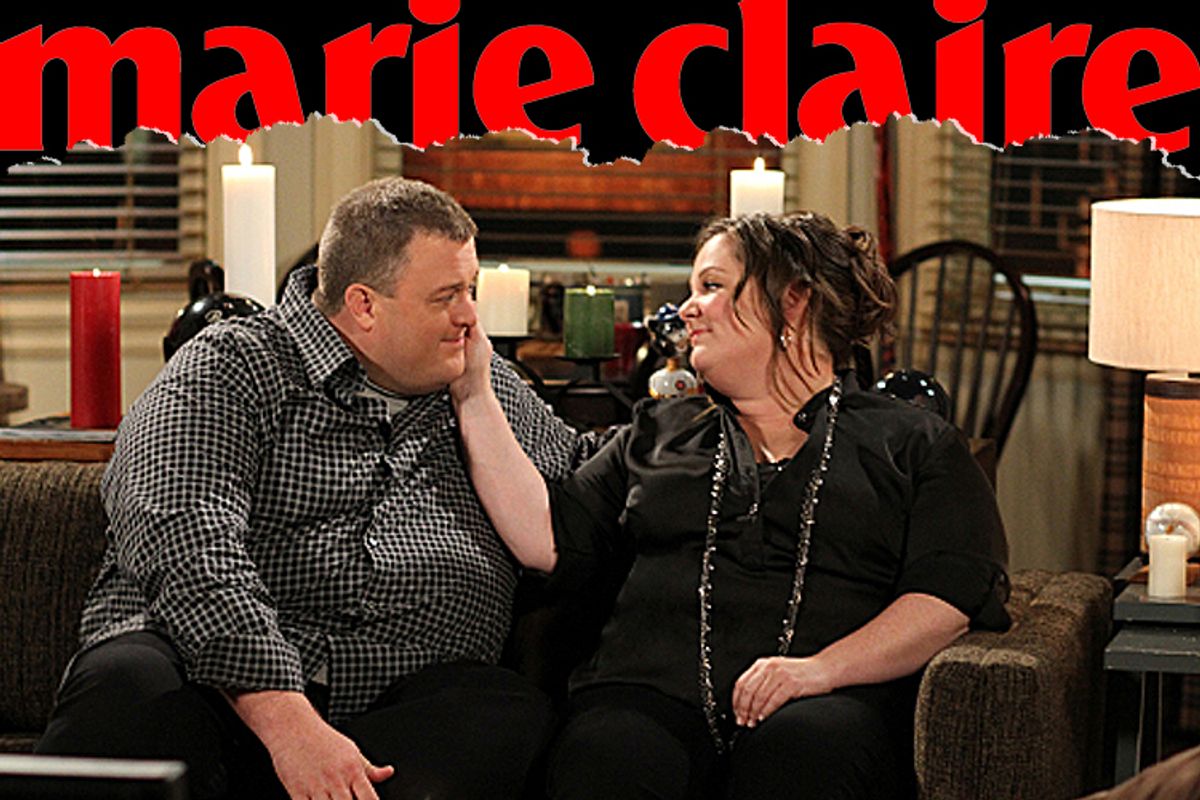 Maura Kelly does not want to look at overweight people getting their mack on. In fact, as the 30-someting writer and recovering anorexic revealed in a Marie Claire blog about the sitcom "Mike and Molly" Monday, titled "Should 'Fatties' Get a Room?," "I think I'd be grossed out if I had to watch two characters with rolls and rolls of fat kissing each other ... because I'd be grossed out if I had to watch them doing anything." For someone who insists she's "not some size-ist jerk," her blithe comparison of the "very very fat" to "a very drunk person stumbling across a bar or a heroine [sic] addict slumping in a chair" sure set off size-ist jerk alarms across the land. And because Kelly herself opened up the floor when she ended her post with, "What do you guys think? Fat people making out on TV -- are you cool with it? Do you think I'm being an insensitive jerk?" a rousing chorus of "Since you asked ..." went up in response. "Size-ist? Check. Jerk? Check," wrote a typical commenter. "You have some major issues, a startling lack of humanity, and very poor professional judgment."

Much like Juan Williams' recent bonehead admission that "When I get on the plane, I got to tell you, if I see people who are in Muslim garb and I think, you know, they are identifying themselves first and foremost as Muslims, I get worried. I get nervous," Kelly's stunningly insensitive remark set off a firestorm of outrage -- and a small but dispiriting amount of endorsement. Marie Claire's editor Joanna Coles, displaying tenacious cluelessness in the face of opportunity for insight, told Fashionista.com Wednesday, "Maura Kelly is a very provocative blogger. She was an anorexic herself and this is a subject she feels very strongly about," and Kelly was "excited and moved" by the thousands of e-mail responses and comments.

But now, nearly 1,000 comments, several canceled subscriptions, and a whole lot of righteous indignation in, can any good come out of Kelly's and Marie Claire's epic blunder? Or is the quaint notion of a "teachable moment" dead?

Soon after her post went up, Kelly, apparently realizing that the votes were in and the verdict was "jerk," wrote an update. "I would really like to apologize for the insensitive things I've said in this post. Believe it or not, I never wanted anyone to feel bullied or ashamed after reading this, and I sorely regret that it upset people so much. A lot of what I said was unnecessary; it wasn't productive, either." She even added that "my extreme reaction might have grown out of my own body issues, my history as an anorexic, and my life-long obsession with being thin."

It's safe to say that attitudes and perceptions don't change overnight, if ever. Kelly still felt the need to qualify her comments as pertaining strictly to the "morbidly obese," as if that makes them somehow more acceptable. Certainly the writer, who openly describes herself in previous columns as "slightly prudish," likely has miles to go, enlightenment-wise, but who among us would want to be known for the least noble thought we ever expressed? Would a rapid, "I've thought it over and I am completely over all my body issues and cool with everybody now! My bad!" statement have been in the least bit credible? She apologized, and she may even have meant it.

But while Kelly may indeed still qualify as a "jerk," what to make of the commenter Wednesday who said, "Your mother should have aborted you but then your father, Satan, would have probably gotten a bit upset." Or the one who called her "a mean spirited b*tch of the highest order"? If anything, the anger over her column seems only to have increased since she posted her mea culpa. "What a crock of crap. Ms. Kelly your apology is NOT accepted!" wrote one reader, who then, ironically, went on to ask, "Have you no compassion?"

Nobody should get paid to say he or she is scared of Muslims or is grossed out by fat people. And if you actually feel that way, keep it to yourself. Those are hateful, hurtful statements, and when someone makes them, it is acceptable, nay, imperative, for the rest of us to point it out. It is reasonable to say, we will not support this. But Maura Kelly's sensitivity fail is epic proof that not all thoughts should be expressed -- especially the cruel, vindictive variety. And you don't have be size-ist to act like a jerk. So kudos to the commenter who wrote, "Maybe the best thing to come out of this is increasing the amount of Love in your heart for your fellow human beings," because that commenter is the person in all of this who saw ignorance and met it with kindness, who saw prejudice and responded with understanding. She was the one who chose to be reasonable, articulate and humane, to add something positive to the conversation instead of lazily tearing people down. Marie Claire, give that lady a blog.