Lisbeth is sidelined, but the massive conspiracy is exposed as the "Girl Who ..." trilogy hits a powerful last note 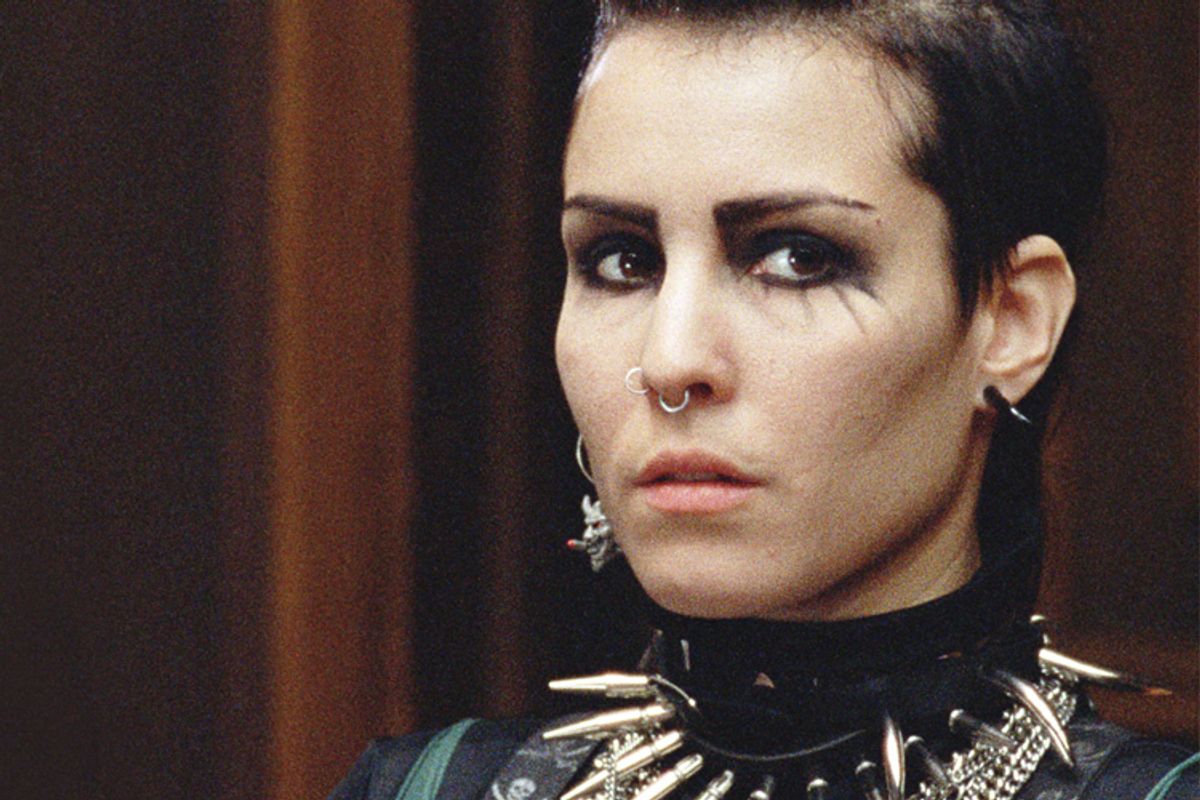 Noomi Rapace in "The Girl Who Kicked the Hornet's Nest"
--

By about halfway through "The Girl Who Played With Fire," the second installment of the Swedish adaptation of late novelist-journalist Stieg Larsson's Millennium trilogy, I was concerned that the entire enterprise was out of gas. That movie, directed by Daniel Alfredson (whose brother Tomas made "Let the Right One In"), was a major letdown from the series' riveting first film, Niels Arden Oplev's "The Girl With the Dragon Tattoo." By contrast, "The Girl Who Played With Fire" felt like an increasingly perfunctory mishmash of American-style plotting and European atmosphere, more concerned with hitting the right notes in the right order -- Lisbeth on a motorbike! Lisbeth's evil ex-KGB dad, plotting more evil! Lisbeth's freakish, fearsome half-brother, killing people! -- than with telling a good story.

I began to harbor the heretical suspicion that the long-brewing Hollywood version, from "Social Network" director David Fincher and "Schindler's List" screenwriter Steven Zaillian, might be an improvement. That may still prove correct, but the good news is that Alfredson finds his footing in "The Girl Who Kicked the Hornet's Nest" and delivers a rousing, grueling, almost operatically scaled finale to the series. There are undeniably some problems here that may limit the film's audience appeal: "Hornet's Nest" is a densely plotted procedural, constructed largely around crusading journalist Micke Blomkvist (Michael Nyqvist, Scandinavia's answer to Harrison Ford, at his understated best) and his sister, defense attorney Annika Giannini (Annika Hallin), who adds a much-needed female moral center.

Annika's star client is of course the trilogy's damaged and charismatic heroine, Lisbeth Salander (Noomi Rapace), who is reduced here to a supporting role. Lisbeth's many admirers will be disappointed that she isn't called upon here to torture any rapists or engage in high-speed chases, since she spends most of the movie either recovering from a brain injury or standing trial for the attempted murder of her father, onetime Soviet defector Alexander Zalachenko (Georgi Staykov). She does show up in court in a glorious assemblage of mid-1980s Goth-punk piercings and leather, which wouldn't be my choice for a felony defense, but there you have it. As we all know, Lisbeth isn't inclined to take shit from the likes of you and me. Is she destined for one more face-to-face confrontation with her Frankenstein-like half-brother, Ronald Niedermann (Mikael Spreitz), who's been on the run since the end of "Fire"? Readers of Larsson's novels already know the answer, and others will have to find out for themselves.

While Lisbeth cools her heels in a hospital room and/or a prison cell, Micke and Annika methodically unpack the enormous conspiracy that victimized her in the first place. Lisbeth wasn't the real target, mind you; she was collateral damage inflicted by a clandestine organization whose tentacles reach virtually every corner of postwar Swedish society. Even the sinister Zalachenko, like the Nazi-linked woman-killers of "Dragon Tattoo," turns out to be no match for the deep-cover secret police who hold the real power in this supremely orderly society. Despite moments of confusion and clunk in "Hornet's Nest," Alfredson and writers Jonas Frykberg and Ulf Ryberg succeed wonderfully at capturing Larsson's central premise: Beneath the neutral, rational, pseudo-socialist Nordic calm of modern Sweden lie the worst and darkest kinds of secrets.

How plausible or realistic that is I have no idea, and for audiences outside Sweden that stuff is more ominous atmosphere than social criticism. (I could point out that we live in a society that has blindly and enthusiastically given up its liberties to the secret police over the last decade, but let's move on.) It remains to be seen what Zaillian and Fincher will make of Larsson's material, but his barbed and ironic critique of Scandinavia's social order is not likely to be high on their agenda.

If you can navigate the thick forest of new characters and competing agendas in "Hornet's Nest" -- special kudos go to Anders Ahlbom Rosendahl, who plays Lisbeth's corrupt and unctuous shrink -- the movie reaches a powerful but gloomy crescendo, in which the catharsis and redemption this kind of story demands are tempered by innate Swedish skepticism. You have to wonder how Fincher and his collaborators will deal with the relationship between Lisbeth and Micke, who become lovers in "Dragon Tattoo" and then are kept apart for nearly all of the two succeeding narratives. (Let me go on record as saying that Micke behaves abominably toward his gorgeous and age-appropriate colleague Erika, played by the wonderful Lena Endre.) They conclude on an extremely un-American note of melancholy and irresolution: Sure, at least some of the bad guys have been vanquished, for now. But there's no way to undo the painful European past, and it lingers.