Only $4.2 billion to buy this election? 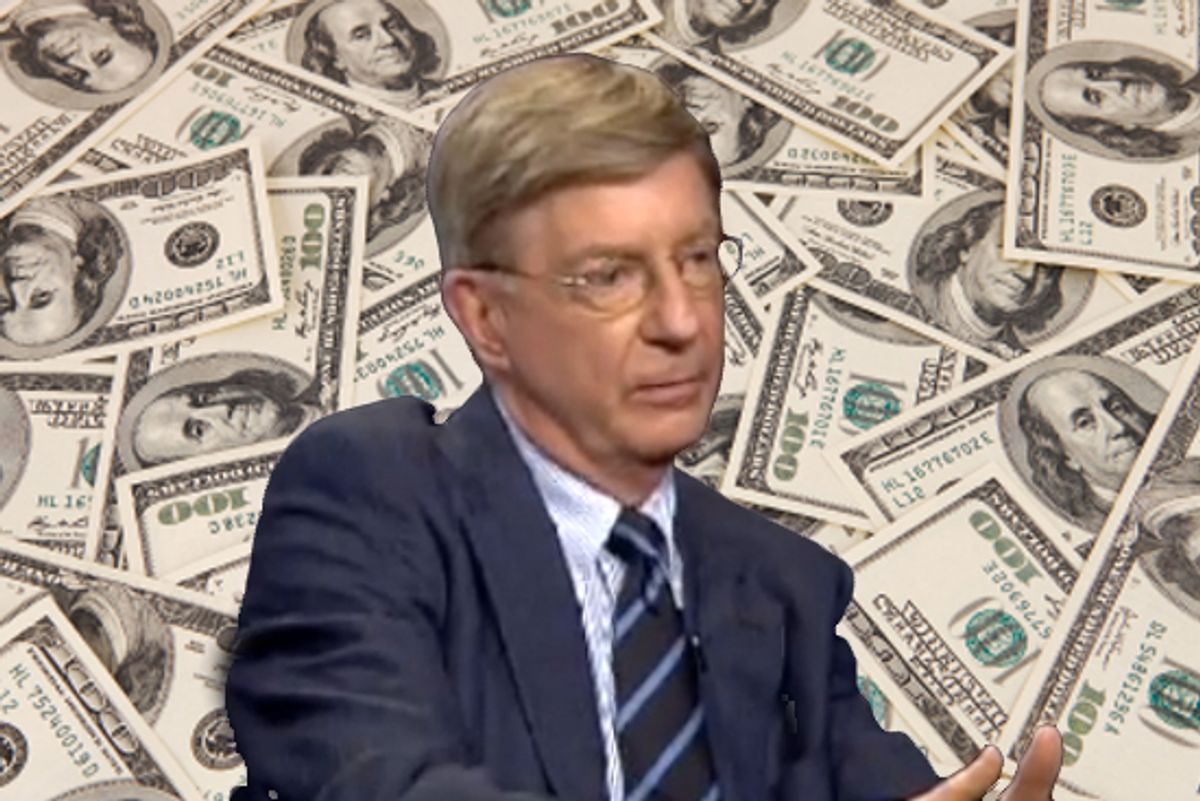 This, from the Washington Post’s conservative pundit George Will:

Total spending by parties, campaigns and issue-advocacy groups concerning every office from county clerks to U.S. senators may reach a record $4.2 billion in this two-year cycle. That is about what Americans spend in one year on yogurt, but less than they spend on candy in two Halloween seasons. Proctor & Gamble spent $8.6 billion on advertising in its last fiscal year.

Those who are determined to reduce the quantity of political speech to what they consider the proper amount are the sort of people who know exactly how much water should come through our shower heads — no more than 2.5 gallons per minute, as stipulated by a 1992 law. Is it, however, worrisome that Americans spend on political advocacy — determining who should make and administer the laws — much less than they spend on potato chips, $7.1 billion a year?

The number of dollars spent isn’t the issue; it’s the lopsidedness of where the dollars come from. Even if the total were only $1,000, democracy would be endangered if $980 came from large corporations and wealthy individuals. The trend is clear and worrisome: The great bulk of campaign money is coming from a narrower and narrower circle of moneyed interests.

Anyone who doubts the corrupting effect has not been paying attention. Our elected representatives have been acutely sensitive to the needs of Wall Street bankers, hedge-fund managers, and the executives of big pharma, big oil and the largest health insurance companies. This is not because these individuals and interests are particularly worthy or specially deserving. It is because they are effectively bribing elected officials with their donations. Such donations are not made out of charitable impulse. They are calculated investments no less carefully considered than investments in particular shares of stock. They are shares in our democracy.

Why $4.2 billion and not 10 times that amount? Because the high-rolling political investors don’t need to spend a dollar more in order to exert overwhelming influence.

This figure, by the way, leaves out the tens of billions of dollars dedicated to lobbying, lawyering and public relations -- all of which deliver specific legislative outcomes the campaign money fuels. The economy of Washington, D.C., depends on this gigantic flow of funds (supporting the polished facades of refurbished hotels, fancy restaurants, trendy bistros, office complexes of glass and polished wood, well-appointed condos, hotels with marble-floored lobbies and thick rugs, restaurants serving $75 steaks and offering $400 magnums of vintage French wine). Washington’s seven suburban counties are listed by the Census Bureau as among the nation’s 20 with the highest per-capital incomes.

Failing to include this larger apparatus in an estimate for how much money now greases the legislative skids is analogous to estimating the cost of private transportation in America by what’s purchased at the gas pump without mentioning automobiles, roads and bridges.

Indeed, a full accounting of the cost of the flow of money into our political system would also include the carnage and roadkill in its path -- the public’s increasing cynicism about democracy, and America’s decreasing capacity to do what most of its citizens desperately need.