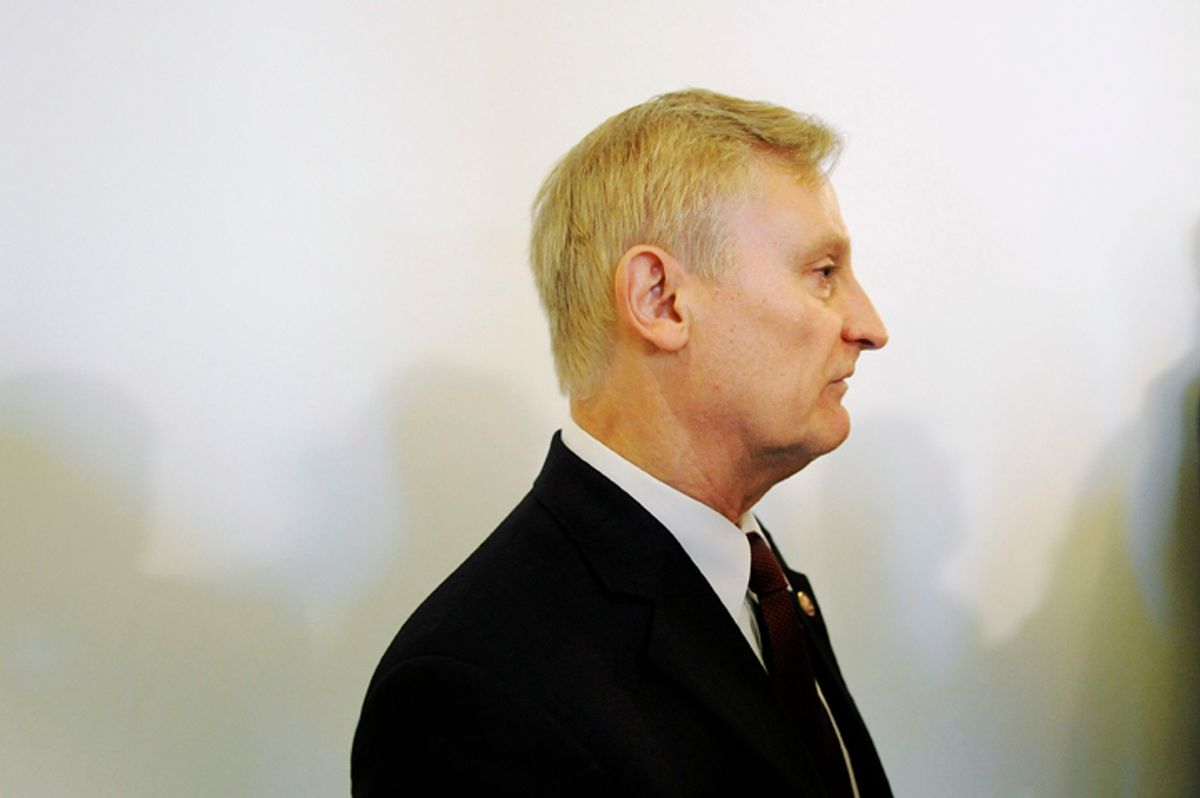 Citing their anger at what the "banks" had done to the U.S. economy as a key motivating force, American voters put Republicans back in control of the House of Representatives on Tuesday. As a consequence, the man most likely to replace Barney Frank, D.-Mass, as chairman of the House Financial Services Committee is Spencer Bachus, R.-Ala. Bachus, reports the Center for Public Integrity, received well over a million dollars from political action committees representing banks, insurance companies and auditors over the past two election cycles. And wasting no time, on Wednesday, reports the Financial Times, Bachus sent a letter to the Financial Stability Oversight Council -- the government agency charged with implementing the Dodd-Frank bank reform bill -- that reads as if dictated by bank lobbyists.

The Volcker bill, as elegantly explained by Simon Johnson, would "in principle ... force big banks to get out of the business of betting their capital in ways that can bring down the entire financial system." But in his letter, Bachus declares that "'proprietary trading' had virtually nothing to do with the crisis." Even worse, prohibiting the big banks from trading on their account would disadvantage them against competitors based in countries without similar rules, and "may spark a mass exodus of clients from U.S. banks to banks based abroad."

In addition, U.S. banks may choose to move their operations elsewhere to avoid burdensome restrictions on client-driven market making and the hedging and risk management activities growing out of such market making, which are natural activities of banks and bank holding companies. Not only will such a flight to foreign jurisdictions weaken the U.S. financial services industry, putting the U.S. at a competitive disadvantage against foreign financial centers such as London and Hong Kong, but heavy-handed implementation of the Volcker Rule will further constrict capital and lending, unnecessarily hobbling the provision of credit necessary for economic recovery in the U.S. and abroad.

The notion that "proprietary trading" had nothing to do with the crisis is nonsense. Merrill Lynch, to pick just one example, doomed itself by allowing the director of its bond trading unit, Osman Semerci, to recklessly bet bank capital on mortgage-backed securities, a tale told well in Greg Farrell's new book, "Crash of the Titans." Even more risible, however, is the idea that regulators should be concerned with the "competitiveness" of the U.S. financial industry. The U.S. financial industry broke the global economy. Our primary goal should be ensuring it does not have the power to do so again. If that means making it smaller and less profitable -- great! In the run-up to the financial crisis, the financial sector accounted for far too large a proportion of U.S. economic activity. It should be smaller.

Even if Bachus does become chairman of the House Financial Services Committee (he has already been challenged for the leadership position by California's Ed Royce), he won't have the unilateral power to revoke the Volcker rule. But in coming years, government agencies will be writing scores of rules to implement bank reform, and congressional committees are charged with putting together dozens of "studies" to determine the exact path of implementation. Bank lobbyists will be conducting pitched warfare for the next two years over every aspect of that rule-writing and the conclusions of those studies. Bachus is their point man in that struggle.

The great irony here is that the Volcker rule was the Obama administration's direct response to the upset election of Republican Scott Brown in Massachusetts. Brown capitalized on anger against the bank bailout in his successful campaign, and the White House correctly realized it needed a course correction that signaled a stronger line against the banks. The beauty of the American political process is that Obama's failure to get tough enough against the banks ensured that Republicans determined to weaken bank reform are now in power.

Massachusetts, apparently, repented, electing Democrats to every statewide seat and in all 10 House races on Tuesday. One wonders whether the nation as a whole will have second thoughts, as well, two years from now.