Conan O'Brien makes his splashy TBS debut -- but can we love him when he's not down and out? 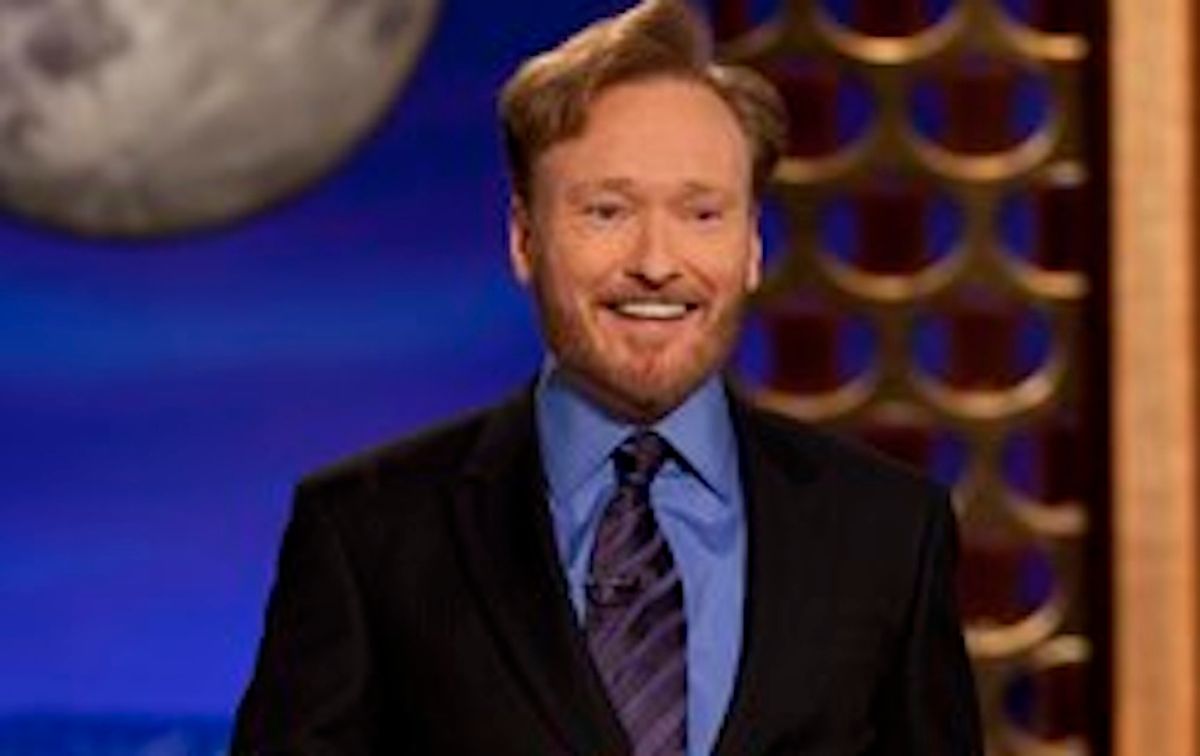 It's been 10 long months since Conan O'Brien, that fixture of late night, the man who was briefly the host of "The Tonight Show," departed the airwaves in one of the greatest public flameouts in television history. Ten months of touring and tweeting and riding around in a blimp, keeping himself in his fans' good graces. The television drought finally ended on Monday night, when O'Brien was officially reborn in his post Jay Leno-debacle bearded persona of Coco – and as the lead-in for George Lopez.

Of course, high expectations and crazy pressure are old hat to O'Brien, who introduced himself as the host of "Late Night" in 1993 with a jaunty filmed bit that capped with him nearly killing himself. This time out, he kicked off his debut with a segment that showed him scoffing, "You want me to move 'The Tonight Show' to 12:05?" before his life turns into a nightmare that combines "Walk the Line," "Mad Men," and ill-fated detours into the fast food and clown industries with the tollbooth scene from "The Godfather." What's left for a man who's been told he'll "never work in network television again" except the promise of "much less" on a channel devoted to round-the-clock "Family Guy" reruns?

The Conan who emerged onstage Monday for his "second annual first show" knew this new gig represents something both humbling and victorious, and he did a credible job acknowledging both. There was a filmed greeting from Ricky Gervais, offering diminishing congratulations for O'Brien's future gigs on the Food Network, Dayton morning television, and eventually, the indignity of satellite radio. There was O'Brien's introduction of his Max Weinberg-free "Jimmy Vivino Basic Cable Band" and his offhand remark that his show now shares space with a Meineke muffler shop. There was also the unequivocal enthusiasm of the crowd, which greeted its host with a standing ovation and chants of "Co-nan! Co-nan! Co-nan!" To which Conan, echoing his final "Tonight Show" monologue, quipped, "Please! We don't know how much time we have here."

Yet for all his trademark self-deprecating gooberishness -- his awkward, nipple-stroking dance moves have survived the transplant to cable TV intact -- no man could be expected to weather the outpouring of praise and stick-it-to-The-Man encouragement that O'Brien has this year and not feel pretty darn confident. It's evident in the fact that the show is not called "The Late Something With Conan" or "After Hours With O'Brien" -- it's called "Conan." Its Web page is "Team Coco." And not simply because, as he says, that will make it harder for the network to replace him. It's because, as the program's logo -- that iconic illustration of red hair -- indicates, the man is the show and the show is the man.

It's natural that after all the crap that's passed under the bridge, O'Brien's first episode would be heavily O'Brien-centric. He joked incessantly about his travails, showed off his swank, modern cool new set, and, frighteningly, donned the world's most depressing self-referential Halloween mask -- a pasty, poufy-haired "ex-talk show host." His sidekick Andy Richter, similarly decked out, drolly attested to its authenticity by noting, "The inside smells like tears."

Going forward, a talk show still needs to be, to some extent, about the guests. The best hosts, of which O'Brien has long been one, generally devote the first portion of the episode to their own zany antics, then smoothly move behind the desk and into the role of straight man, feeding cues to movie stars that make them look like witty storytellers. O'Brien did have a glib if predictable enough patter with guest Seth Rogen, who helpfully dropped a few "titties" and a trio of bleeped out s-bombs to prove this new badass TBS terrain is not Leno Land. And there was a visual joke to be had in O'Brien inserting the image of his gawky teenage self into "Glee" star Lea Michele's too-hot-to-handle GQ photo spread. But when O'Brien took to the stage with his personalized guitar strap slung over his shoulder to play "Twenty Flight Rock" with his good buddy Jack White, it was hard not to consider the grim possibility that this show could easily wind up becoming "The Coco Variety Hour."

And it was perhaps a bit of unintentional irony that the musical segment was followed by a promo for TNT's "Men of a Certain Age." Conan, after all, in many ways represents the year's greatest achievement in midlife crisis. Presented with a demoralizing downsizing, he instead chucked his job, wore his bitterness on his sleeve, went on a big cross-country road trip, and played his guitar. It's all considerably more inspiring than Charlie Sheen's middle-aged angst-fest, to be sure, but now what?

O'Brien is not the spurned Princess Diana to Leno's Camilla Parker Bowles anymore. He's the triumphant star of the most heavily promoted thing since Christmas, a wildly anticipated program that, like Comedy Central's power duo of "The Daily Show" and "The Colbert Report," has the potential to be the darling of a desirable, advertiser-friendly demographic. He's doing all right. His face probably doesn't even smell like tears anymore. He looks, frankly, incredibly relaxed and happy. On Monday, his gratitude to his guests and his audience -- whom he more than once reached out to hug it out with -- his palpable delight in doing what he adores again, were all abundantly evident. The question now is: Will audiences still love him tomorrow, when he's no longer the underdog? Is there still any point in being on "Team Coco" when that particular war is over? Can Conan go back to truly sharing the spotlight with his guests for 30 or 40 minutes out of every hour-long episode, four nights a week, after basking in so much intoxicating public love? And, most signficantly, can his talk show format itself be something more spontaneous and engaging than the usual heavily scripted back-and-forth better left to the Lenos of the world anyway? It'll be interesting to see what unfolds Tuesday, when his guest is reliably talk show scene-stealing Tom Hanks.

Maybe the most encouraging moment of the debut came when, during his chat with Lea Michele, an unexpected offstage noise briefly interrupted the repartee. "He's making the best of it!" O'Brien muttered, to himself and to the world. It looks, for the most part, that he's doing just that. And as Team Coco settles in, that's all we can do too -- to expect a few creaks and pings along the way, but keep hoping that O'Brien will embrace them, because that's where the best of it is anyway.