Why airplane dining has always been awful

If you think airline food is bad now, you should have seen it in its "glory" days 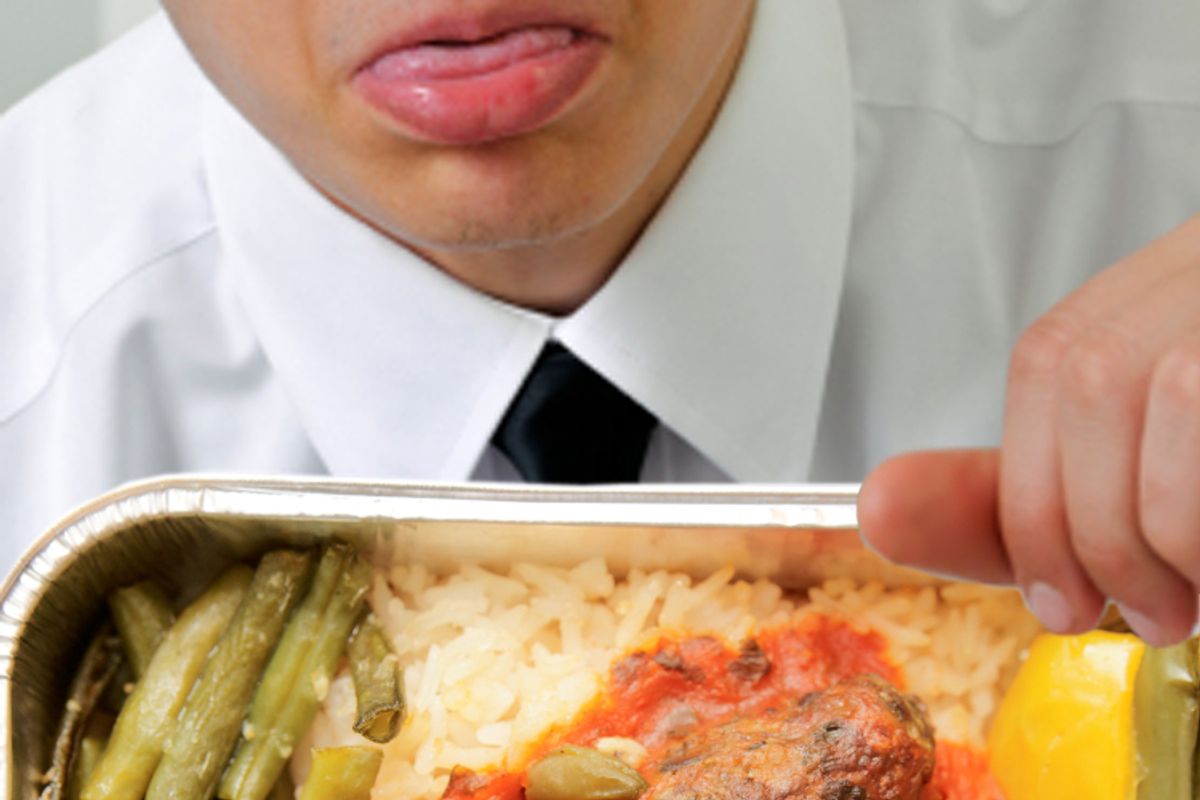 Airplane food has been a punchline for so long that it's almost shocking to remember that it used to be a striking symbol of class. It was the meal with the flavor of a remade world, a globe suddenly shrunken, an awe-inspiring update of the glorious days of ocean liners and trans-continental railroad dining cars, all big wines and beefsteaks, but, magically, thousands of feet in the air.

It's a history that seems to ring hollow, though, when you're cramped in coach, eating your packet of sorry peanuts and considering whether it's worth the eight bucks for a cardboardy chicken wrap. But those in the know remember a different time, like Patrick Smith, author of "Ask the Pilot," who recalls: "My very first airplane flight was in coach, an hour-long domestic flight in 1974. They served hot sandwiches and a cheesecake dessert," a far cry from pretzel dust and two more cookies you wish you could ask for. So what happened?

Well, nostalgia aside, it turns out that airplane dining has a long history of high suckitude. This is not to say that airlines haven't in the past paid more culinary attention to what they offer -- in fact, at one point, certain airlines once threatened to sue others for unfairly competing by offering food that was too good -- but an enlightening essay called "Is It Really Better to Travel Than to Arrive?" by historian Guillaume de Syon shows how the history of midair dining was never really a pretty one.

Yes, at first, well-heeled travelers took off in these new flying machines, white-gloved hands on their matching luggage, and prepared to enjoy civilized repasts seated at tables. The food was prepared by chefs, some hired from the finest hotels on earth and working in actual kitchens on board. But there was a problem: Flying back then was thoroughly nauseating. As de Syon writes:

"Up to World War II, airplanes flew unpressurized at low altitudes, and oil leaks, kerosene smells, deafening noise and serious vibrations were par for the course ... A Ritz chef hired to work for Air France in 1946 [said], 'altitude was always [a problem]. Like most passengers, I became ill. While caring for them, I would run to the bathroom and throw up [before coming back].'"

Of course, you have to imagine that, even without visible oil spills reminding you of the mortal vulnerability of the machinery around you, the very idea that you could get into a hunk of metal that took you up in the air for hours at a time had to inherently terrify the genteel passengers, and existential terror is rarely the stuff of which delicious meals are made.

Then there was the practical ramification of trying to cook, serve and eat while flying. At the time, their idea of turbulence correction was to hang on for dear life, so meals were spectacular demonstrations of physics and gravity, with hot food, knives and cooking fuel just flinging everywhere. If you think stale peanuts on your seat tray are lame, think of how exciting it could have been for pots of roiling soup to be splashing around the cabin. Or, decades later, when airlines moved to reheating food in huge microwaves that actually interfered with the plane's navigation. "Well, we were getting the Chicken à la King ready, and all of a sudden we were in Soviet airspace. Oops."

Undeterred, airlines never gave up on feeding their customers, and in fact, perversely, the fear and misery of air travel became its own reason to keep people fed:

"Any occupation that helped keep passengers' mind away from staring at the engines on the wings, for example, was a good thing ... Most airlines proceeded to downgrade to a heavily supplied bar, while some introduced female flight attendants expected to act as nurses administering aspirin and 'cordials' to worried passengers."

So if they couldn't make the skies friendly, airlines realized they could at least make the passengers thoroughly zonked. As flights got longer, passengers were fed food and booze early and often, and "flight attendants often knew enough to jack up the heat after takeoff to ensure most would doze off."

But as flight comfort technology improved, why did the food itself go to pot?

A lot's been made of a recent study on the effect of noise on diners' perception, which suggested that the constant roar of jet travel may actually dull our ability to taste, and it's long been understood that sitting in the bone-dry cabin air at high altitude actually impacts our senses of taste and smell. But John Besh, a star chef in New Orleans with a gaggle of superb restaurants and a pilot for a father, has designed meals for Lufthansa airlines and doesn't entirely buy the physiological argument.

"It's not hard to make up for that," he says. "A touch here or there -- lighter, citrus, spicy flavors are incredible. You really can still taste them." And he similarly dismisses the technical limitations of how the food has to be reheated and held on-board, saying that all you have to do as a chef is recognize that something that's saucy and cooked for hours anyway is going to hold up much better than something that might dry out, so you can focus the menu on cold dishes or braises and stews.

"The real issue is the sheer, vast quantities of food," he says, "made in multiple kitchens across the globe, and finding the fish you can buy in 500-ton lots. The food is going to lose a touch of soul in the process. The other thing is that airlines fly all around the world, with dietary restrictions that come into play. Cooking food from New Orleans, I grew up thinking pork is a vegetable. It's difficult to make that work for flights to the Middle East or India, for example. So these are the challenges you have to contend with."

Besh is quick to compliment the airline catering he worked with, but of course, he also designed his in-flight cuisine for business and first class. For the rest of us in coach, cuts in food service budgets mean meals rely more and more on national brands to put passengers at ease with what they're about to eat, which means they are in the awkward position of showing you minicans of Pringles to raise your confidence in the value and quality of your lunch. Sure, it's undeniable that Pringles are the world's finest reconstituted potato crisps. But are they enough to make you excited for a tray of mushy chicken pasta and a diamond-hard roll?

Still, the only thing we will accept less than bad free food is no free food (at least on long-haul flights. Cuts in domestic meal service across all the airlines has us beaten). In an interview, de Syon relayed that when one U.S. airline tried to charge for meals on transatlantic flights, furious passengers revolted and the carrier provided free meals again.

Since it was first used to signify class, then used to mollify the frightened masses, then to position flying as an experience of hospitality and not just transport, dining in the sky is ingrained in passengers as an inherent part of the ritual. And maybe, because there's still a part of our lizard brains that finds it hard to accept that a giant tube of metal can take you into the sky safely, a ritual as mundane as having a sip and a snack is what helps us stay sane as we rocket our way through the heavens.