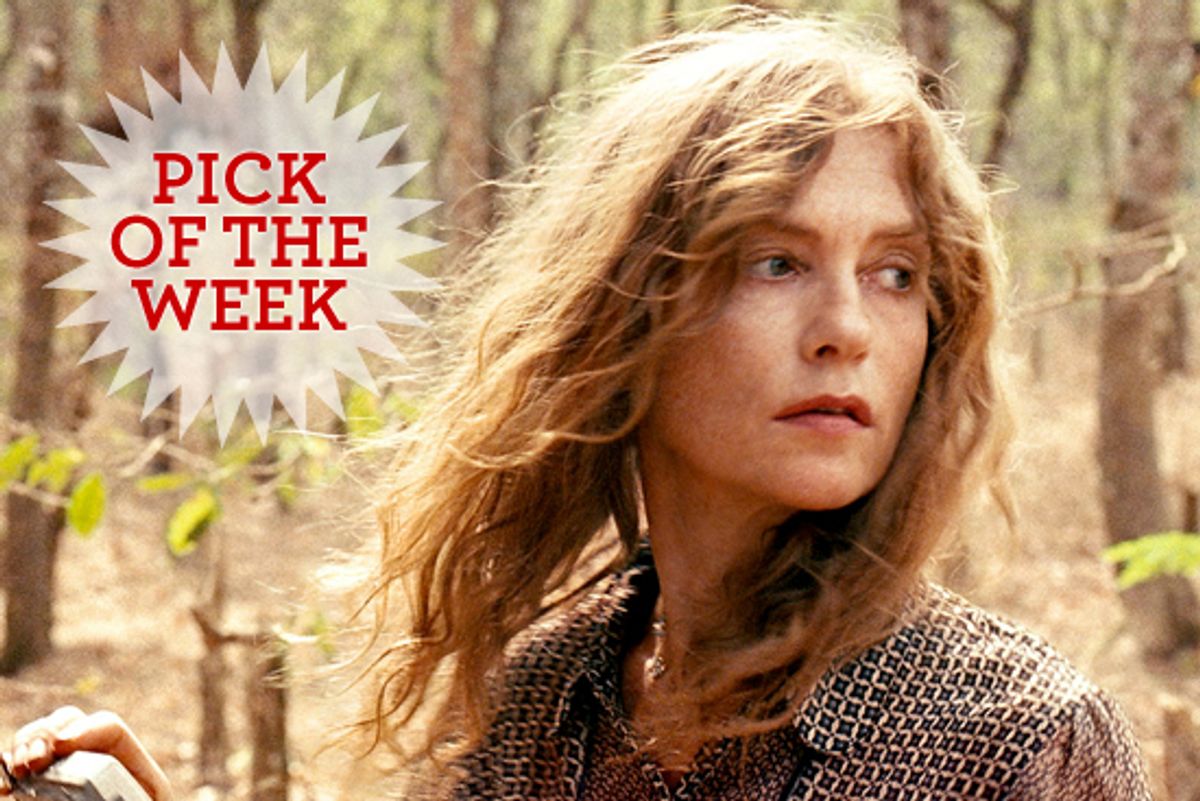 French director Claire Denis' new film is called "White Material," and the title is both metaphorical and entirely literal. (It's not a translation; the English words are also the French title.) The movie is an intimate, nightmarish, overtly realistic story about white people in Africa, specifically a French coffee-planting family that's facing the end of its economic power in some unidentified post-colonial Francophone African country torn between a corrupt government and an anarchic rebel movement. (Denis herself lived in Burkina Faso, Cameroon and Senegal as a child, when her father was a French civil servant.)

The phrase itself is often repeated, by the teenage rebels who torment Maria Vial (Isabelle Huppert) and her family, by the nationalist agitator who incites violence over Afro-reggae tracks on the radio, by the calm bureaucrat who already has a pseudo-European house much larger than the Vials' but now proposes to dispossess them in exchange for their lives. It refers to white people in general, but also to their stuff, their material substance. In the film's most troublesome and powerful sequence, Maria's dissolute teenage son, Manuel (Nicolas Duvauchelle), is humiliated by a pair of child soldiers, who cut off a lock of his hair in almost talismanic fashion. He responds by shaving the rest of it off, and then forcibly stuffing it, handful after handful, into the mouth of the family's former female servant.

"White Material" doesn't play by conventional narrative rules or offer much in the way of a straightforward plot. Denis leaves it up to the viewer to figure out her inside-out chronology; the movie begins near the chronological end to the story, when the unbearable buildup of tension has already exploded in unexplained violence, and fills in the details backwards and sideways from there. When the bedraggled, girl-slight Maria finds herself alone in the bush in a sundress, hiding from armed men and hitching a ride on the back of a bus -- one wispy piece of white material amid a crowd of black refugees -- what has become of her family? Nothing good, probably, but it will be quite a while before we learn the answer.

If you want to take those awful scenes involving Manuel as a central thesis, and propose that "White Material" is a near-biblical parable of how madness begets madness, and how the evil visited upon Africa by people who look like the Vials gets visited upon them with interest, you're probably close. French superstar Huppert is like a force of nature as Maria, but not much like a benevolent or sane one. Maria is committed to bringing in the coffee harvest, despite the fact that all her workers have fled in the face of the rebel uprising. A chopper full of French soldiers has already flown overhead on its way to safety, offering her, Manuel and her duplicitous husband, André (Christopher Lambert), one last chance to get out. In one of several touches of surrealism that undermine the naturalistic surface of the film, Maria and the helicopter pilot utter exactly the same dismissive line about each other: "These dirty whites! We risk our lives for them! They don't deserve this beautiful country!"

Claire Denis is almost the perfect case study in how much film culture has shifted over the last 40 years. If this were 1970 and she had made the pictures she's made now, she'd be an international celebrity -- perhaps not as highly regarded as Bergman or Kurosawa, but on the same level as, say, Truffaut or Antonioni. (Could a female director have been that famous then? We'll table that conversation for another time.) As things stand, even veteran art-house moviegoers likely remember her 1988 hit "Chocolat" (also set in Africa) and are perhaps aware that she's made other films. Sure, if you belong to the tiny subculture of people like me who go to film festivals, you no doubt have a highly developed opinion about her. But the fact is that her movies aren't even widely popular in France, let alone anywhere else.

This isn't entirely the public's fault. As I've suggested, Denis isn't the most audience-friendly filmmaker. Indeed, she's a leading figure in a generation of European directors born after World War II who seem to have little or no interest in addressing a mass audience. Her films address both the post-colonial realities of contemporary Europe and the painful history of European involvement in Africa, when most of us, most of the time, would probably rather see a romantic comedy. But from "Chocolat" through the Parisian nightscape of "I Can't Sleep," the French Foreign Legion drama "Beau Travail," the horrifying vampire saga of "Trouble Every Day" and the heartbreaking, economical father-daughter story "35 Shots of Rum" (which I think is her masterpiece to date), Denis creates movies that get under your skin as they play out Europe's bad dreams and bad conscience. She's something like the 21st-century answer to Joseph Conrad.

If I'm making "White Material" sound like a total bummer, well, at least you know what you're in for. It's a disorientingly beautiful movie at times, which promises -- as Denis always does, I think -- that human madness and human love will balance each other out, in the fullness of time. No director has ever gotten more out of Isabelle Huppert, always an easy actress to admire but never an easy one to like, which is a perfect way to describe the noble, contemptible and perhaps certifiable Maria.

Having said I don't blame the audience for Claire Denis' relative obscurity, or for the fact that "White Material" will come and go in America with almost nobody noticing, let me take it back again. We've been trained to fear and flee any work of art that strikes us as boring or confusing -- or, more precisely, that seems opaque and doesn't tell us what to think. (Works that bore or confuse us with assaultive pyrotechnics, on the other hand, are golden.) I'll save my treatise on the creative importance of boredom for another time. But when Denis asks her audience to sort out the meaning of her movies for itself, or interrogate its own prejudices, she's fighting yesterday's battle. Where today's battle lies, in an age when the pop-culture audience has become more powerful but less adventurous than ever before, I don't pretend to know.

"White Material" is now playing at the IFC Center and Lincoln Plaza Cinemas in New York, with more cities to follow. It's also available on-demand, via IFC In Theaters, from cable and satellite providers.