Steele may be out as GOP head 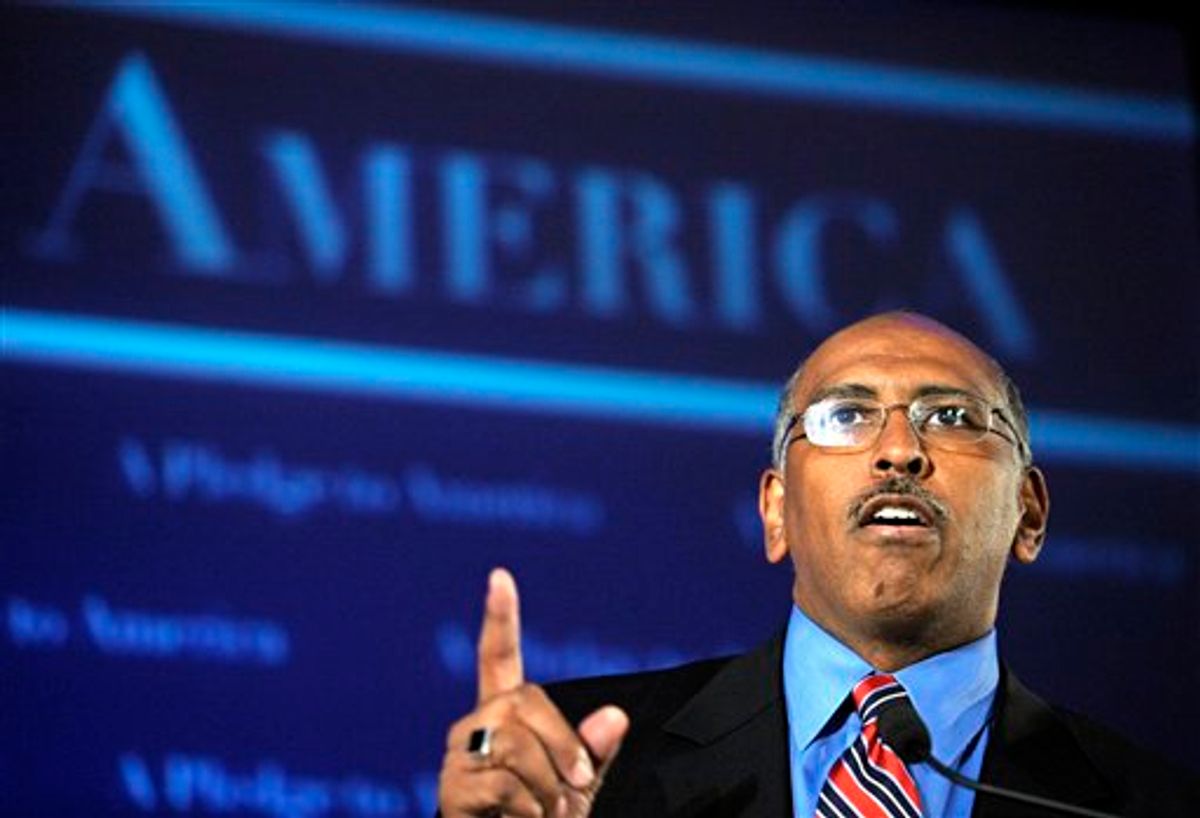 FILE - In this Nov. 2, 2010 file photo, Republican National Committee Chairman Michael Steele speaks during an election night gathering hosted by the National Republican Congressional Committee, in Washington. GOP activists are making an aggressive push to recruit a challenger to Steele, whose tenure as the central party's chief has been pocked with controversy and has been a period that some leaders are eager to put behind them. (AP Photo/Cliff Owen) (AP)
--

A significant bloc of Republican National Committee members wants embattled chairman Michael Steele to step aside, but the rank and file have failed to settle on a clear alternative, according to Associated Press interviews with committee members.

More than four dozen interviews with members of the 168-member central committee found fear that a badly damaged Steele could emerge from the wreckage of a knockdown, drag-out fight to head the party as it challenges President Barack Obama in 2012. While most agree that Steele's time has been rough -- and costly -- the members also recognize that a leadership fight could overshadow gains that Republicans made in the midterm elections.

With balloting set to take place in just two months, many just want Steele to go.

"You can't keep spending the kind of money they're spending every month just to operate the RNC," said committee member Ada Fisher of North Carolina. "I would hope he would step aside."

"The question is who should be hired for the next two years, It's not a matter of firing anybody," said James Bopp, a committee member from Indiana who holds great sway among social conservatives on the panel. "I just don't think Steele has performed at the level we need for the presidential cycle."

In interviews with 51 committee members, 39 said they preferred Steele not be on the ballot when they meet near Washington in mid-January to pick their leader.

For his part, Steele hasn't said whether he will pursue the 85-vote majority needed for a second term. Already, members have been hearing from others interested in that quest.

Michigan committeeman Saul Anuzis has announced his candidacy. Former RNC strategist Gentry Collins, an operative who is warmly regarded among RNC members, has formed a committee to explore a chairman's race. So, too, have Missouri chairwoman Ann Wagner and former Bush administration official Maria Cino.

A group of committee members, meanwhile, is courting Wisconsin GOP chairman and RNC lawyer Reince Priebus, who ran Steele's 2009 bid for chairman but has not ruled out challenging him.

Connecticut chairman Chris Healy also is weighing a run. And several GOP governors have urged Republican Governors Association executive director Nick Ayers to seek the position, a suggestion he has been reluctant to embrace.

Steele, too, is talking to committee members, highlighting his role in the Republican landslide.

Looking ahead, the GOP focus is voting Obama out of office. To do that, Republicans need a coherent message, a strong party apparatus and a sizable account that Steele has seemed uninterested in building.

When Collins resigned from the national committee last week, he wrote a scathing letter questioning the ability of the RNC, under Steele, to lead the charge against the Democrats.

"Sadly, if left on its current path, the RNC will not be a productive force in the 2012 campaign to deny President Obama a second term, retain our House majority and elect a Senate majority," he wrote to the party's leadership.

The letter was a playbook for any of Steele's potential rivals, noting that the chairman had maxed out a $15 million credit line the committee had approved.

"I think the Gentry Collins letter made it impossible for Mike Steele to be re-elected," said Virginia committee member Morton Blackwell, who is backing Anuzis.

Steele started the job with a $23 million surplus; the RNC raised more than $79 million this year and has spent all of it. Some went to places that previously saw little RNC cash or interest, including five U.S. territories that each has three votes on the central committee.

"There are two things that a chairman needs to understand. They're going to start with a deficit. That's fact. They also will need to figure out how to get the major donors back on board because they weren't on board last time," said Linda Herren, a committee member from Georgia. "They still helped elect Republicans. But it was not through the RNC."

Third-party groups, led by veteran GOP operatives Karl Rove and Ed Gillespie, raised in a few months almost as much as the RNC has since January 2009. Those dollars fueled blistering television ads that helped Republicans to victory but were an embarrassment to the RNC.

During Republican governors' private meetings last week in California, a consensus emerged that Steele must leave his post when his term expires. Governors returned to their states and this week shared that message with their committee members, telling them that retaking the White House requires someone else.

Others say they still like the chairman -- and his doting attention, his speedy replies -- but believe it's time for him to go.

"He's a wonderful man. He's done a good job," said Cindy Costa, a committee member from South Carolina. "But it would be better for him -- and I want the best for him -- to step down knowing he gave an honest shot and did a good job this election cycle."