The FBI successfully thwarts its own Terrorist plot 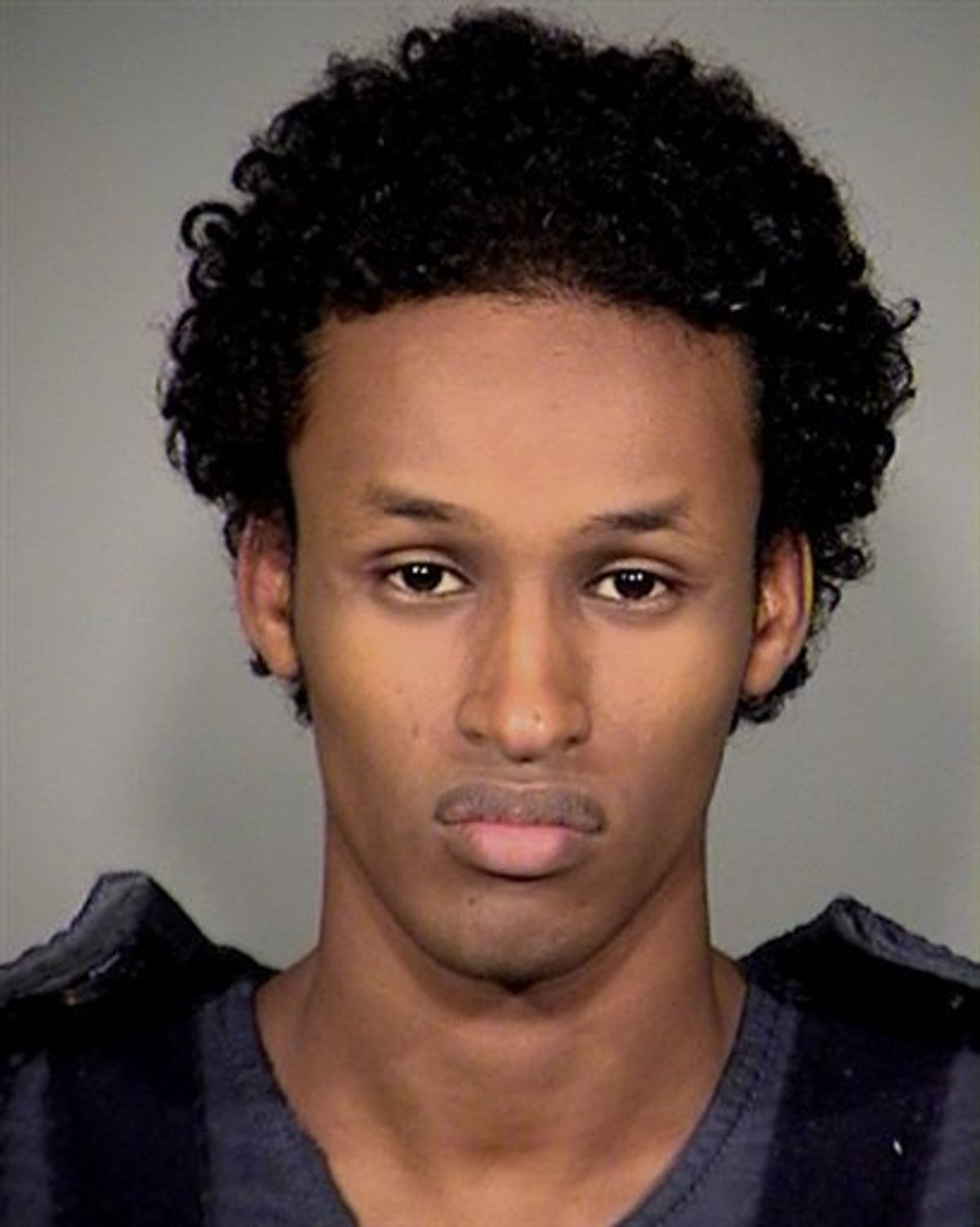 ** CORRECTS NAME OF COUNTY TO MULTNOMAH INSTEAD OF MAUTHNOMAH ** This image released Nov. 27, 2010 by the Multnomah County Sheriff's Office shows Mohamed Osman Mohamud, 19. Federal agents in a sting operation arrested the Somali-born teenager just as he tried blowing up a van full of what he believed were explosives at a crowded Christmas tree lighting ceremony, federal authorities said. The bomb was a fake supplied by the agents and the public was never in danger, authorities said. (AP Photo/Multnomah County Sheriff's Office) (AP)
--

The FBI is obviously quite pleased with itself over its arrest of a 19-year-old Somali-American, Mohamed Osman Mohamud, who -- with months of encouragement, support and money from the FBI's own undercover agents -- allegedly attempted to detonate a bomb at a crowded Christmas event in Portland, Oregon.  Media accounts are almost uniformly trumpeting this event exactly as the FBI describes it.  Loyalists of both parties are doing the same, with Democratic Party commentators proclaiming that this proves how great and effective Democrats are at stopping The Evil Terrorists, while right-wing polemicists point to this arrest as yet more proof that those menacing Muslims sure are violent and dangerous.

What's missing from all of these celebrations is an iota of questioning or skepticism.  All of the information about this episode -- all of it -- comes exclusively from an FBI affidavit filed in connection with a Criminal Complaint against Mohamud.  As shocking and upsetting as this may be to some, FBI claims are sometimes one-sided, unreliable and even untrue, especially when such claims -- as here -- are uncorroborated and unexamined.  That's why we have what we call "trials" before assuming guilt or even before believing that we know what happened:  because the government doesn't always tell the complete truth, because they often skew reality, because things often look much different once the accused is permitted to present his own facts and subject the government's claims to scrutiny.  The FBI affidavit -- as well as whatever its agents are whispering into the ears of reporters -- contains only those facts the FBI chose to include, but omits the ones it chose to exclude.  And even the "facts" that are included are merely assertions at this point and thus may not be facts at all.

It may very well be that the FBI successfully and within legal limits arrested a dangerous criminal intent on carrying out a serious Terrorist plot that would have killed many innocent people, in which case they deserve praise.  Court-approved surveillance and use of undercover agents to infiltrate terrorist plots are legitimate tactics when used in accordance with the law.

But it may also just as easily be the case that the FBI -- as they've done many times in the past -- found some very young, impressionable, disaffected, hapless, aimless, inept loner; created a plot it then persuaded/manipulated/entrapped him to join, essentially turning him into a Terrorist; and then patted itself on the back once it arrested him for having thwarted a "Terrorist plot" which, from start to finish, was entirely the FBI's own concoction.  Having stopped a plot which it itself manufactured, the FBI then publicly touts -- and an uncritical media amplifies -- its "success" to the world, thus proving both that domestic Terrorism from Muslims is a serious threat and the Government's vast surveillance powers -- current and future new ones -- are necessary.

There are numerous claims here that merit further scrutiny and questioning.  First, the FBI was monitoring the email communications of this American citizen on U.S. soil for months (at least) with what appears to be the flimsiest basis: namely, that he was in email communication with someone in Northwest Pakistan, "an area known to harbor terrorists" (para. 5 of the FBI Affidavit).  Is that enough to obtain court approval to eavesdrop on someone's calls and emails?  I'm glad the FBI is only eavesdropping with court approval, if that's true, but certainly more should be required for judicial authorization than that.  Communicating with someone in Northwest Pakistan is hardly reasonable grounds for suspicion.

Second, in order not to be found to have entrapped someone into committing a crime, law enforcement agents want to be able to prove that, in the 1992 words of the Supreme Court, the accused was "was independently predisposed to commit the crime for which he was arrested."  To prove that, undercover agents are often careful to stress that the accused has multiple choices, and they then induce him into choosing with his own volition to commit the crime.  In this case, that was achieved by the undercover FBI agent's allegedly advising Mohamud that there were at least five ways he could serve the cause of Islam (including by praying, studying engineering, raising funds to send overseas, or becoming "operational"), and Mohamud replied he wanted to "be operational" by using exploding a bomb (para. 35-37).

But strangely, while all other conversations with Mohamud which the FBI summarizes were (according to the affidavit) recorded by numerous recording devices, this conversation -- the crucial one for negating Mohamud's entrapment defense -- was not.  That's because, according to the FBI, the undercover agent "was equipped with audio equipment to record the meeting.  However, due to technical problems, the meeting was not recorded" (para. 37).

Thus, we have only the FBI's word, and only its version, for what was said during this crucial -- potentially dispositive -- conversation.  Also strangely:  the original New York Times article on this story described this conversation at some length and reported the fact that "that meeting was not recorded due to a technical difficulty," but the final version omitted that, instead simply repeating the FBI's story as though it were fact:  "undercover agents in Mr. Mohamud’s case offered him several nonfatal ways to serve his cause, including mere prayer. But he told the agents he wanted to be 'operational,' and perhaps execute a car bombing."

Third, there are ample facts that call into question whether Mohamud's actions were driven by the FBI's manipulation and pressure rather than his own predisposition to commit a crime.  In June, he attempted to fly to Alaska in order to work on a fishing job he obtained through a friend, but he was on the Government's no-fly list.  That caused the FBI to question him at the airport and then bar him from flying to Alaska, and thus prevented him from earning income with this job (para. 25).  Having prevented him from working, the money the FBI then pumped him with -- including almost $3,000 in cash for him to rent his own apartment (para. 61) -- surely helped make him receptive to their suggestions and influence.  And every other step taken to perpetrate this plot -- from planning its placement to assembling the materials to constructing the bomb -- was all done at the FBI's behest and with its indispensable support and direction.

It's impossible to conceive of Mohamud having achieved anything on his own.  Before being ensnared by the FBI, the only tangible action he had taken was to write three articles on "fitness and jihad" for the online magazine Jihad Recollections.  At least based on what is known, he had no history of violence, no apparent criminal record, had never been to a training camp in Afghanistan, Pakistan or anywhere else, and -- before meeting the FBI -- had never taken a single step toward harming anyone.  Does that sound like some menacing sleeper Terrorist to you?

Finally, there is, as usual, no discussion whatsoever in media accounts of motive.  There are several statements attributed to Mohamud by the Affidavit that should be repellent to any decent person, including complete apathy -- even delight -- at the prospect that this bomb would kill innocent people, including children.  What would drive a 19-year-old American citizen -- living in the U.S. since the age of 3 -- to that level of sociopathic indifference?   He explained it himself in several passages quoted by the FBI, and -- if it weren't for the virtual media blackout of this issue -- this line of reasoning would be extremely familiar to Americans by now (para. 45):

Undercover FBI Agent:  You know there's gonna be a lot of children there?

Mohamud:  Yeah, I know, that's what I'm looking for.

Mohamud:  No, just for, in general a huge mass that will, like for them you know to be attacked in their own element with their families celebrating the holidays.  And then for later to be saying, this was them for you to refrain from killing our children, women . . . . so when they hear all these families were killed in such a city, they'll say you know what your actions, you know they will stop, you know.  And it's not fair that they should do that to people and not feeling it.

And here's what he allegedly said in a video he made shortly before he thought he would be detonating the bomb (para. 80):

We hear the same exact thing over and over and over from accused Terrorists -- that they are attempting to carry out plots in retaliation for past and ongoing American violence against Muslim civilians and to deter such future acts.  Here we find one of the great mysteries in American political culture:  that the U.S. Government dispatches its military all over the world -- invading, occupying, and bombing multiple Muslim countries -- torturing them, imprisoning them without charges, shooting them up at checkpoints, sending remote-controlled drones to explode their homes, imposing sanctions that starve hundreds of thousands of children to death  -- and Americans are then baffled when some Muslims -- an amazingly small percentage -- harbor anger and vengeance toward them and want to return the violence.   And here we also find the greatest myth in American political discourse:  that engaging in all of that military aggression somehow constitutes Staying Safe and combating Terrorism -- rather than doing more than any single other cause to provoke, sustain and fuel Terrorism.

UPDATE:  A very similar thing happened last month when the FBI announced that it had arrested someone who was planning to bomb the DC Metro system when, in reality, "the only plotting he did was in response to instructions from federal agents he thought were accomplices."  That concocted FBI plot then led to the Metro Police announcing a new policy of random searches of passengers' bags.

Meanwhile, in Oregon, the mosque sometimes attended by Mohamud was victimized today by arson.  So the FBI did not stop any actual Terrorist plots, but they may have helped inspire one.