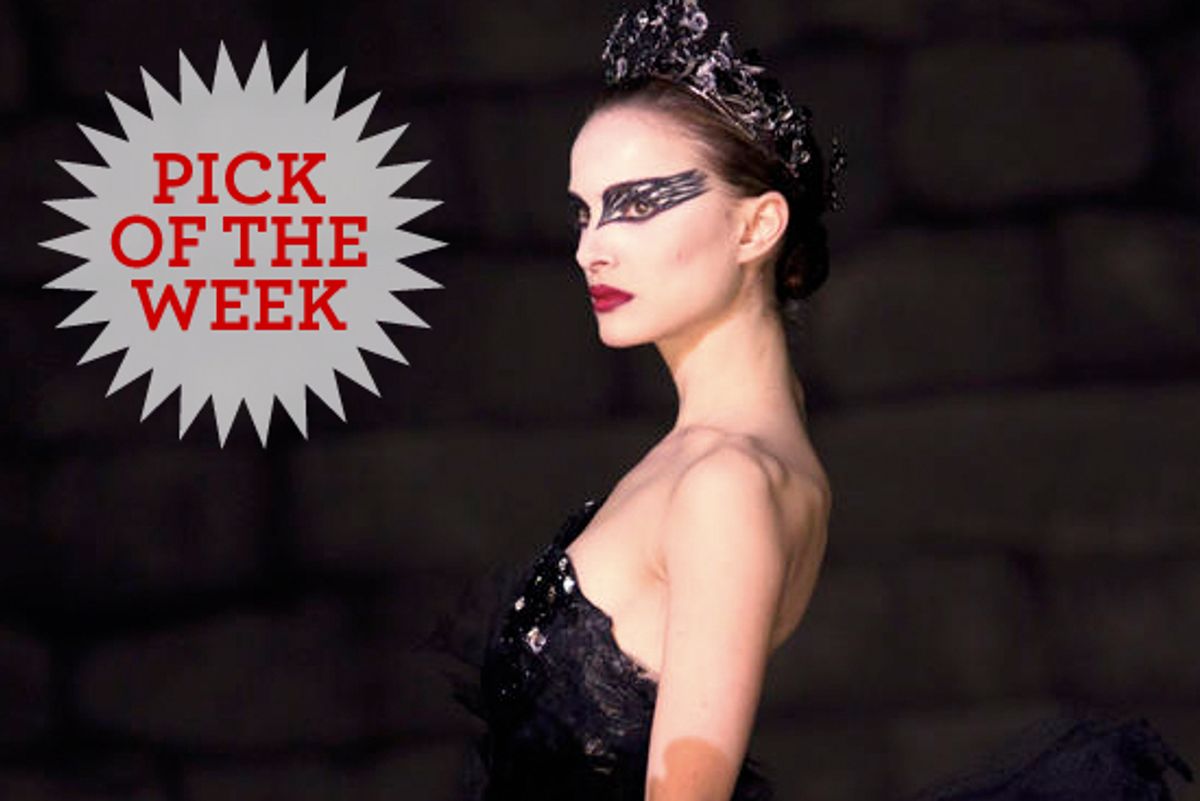 Having seen Darren Aronofsky's dazzling and disorienting ballet thriller "Black Swan" a second time, I'll stick to my original position that it's one of the best movies of the year. Synthesizing Aronofsky's previous work and foregrounding a breakthrough star performance from Natalie Portman as its tormented protagonist, this is a marvelous construction that's in line for multiple Oscar nominations: Portman, Vincent Cassel and Barbara Hershey for acting awards, Matthew Libatique for his amazing hand-held cinematography, Thérèse DePrez for production design, Andrew Weisblum for editing and Clint Mansell for a mesmerizing score that blends techno and Tchaikovsky.

Aronofsky himself should walk away with the Academy's directing prize, in large part because he takes a clumsy, crazy script -- which seems to combine "The Red Shoes," "All About Eve" and a woman-centric rewrite of Aronofsky's last film, "The Wrestler" -- and makes a memorable near-masterpiece out of it. A second viewing also exposes some of "Black Swan's" flaws, most notably the fact that Cassel's character, a ramrod-straight martinet choreographer modeled after the legendary George Balanchine, is largely in the story to provide explanatory footnotes: "You must complete the metamorphosis into your evil twin!" (On the other hand, watching Cassel's perfect carriage, his hips and shoulders exactly aligned as he prowls the rehearsal room like a medium-size predatory cat, is pretty much its own reward. Even getting to use the word "carriage," in that sense, is a kick.)

There's plenty of room for legitimate debate on "Black Swan," and a lot of it will surround the question of whether it's yet another exploitative male-crafted thriller about a female nutcase or something more ambitious and more universal than that. I'm not sure there's a right or wrong answer -- Aronofsky is deliberately employing the conventions of misogynistic genre movies, while identifying strongly with Portman's Nina Sayers and her insane, impossible quest for artistic perfection. I'm never quite sure how I feel about thrillers with art-film ambitions: The film-snob part of me believes they're limited by the traps, tricks and gimmicky resolutions demanded by the genre, while the populist part of me honors the fact that they're delivering ambitious cinema in a pop context. (One could have exactly this discussion about, say, "Vertigo" -- in fact, I recently did.) We'll be talking about this one all winter, and I look forward to your feedback. Here's my initial review from the Toronto premiere, stripped down for context and clarity:

"Black Swan" is one of those movies that demand big adjectives. It's outlandish and melodramatic and spectacular. It aspires to be a 1970s-style event movie, of the kind nobody makes anymore -- a movie that will be chattered about at upscale cocktail parties (the kinds of parties nobody has anymore) and also draw large audiences who just want to be terrified and aroused and told a fantastic story. Set entirely within the cloistered, sadomasochistic world of ballet, it definitely won't be everybody's cup of tea, and those who don't like it can make a great show of being populists bored to tears by the tedious self-involvement of high culture.

That will not be me. I'm here to tell you that I found "Black Swan's" tale of madness, music and sexual repression utterly overpowering from the first few frames of the film. I forgot about the notebook in my lap and totally abandoned that sense I sometimes get that I'm trying to write the review in my head before the movie's over. I was completely swept up and just wanted to ride along on Aronofsky's hallucinatory journey with Nina Sayers (Natalie Portman), a rising young ballerina who emerges as the star of a leading New York ballet company just as she may also be undergoing a mental breakdown.

I will happily acknowledge my bias, in that I'm a pretty big ballet fan (although no aficionado) and an even bigger fan of "The Red Shoes," the Michael Powell-Emeric Pressburger masterpiece from 1948 that Aronofsky and his screenwriters (Mark Heyman, Andrés Heinz and John McLaughlin, from Heinz's original story) are echoing or channeling or otherwise not-exactly-remaking here. I'll leave it to genuine balletomanes to judge the quality of Portman's dancing, but I can tell you that she's had solid training and that Aronofsky and cinematographer Matthew Libatique make her look sensational. "Black Swan" features some of the most magnificent ballet sequences ever created for cinema, but Nina is supposed to be a dancer whose prodigious technique is a little cold, mechanical and even fearful. (I've heard some skepticism on this point, but the filmmakers claim that Portman did about 90 percent of her own dancing, although a professional double appears in some close-ups.)

Nina is one of those girls who have been trained for ballet stardom since early childhood, and she has embraced that as her sole purpose in life. She lives with her archetypal adoring-yet-smothering stage mom (a nuanced, borderline-creepy Barbara Hershey) in a small Upper West Side apartment, and she's painfully shy around the other girls in the corps, who have boyfriends and go out to nightclubs and do the other things young women in Manhattan are likely to do. Nina claims she isn't a virgin, but she's doing an awfully good impression of one, and when the wandering eye of company impresario Thomas Leroy (French actor Vincent Cassel, superb as usual) alights on her, everyone knows what to expect.

Ambiguous, sexualized master-student relationships abound in the world of dance (not to mention the world, period) but Cassel's character is clearly meant to evoke legendary choreographer George Balanchine, who tended to view the young female dancers at New York City Ballet as his private hunting preserve. For Cassel's Leroy (as, I believe, for Balanchine) it's all part of the artistic process; if Nina is going to dance both the pure and virginal White Swan and the dark, seductive Black Swan in Tchaikovsky's "Swan Lake," she's going to have to learn some things about herself she doesn't know yet. He's just the guy to teach her.

But strange stuff starts to happen on the way to what ought to be a simple conquest. Elevating Nina to prima ballerina means that Leroy must cast aside Beth MacIntyre (Winona Ryder, in a brief but memorable cameo), who is both the company's reigning star and Leroy's longtime lover. Perhaps deliberately, Leroy also propels Nina into a tense, rivalrous friendship with the company's newest arrival, Lily (Mila Kunis), a tattooed free spirit from the West Coast who lacks Nina's drive and precision but has charisma and sexual energy to burn. And by the time Lily lures Nina away from Mom's apartment for a long night of booze, Ecstasy, non-ballet-oriented dancing and some steamy bisexual exploration, we've already cottoned on to the dangerous truth that Nina can't tell the difference between the real world and what's in her head. (Aronofsky offers precise visual and auditory cues that demarcate reality from fantasy, but I should say no more than that.)

Nina has troubling dreams and a history of hurting herself (we gather) and a tendency not to recognize the girl she sees in mirrors, windows and other reflective surfaces. She's haunted by every other woman in the movie -- by her mother, by Beth, by Lily, and especially by the woman she sees occasionally on the street or the subway train, the one who looks exactly like her, but is darker, sexier, more dangerous. "Black Swan" sometimes has the buzz and chill of a classic horror film, and definitely contains elements of a clinical, Hitchcockian yarn about a nutso girl who damages other people and herself. But there's a lot more heart and beauty to it, a lot more Balanchine and "Swan Lake" and "The Red Shoes," than that description implies.

Aronofsky's fable about Nina's quest to transform herself from the White Swan into the Black Swan captures so much about the physical reality of ballet -- the blood and bruises, the tortured toes and twisted ligaments -- that it feels intimate, sympathetic, even loving. It's a terrible cliché to say that a movie about artistic creation is itself an autobiography of its creator, but this is one of those rare movies in which director, actor, character and story all fuse into a big and powerful allegory. "Black Swan" certainly has its flaws and limitations -- it's overcooked and implausible, and I'm not sure its ending lives up to the film as a whole. But it's a magnificent blend of pop and art cinema, the breakthrough we've been waiting for from both Portman and Aronofsky, and a must-see film that people will argue about all winter.