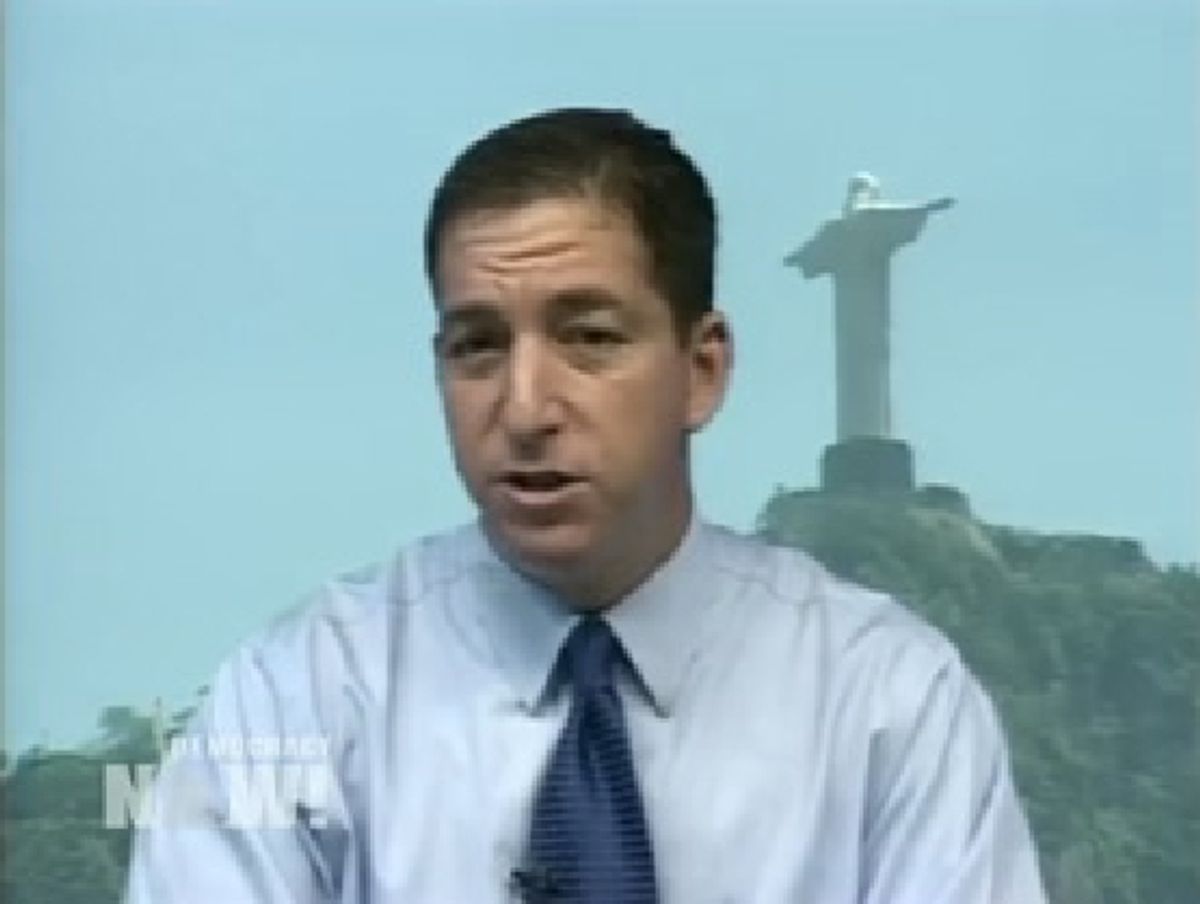 I was on Democracy Now this morning debating WikiLeaks with Steven Aftergood, the long-time transparency advocate with Federation for American Scientists and Secrecy News, and a vociferous critic of WikiLeaks.  Because of his harsh and continuous deunciations of the group, Aftergood has been held up by many media outlets such as Newsweek as evidence that even transparency campaigners condemn them.  This debate, in my view, highlights the core disputes surrounding WikiLeaks quite vividly and is thus worth watching.  One added note:  Democracy Now, unsurprisingly, has been providing some of the best and most informative coverage of the WikiLeaks disclosures; see here (and scroll down) for the links to their superb reporting and interviews all week long:

UPDATE:  I recorded a 30-minute podcast discussion on Wednesday with MSNBC's Dylan Ratigan regarding WikiLeaks and, especially, the media's reaction to it.  Dylan is always interesting and -- for those who haven't yet had their fill of my talking about WikiLeaks this week -- this 30-minute discussion is, I think, worthwhile.

(1) The transcript of my debate with Aftergood is here.

(2) I didn't address Aftergood's claim that WikiLeaks had "published what I think is probably the only actual blueprint of a nuclear fission device that has been made available online" because I had never heard that accusation before and, at least to my knowledge, it was not even mentioned in any of Aftergood's prior criticisms of the group.  And strangely, I was unable to find anything about this claim afterward through Google:  something one would not expect to be the case for an event as significant as he suggested it was.

But then, after I asked in the comment section here, commenters found this New Scientist article explaining that the design which WikiLeaks published was "from 1947," that "much of the information had been in the public domain since 2002 if anyone had cared to seek it out," that the British government made clear it was apathetic about the "disclosures," and that a book published shortly thereafter by a Brazilian physicist contained much more updated information about the fission process.  In other words, the implication of Aftergood's complaint was wildly exaggerated.

(3) Daniel Ellsberg writes to Amazon to disaassociate himself with the company and to condemn its "cowardice."

(4) Yesterday, GOP Rep. Ron Paul spoke out in defense of Julian Assange and WikiLeaks ("In a free society, we are supposed to know the truth.  In a society where truth becomes treason, we are in big trouble").  Similarly, former Bush adviser Matthew Dowd has an extraordinary column in National Journal slamming the Government for persecuting WikiLeaks and trying to hide everything it does at exactly the same time it invades our communications without very many limits:

As I was sitting with my three grown sons over the post-Thanksgiving weekend watching football at their place (where they have lived together for nearly a year without a major fight, the place burning down, or the police showing up), my oldest son, who served in the Army for five years and was deployed in Iraq for nearly a year and half, turned to me and asked, "When as a country did we become a place where the government gets upset when its secrets are revealed but has no problem knowing all our secrets and invading our privacy?" . . . .

In Washington’s polarized political environment, Republicans and Democrats seem to agree on a few things: That the government, in the name of fighting terrorism, has the right to listen in on all of our phone conversations and read our e-mails, even if it has no compelling reason for doing so. That the government can use machines at the airport that basically conduct the equivalent of strip searches of every passenger. That the government, for as long as it wants, can withhold any information from the public that it decides is in the national interest and is classified. And that when someone reveals this information, they are reviled on all sides, with the press corps staying silent. . . . .

When did we decide that we trust the government more than its citizens? And that revealing the truth about the government is wrong? And why is the media complicit in this? Did we not learn anything from the run-up to the Iraq war when no one asked hard questions about the justifications for the war and when we accepted statements from government officials without proper pushback? . . .

And shouldn’t news organizations be defending WikiLeaks and doing some soul-searching of their own about why they aren’t devoting more resources to the search for the truth? Why is it that the National Enquirer and Internet blogs sometimes seem better than they are at finding out what’s really going on?

That is the crux of the matter.  As Digby says, what Dowd is describing -- you have no right to know what the Government does and those who expose its activities are traitors and criminals, all while the Government demands to know everything you do and say and uses sprawling technology to invade your communications at will -- is "called authoritarianism."  I didn't think my contempt for the establishment media could grow any further, but watching this week as most of them not merely joined in, but took the lead, in reviling WikiLeaks and calling for Assange's destruction for the "crime" of shedding light on what the American Government does -- which they still have the audacity to claim is their role -- has proven me wrong.  It has indeed increased (by very stark contrast, here's how real journalists -- the advocacy group Reporters Without Borders -- respond to the attack on WikLeaks).

(5) Speaking of authoritarianism, the loathsome Dianne Feinstein (D-CA) -- the National-Security-State-venerating Chairwoman of the Senate Intelligence Committee who lives off her defense contractor-husband's vast wealth -- announced that she supports re-writing and expanding the Espionage Act of 1917 to make it easier to prosecute WikiLeaks and those like them; as always, Feinstein abuses her role as Chair of the "oversight" Committee not to scrutinize and limit the abuses of the intelligence community but to protect them at all costs, as that's where her source of wealth and power lie.  She was responding to yesterday's announcement that Joe Lieberman -- joined by GOP Senators Scott Brown and John Ensign -- introduced a bill intended to make it easier to prosecute Assange.  Exactly as Dowd says, when it comes to authoritarian punishments for those who dare to expose what the U.S. Government does, the mindset is entirely bipartisan.