The newspaper uses James Franco, Natalie Portman and other stars in an artsy-fartsy, captivating online feature 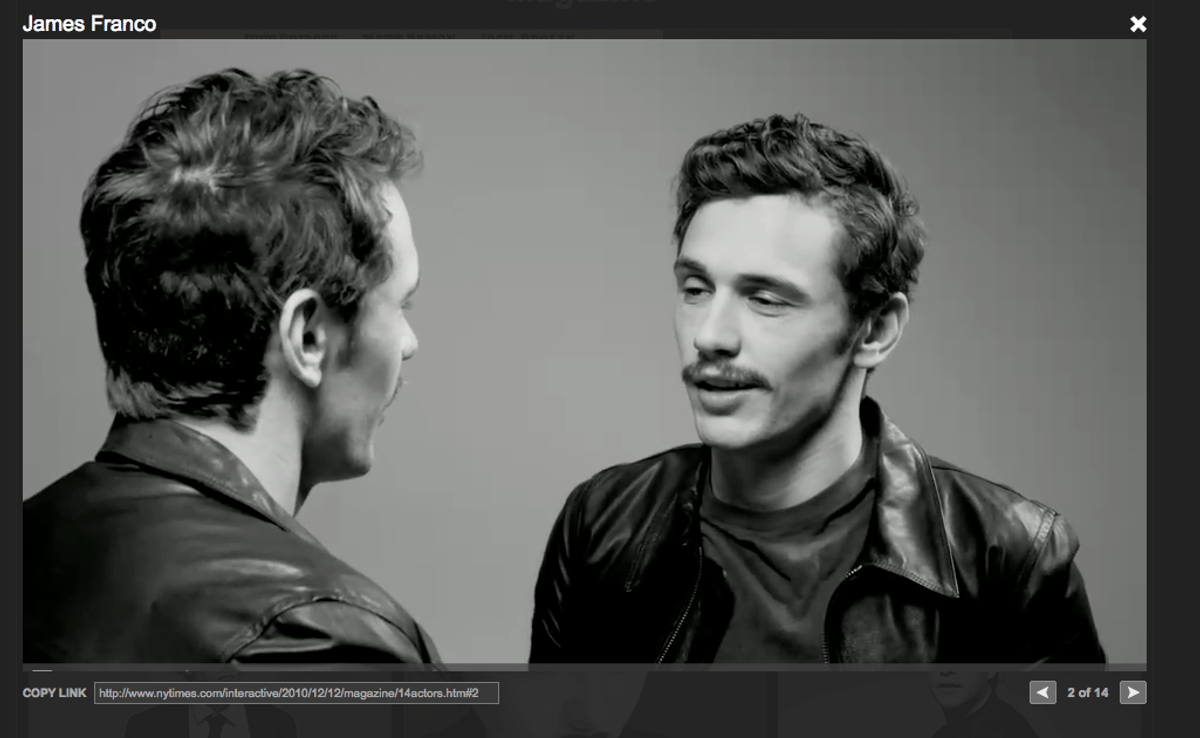 James Franco performs in a video for the New York Times.
--

Would you like to watch bullets ricochet off Jesse Eisenberg's head? Would you like to see James Franco make out with himself? Would you like to sit in your study, swirling your snifter of Rémy Martin and enjoy Act-ORS, Act-ING? Why of course you would, dahhhhling. Take some time, then, for what might prove to be the strangest few minutes of your day as the New York Times presents 14 esteemed actors in a series of silent, black-and-white "decisive moments." Holy Cartier-Bresson!

Directed by Norwegian photographer Solve Sundsbo, the videos are a dynamic departure from the Times' annual "Great Performers" portfolio. Instead, in the space of roughly a minute each, the always great Tilda Swinton does a hardcore homage to "The Passion of Joan of Arc," Vincent Cassel channels his inner Gene Kelly, and Natalie Portman mournfully strips down to her skivvies, all to a hauntingly spare soundtrack courtesy of Owen Pallett.

It's so pretentious, so snootily "The New York Times just adores the cinema," I can almost feel the terrorists hating us from here. You'll find no real comic relief here (though James Franco putting the moves on James Franco is pretty absurd), no pratfalls from Javier Bardem or Noomi Rapace. Au contraire! Acting is full of pain and Lesley Manville showing her happy-to-sad range and Matt Damon yelling.

But just when you feel the proletarian disgust rising in your throat, an elegantly terrorized Anthony Mackie (the sole African-American in the lot) gives a tip of the hat to "North by Northwest," and a gaunt Michael Douglas sits magisterially in a leather chair and just … thinks. It's a knockout 43 seconds, and his first performance since going public with his cancer diagnosis last summer. Is he acting or merely allowing us access to his introspection? We'll never know. And his enigmatic gaze, in the midst of much New York Times and A-list actors taking themselves too seriously, reminds us of the power of a great performer, revealing his own decisive moment.