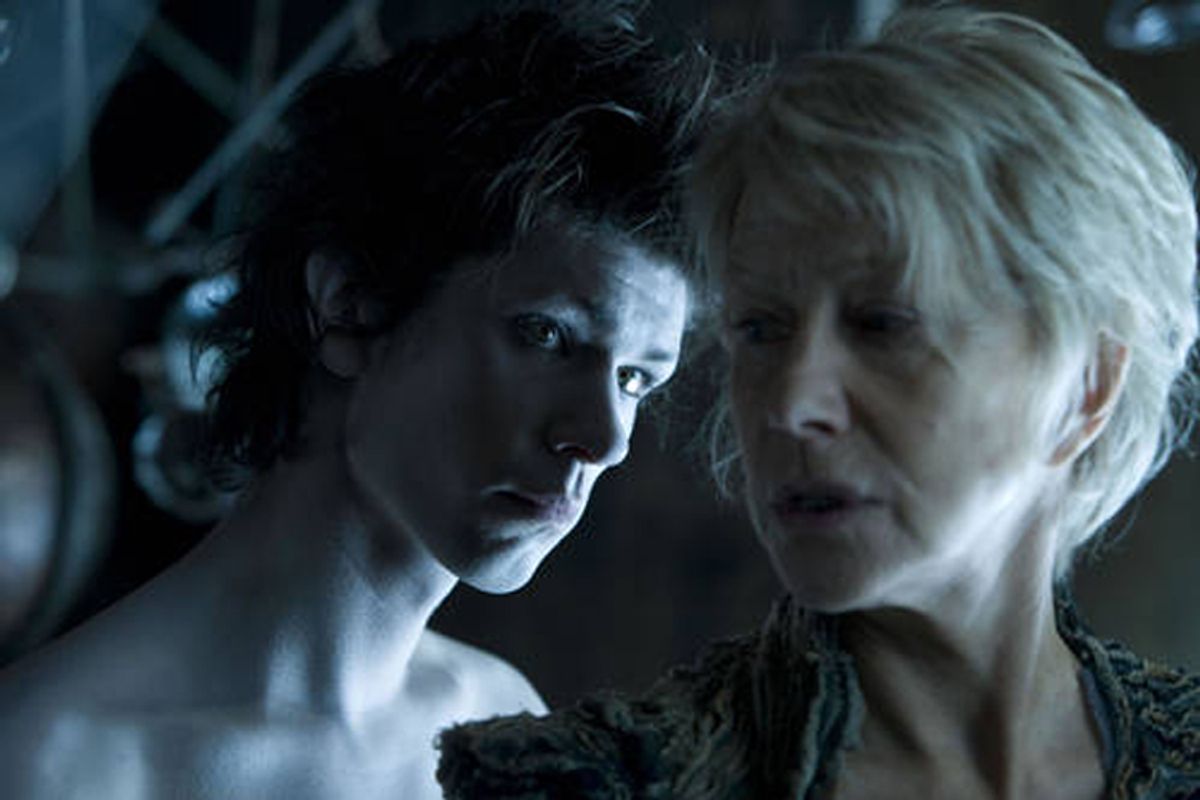 Ben Whishaw and Helen Mirren in "The Tempest"
--

It's difficult, but not impossible, to wreck a Shakespeare play completely, and if there's a reason to be grateful for Julie Taymor's muddled, middling production of "The Tempest," it lies in the fact that she doesn't do that. A wizard of the Broadway stage who created the long-running "Lion King" musical (and the now-previewing Spider-Man musical), Taymor has what you might call a mixed record as a film director: I mean, everything she makes is a mixed bag. (Her last two movies were the Beatles musical "Across the Universe" in 2007, and the biopic "Frida" five years earlier. Make sense of that, if you can.) This is her second big-screen attack on the Bard, and it's a whole lot friendlier than her gory, deranged "Titus" from a decade ago.

Which is not to say it's, like, amazing or anything. Taymor approaches Shakespeare's last play (unless it isn't; that issue, like everything else about the greatest dramatist of the English tradition, is disputed) with great respect, staying largely true to its impressive text and general narrative outline. Her interpretations and interpolations range from brilliant to indifferent to extremely silly; as Taymor surely knows, there's nothing especially revolutionary in asking Helen Mirren to play the central role of Prospera (i.e., Prospero), the deposed duke/duchess of Milan turned white-magic practitioner. (Vanessa Redgrave played a gender-neutral Prospero on the London stage 10 years ago.) What it does get you is, well, Helen Mirren performing one of Shakespeare's most complicated characters, which can make up for a lot of other problems.

The thing about "The Tempest" is that there's almost no way to bring something new to this tremendously allegorical and ambiguous play, which is highly self-conscious and very much unlike anything else Shakespeare wrote -- is it a comedy? a romance? a "masque"? -- and may be the most reinterpreted, overanalyzed and deconstructed literary work in the Western tradition. Since the play was first performed in the 17th century, viewers have seen Prospero's final decision to abjure his "rough magic" and break his staff as a metaphor for Shakespeare's own decision to end his playwriting career. More recently, Prospero's relationship with Ariel, his "airy spirit" servant, and Caliban, his deformed, island-born slave, have been understood in terms of colonial and/or psychoanalytic theory: love/hate, black/white, North/South, ego/Id.

I suppose in offering a traditional rendering, or nearly so -- it's set on an island, with characters more or less in Elizabethan dress, Ariel (Ben Whishaw) as a naked holographic sprite and Caliban (Djimon Hounsou) as a near-naked, mud-encrusted African -- Taymor is allowing us to pick up the story and run in whichever direction we choose. But I can't help wishing this "Tempest" had more of a distinctive personality. Instead, it waxes and wanes with its cast, some of whom are fully up to the task posed by Shakespearean dialogue and some of whom just aren't.

Hounsou gives a powerful physical performance, but simply can't be understood speaking Caliban's difficult blank verse about half the time. It's no good being a proto-Frantz Fanon colonial rebel if we can't make out what you're trying to say. (He's better when quieter, as when reassuring newcomers: "Be not afraid, the isle is full of noises/ Sounds, and sweet airs, that give delight and hurt not.") Felicity Jones and Reeve Carney, as the young lovers Miranda and Ferdinand, are merely dull. Some of the best scenes in the movie involve stage veterans like David Strathairn, Chris Cooper and Alan Cumming, playing the nefarious if subsidiary trio of King Alonso of Naples, Prospera's brother Antonio and the Iago-lite Sebastian.

If you've seen the trailers, you'll know that English comedian and not-quite movie star Russell Brand shows up as the buffoonish Trinculo, playing him as yet another of Brand's Cockney rock-star caricatures. Thing is, that fits pretty well with the dimwit character, who briefly becomes -- along with his drunken buddy Stephano (Alfred Molina) -- an instrument in Caliban's planned insurrection against Prospera's rule. Those enjoyments aside, this "Tempest" is all about Mirren, who plays the aging female mage with a mixture of conqueror's arrogance and motherly sadness, lending her final words about the rebellious Caliban -- "this thing of darkness I acknowledge mine" -- a tragic ambivalence. (She does not call him a "demi-devil" and "bastard" in the same breath, as Prospero does in the play.)

Lovely as it is to hear Mirren read some of the most challenging lines ever written in our language, Prospero does not look, to our eyes, like an entirely sympathetic figure (not that he necessarily did 400 years ago either), and making him female does not relieve him of the white man's burden. Ultimately Taymor's reading of "The Tempest" is more dutiful than exciting, and it's strangely bereft of the visual imagination and diabolical machinery for which her theatrical productions are known. Perhaps more than any other Shakespeare play, this one has evaded successful translation from stage to screen. Derek Jarman's homoerotic reimagining from 1980 and Paul Mazursky's lightweight modern-language version made two years later are all but forgotten. I admire Peter Greenaway's "Prospero's Books" for what it is, which is a self-referential digital art project using Shakespeare's text as one of its elements (along with lots of naked flesh). But none of those films really comes close to capturing the dense and nettlesome mysteries of "The Tempest," and this earnest effort doesn't either. Is "Forbidden Planet," the 1950s sci-fi reworking, with Robbie the Robot as Ariel and an invisible, perhaps imaginary Caliban, still the best movie version?