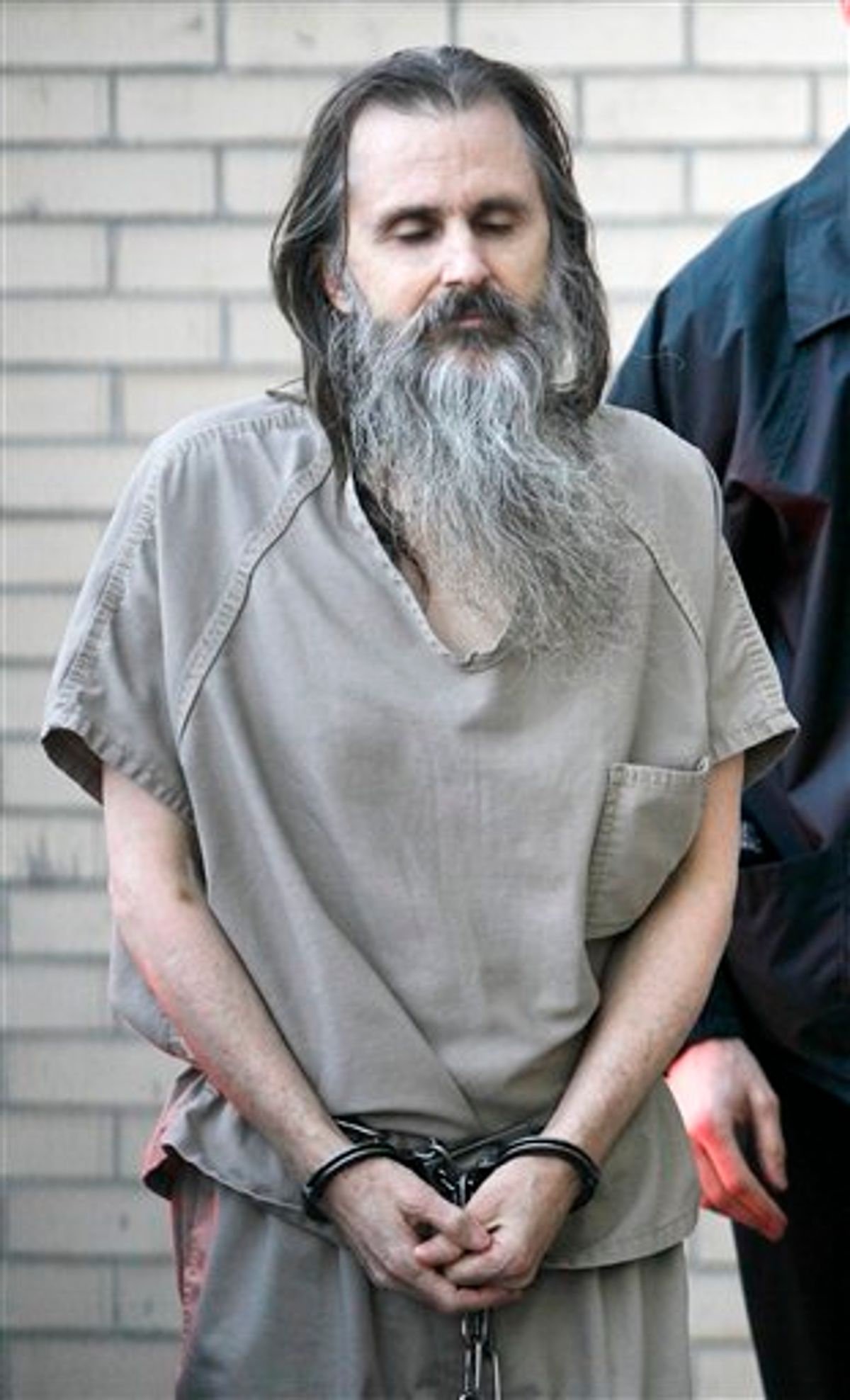 A jury found a rambling street preacher guilty Friday of the 2002 kidnapping of Elizabeth Smart in a case that has tugged at hearts around the nation ever since the Utah teenager was snatched from her bedroom and resurfaced nine months later.

Brian David Mitchell could face up to a life in prison when he is sentenced.

Elizabeth Smart gave a slight smile as she heard the guilty verdict then turned to her mother and both smiled.

The shackled Mitchell was present in the courtroom and sat singing throughout the reading so the verdict. He sang about Jesus Christ on the cross and held his hands in front of his chest as though he was praying.

Smart and her family have hoped for the guilty verdict and a long sentence to end the ordeal that began when she was taken from her Salt Lake City home at knifepoint and held captive for nine months when she was 14.

Smart, now 23, attended the entire trial and provided gripping testimony, describing how she woke up one night to the feel of a cold, jagged knife and being thrust into "nine months of hell" in a mountainside camp.

She said she was forced into a polygamous marriage and endured nearly daily rapes before she was found.

To the chagrin of the family, the case was delayed for years after Mitchell was declared mentally incompetent to stand trial in state court and a judge refused to order involuntary medications. Federal prosecutors later stepped in and took the case to trial.

The trial turned on the question of Mitchell's mental health -- something experts have debated since his arrest 2003, when state court evaluators began to study his religious writings and behavior, including courtroom antics such as singing hymns and shouting at judges to repent.

His lawyers did not dispute that he kidnapped Smart but wanted him to be found not guilty by reason of insanity. Such a verdict would have sent him to a prison mental hospital.

A parade of experts took the witness stand to say Mitchell had an array of diagnoses, from a rare delusional disorder and schizophrenia to pedophilia, anti-social personality disorder and narcissism.

Defense attorneys didn't dispute that Smart was kidnapped and held captive but contended Mitchell is mentally ill and can't be held responsible. Prosecutors countered that Mitchell was faking mental illness to avoid a conviction, labeling him a "predatory chameleon."

The thinly built Mitchell appeared in court everyday with long gray hair and an unruly beard down to the middle of his chest.

He was routinely removed from the courtroom after loudly singing hymns and Christmas carols and taken to another room to watch the proceedings on closed circuit TV. He kept his eyes closed in court and never spoke to anyone, including his lawyers.

The wrenching saga began when the Smart family awoke to the frightening realization that someone had slipped through the cut screen of a kitchen window on June 5, 2002, and whisked Elizabeth away in the night.

Within hours of the kidnapping, Smart testified, she was forced into a polygamous marriage with Mitchell, tethered to a metal cable and subjected to near-daily rapes while being forced to use alcohol and drugs.

Smart testified that she believed Mitchell was driven by his desire for sex, drugs and alcohol, not by any sincere religious beliefs.

Her abduction and improbable discovery while walking along a Salt Lake City street with Mitchell and his wife on March 12, 2003, riveted the nation and helped focus public attention on child abductions.

Mitchell was convicted of charges of kidnapping and unlawful transportation of a minor across state lines for the purposes of illegal sex.

He could be held at the mental facility until a psychiatrist determines he is no longer a threat to himself or society. At that point, a hearing would be held to see a judge agreed that Mitchell should be released.

The trial's most gripping testimony came from Smart and Wanda Eileen Barzee, Mitchell's estranged wife who pleaded guilty last year to federal and state charges in the kidnapping.

Barzee, 65, testified that she had believed Mitchell's religious revelations that led the couple to live homeless for nearly a decade, traveling the country on foot. She said she had obediently complied when he said God wanted him to "take a young girl by force" so they could practice polygamy.

"I told him that if the Lord didn't open the way, he didn't have to do it," a sobbing and penitent Barzee said during her nearly five hours on the witness stand.

Also troubled by mental illness, Barzee's competency issues were resolved after 15 months of involuntary treatment ordered by a state judge.

Barzee said she also told Mitchell they needed to obey the Lord's commandments then greeted Smart with open arms when Mitchell brought the young girl to the couple's mountainside camp near Salt Lake City.

It was Barzee who prepared Smart for the marriage ceremony, washing her feet and dressing her in handmade robes.

Subpoenaed by the defense, Barzee appeared devastated by her role in the kidnapping and the realization that she had been duped by her husband of 25 years.

"He was a great deceiver," she said.